BP is facing a revolt from its shareholders over the salary of its CEO Bob Dudley.

Just days after The Fed admitted “we got it wrong” on the “unequivocally good” low oil prices, BP has joined a long list of energy entities slashing jobs. The oil company will cut 4,000 jobs in exploration and production because of toughening market conditions “we need to take specific steps to ensure our business remains competitive and robust.”

The Fed got it wrong when it predicted a drop in oil prices would be a big boon for the economy. It turned out the world had changed; the US has a lot of jobs connected to the oil industry. The slump in oil prices has BP “concentrating minds on making the organisation more efficient” which means, as The FT translates, the ‘unequivocally good news’ of lower oil prices is accelerating plans for the oil giant to reduce its headcount. The Sunday Times reports, BP is to ax middle managers and freeze projects as Brian Gilvary, the finance director, said: “what you’ll see with this simplification plan is that headcounts are starting to come down across all of our activities in upstream, downstream and in the corporate centres — essentially the layers above operations.” Gilvary added that the company would slash the oil price assumption used to set its day-to-day budget.

BP will announce on Wednesday that hundreds of jobs will be lost at offices in London, Sunbury and Aberdeen as part of huge global staff cuts resulting from plunging oil prices and the Gulf of Mexico spill.

– BP Manager In Charge of Cleaning Up the Gulf Oil Spill – Instead of Actually Cleaning Up – Committed Insider Trading and Sold $1 Million of BP Stock Before the Extent of the Spill Became Public Knowledge (Washington’s Blog, April 18, 2014):

The Securities and Exchange Commission today charged a former 20-year employee of BP p.l.c. and a senior responder during the 2010 Deepwater Horizon oil spill with insider trading in BP securities based on confidential information about the magnitude of the disaster.  The price of BP securities fell significantly after the April 20, 2010 explosion on the Deepwater Horizon rig and the subsequent oil spill in the Gulf of Mexico, resulted in an extensive clean-up effort.

Two decades ago, I was the investigator for the legal team that sold you the bullshit that a drunken captain was the principal cause of the Exxon Valdez disaster, the oil tanker crackup that poisoned over a thousand miles of Alaska’s coastline 25 years ago on March 24, 1989.

The truth is far uglier, and the real culprit—British Petroleum, now BP—got away without a scratch to its reputation or to its pocketbook.

Just this month, the Obama administration authorized BP to return to drilling in the Gulf.

It would be worth the time of our ever-trusting regulators to take a look at my Exxon Valdez files on BP. They would see a decades-long pattern of BP’s lies, bribes and cover-ups that led, inexorably, to the Deepwater Horizon blowout—and that continue today within BP’s worldwide oil operations.

The financial penalties levied against BP for the Gulf oil disaster began as a landmark $4.5 billion settlement, topping the previous largest U.S. criminal penalty issued against Pfizer for marketing fraud. As the BP oil spill has continued to ravage the food chain and the environment, other rulings were added. The second ordered BP to pay $7.8 billion in payouts to businesses and tourist companies affected by the spill. The latter class action suit was signed off on by Judge Carl Barbier in a 125-page ruling. BP continues to face payouts from their $38 billion dollar allotment under SEC fines and fines under the Clean Water Act.

While these settlements are at least a record of BP’s guilt, families who have lost loved ones realize all too well that none of it amounts to what was truly lost.  To add insult to injury, BP is still in business; in fact, strong as ever. Just days after the EPA lifted their one-year ban, the company has been awarded 24 new contracts valued at more than $40 billion.

Just after the initial $4.5 billion fine was announced, Huffington Post sardonically noted the following: “BP Oil-Spill Fine So Horrible, BP’s Stock Price Only Rises 1 Percent,” One of the five ways they put this in perspective was the following:

A former Halliburton manager was sentenced to one year of probation on Tuesday for destroying evidence in the aftermath of BP’s fatal 2010 Deepwater Horizon blowout, which claimed 11 lives.

Anthony Badalamenti, former cementing technology director for Halliburton, which was BP’s cement contractor on the Deepwater Horizon drilling rig, had faced a maximum of one year in prison. The 62-year-old pleaded guilty in October to one count of destruction of evidence.

More shocking information down below. 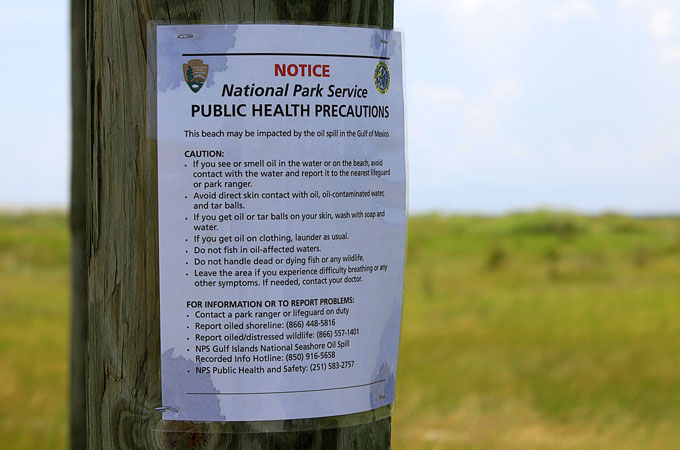 Nearly a year after the oil disaster began, Gulf Coast residents are sick, and dying from BP’s toxic chemicals.

“I have critically high levels of chemicals in my body,” 33-year-old Steven Aguinaga of Hazlehurst, Mississippi told Al Jazeera. “Yesterday I went to see another doctor to get my blood test results and the nurse said she didn’t know how I even got there.”

“I swam underwater, then found I had orange slick stuff all over me,” Aguinaga said. “At that time I had no knowledge of what dispersants were, but within a few hours, we were drained of energy and not feeling good. I’ve been extremely sick ever since.”

WKRG, Nov. 5, 2013: [Doctor Cova Arias, professor of aquatic microbiology at Auburn University and vibrio vulnificus expert] set out to discover if vibrio were present in tar balls. She was highly surprised by what she found as she studied tar on the Alabama and Mississippi coasts. “What was clear to us was that the tar balls contain a lot of vibrio vulnificus,” said Arias. […] “In general, (the tar balls) are like a magnet for bacteria,” said Arias. […] “What we also found was in water, the numbers were about ten times higher than the numbers that have reported before from that area,” said Arias. So the water alone had ten times as much vibrio as before the oil spill […] Doctors who fight infectious diseases, though, say the high levels of vibrio in and around tar balls should be taken seriously by everyone due to the random, but deadly, nature of bacteria. “It can be very little exposure,” said Dr. John Vande Waa, an infectious disease specialist at the University of South Alabama Medical Center in Mobile. “Just the wrong place at the wrong time.” BP disputes any tar ball – vibrio connection. […]

WKRG, Updated Nov. 11, 2013: “The destruction in arms and legs, the flesh eating component, it’s two parts ,” said Vande Waa. “One is that the organism itself can destroy the tissues. The other is sepsis . The bacteria is in their bloodstream, it affects all the organs. Within my own experience of the cases the mortality has been approaching 40-50 percent.” There have been almost two dozen cases of vibrio vulnificus in Alabama over the last five years. There have been more than 30 cases in Florida this year alone including the death of an Escambia County man. Vande Waa says as rare as vibrio vulnificus is, it’s something that should be taken very seriously. And that’s why the research being done by this at Auburn University, and at the school’s lab at Dauphin Island is so disturbing. […]