Jan. 1 (Bloomberg) — U.S. stocks plunged the most in 2008 since the Great Depression as financial shares collapsed, energy and metal producers tumbled and the world’s biggest economy suffered a yearlong recession.

“They will write about this year for a long time,” Duncan Niederauer, chief executive officer of New York Stock Exchange owner NYSE Euronext, said in an interview. “It’s been, in one word, tiring.” 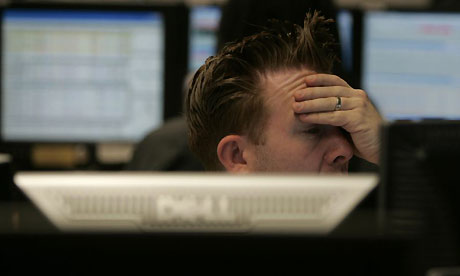 A trader reacts to the falling FTSE 100 at CMC Markets in London. Photograph: Alastair Grant/AP

A record $14 trillion (£9.7tn) has been wiped off world share values in 2008 as many stockmarkets around the world suffered their worst 12 months on record.

Turmoil in the financial system and the worst global recession since the 1970s have sent shares reeling. Global stocks, as measured by the MSCI index, have fallen by a record 44% over the year.

In London, the FTSE 100 index lost 31.3% in 2008, its worst annual decline since it was created in 1984, and following a 3.8% gain in 2007. It edged up 0.94% to 4434.17 on the last trading day of the year, a gain of 41.49 points. Banks, at the centre of the financial storm, were among the biggest losers ranging from HBOS, Royal Bank of Scotland and Lloyds TSB to Barclays. Mining companies Kazakhmys, Xstrata and Rio Tinto also fared badly as the economy worsened.

Investors pulled a net $32bn from hedge funds last month, making 2008 the first year in their recorded history that the funds have had significant outflows and ending the industry’s 18 years of asset growth.

Money has been taken out of funds following every strategy, even those – such as macro funds – which were showing returns, according to data from fund trackers Hedge Fund Research.

The funds enjoyed net inflows for the first part of the year, even as the financial crisis hit and traditional mutual funds began to show outflows.

However, in September a tide of redemptions began, according to TrimTabs, another fund tracker.

Conrad Gann, chief operating officer of TrimTabs, said: “We estimate outflows in November were $32bn, and there is an additional pipeline of redemptions that have not been filled, there could be $80bn [of redemptions] in December.

“There are $57bn of redemptions that we know are in, that are not reflected yet,” he said.

Read moreMoney flows out of hedge funds at record rate

The U.S. military is now spending more – on a constant dollar basis – than it did in 1968, when the Defense Department had more than 500,000 soldiers stationed in South Vietnam. If you include the cost of the wars in Iraq and Afghanistan, then the U.S. military spent about $580 billion in 2007; that’s about 33 percent more – again, measured in constant (year 2000) dollars – than the United States spent in 1968. Even without the cost of those ongoing wars, America’s military spending is higher now than at any time since 1945.

A recent study by the Center for Strategic and Budgetary Analysis, a Washington-based think tank, provides yet more sobering numbers. The report, written by the CSBA’s Steven M. Kosiak, concludes that “since 2001, some $904 billion has been provided to cover the cost of US military operations. This includes some $687 billion for Iraq, $184 billion for Afghanistan and $33 billion for various homeland security activities.”

Read moreCost for a single soldier to fight in Iraq or Afghanistan is about $775,000 per year

‘Hellhouse’ of personal data will be created, warns former DPP

The private sector will be asked to manage and run a communications database that will keep track of everyone’s calls, emails, texts and internet use under a key option contained in a consultation paper to be published next month by Jacqui Smith, the home secretary.

A cabinet decision to put the management of the multibillion pound database of all UK communications traffic into private hands would be accompanied by tougher legal safeguards to guarantee against leaks and accidental data losses.

But in his strongest criticism yet of the superdatabase, Sir Ken Macdonald, the former director of public prosecutions, who has firsthand experience of working with intelligence and law enforcement agencies, told the Guardian such assurances would prove worthless in the long run and warned it would prove a “hellhouse” of personal private information.

“Authorisations for access might be written into statute. The most senior ministers and officials might be designated as scrutineers. But none of this means anything,” said Macdonald. “All history tells us that reassurances like these are worthless in the long run. In the first security crisis the locks would loosen.”

Read morePrivate firm may track all email and calls