The Libyan government apparently wants to share its successful experience of overthrowing the Gaddafi regime with like-minded Syrians. It has sent 600 of its troops to support local militants against the Assad regime, according to media reports.

The fighters have joined the Free Syria Army, the militant group carrying out attacks on government forces in Syria, reports the Egyptian news website Al-Ray Al-Arabi citing its sources. The report says the troops entered Syria through Turkish territory.

The alleged incursion happened with the consent of the chairman of the Libyan National Transitional Council (NTC) Mustafa Abdul Jalil. The NTC allegedly welcomed volunteers to join the surge.

Last Friday British media reported a secret meeting between NTC envoys and Syrian rebels had been held in Istanbul. The Libyan governing body reportedly pledged to supply arms, money and fighters to the Syrians.

This video is from a Japanese evening news program broadcasted on Nihon TV, seven years after the Chernobyl accident (around 1993).

I hope the families in Fukushima who still hesitate to voluntarily evacuate their children will watch this and change their minds.

As expected, the Fed has just bailed out the world once again:

And as we have been writing every single day, the worldwide dollar crunch is now confirmed:

And finally, a promise to bailout Bank of America when it hits $4.00 again:

This means that the global situation is far, far more dire than the talking heads have said. Luckily, when this step fails, which it will, Mars can always come and bail us out.

The Bank of Canada, the Bank of England, the Bank of Japan, the European Central Bank, the Federal Reserve, and the Swiss National Bank are today announcing coordinated actions to enhance their capacity to provide liquidity support to the global financial system. The purpose of these actions is to ease strains in financial markets and thereby mitigate the effects of such strains on the supply of credit to households and businesses and so help foster economic activity.

Read moreAs Expected, The Federal Reserve Has Just Bailed Out The World Once Again!

Royal Bank of Scotland, Barclays and HSBC were among a slew of global banks that had their credit ratings cut by ratings agency Standard & Poor’s late last night.

(MoneyWatch) —Standard & Poor’s ratings service has cut the ratings of the six largest U.S. bank holding companies by one notch. JP Morgan Chase went from A+ to A; Goldman Sachs, Bank of America, Morgan Stanley and Citigroup were downgraded from A to A-; and Wells Fargo was cut from AA- to A+. Among the eight largest banks, only Boston-based State Street escaped unscathed.

The downgrades were part of more than 37 ratings of large global banks reviewed by the agency. S&P said that it had applied new standards to its methodology that focus on how institutions manage their businesses under market and economic stress. The new standards prompted a downgrade of 15 banks. Downgrades often raise the cost of borrowing for companies, as investors demand a higher interest rate to compensate them for additional risk.

… how many of the top 50 holders presented below, will be forced to sell once we get a 4 handle? We are certain of one thing, however: Paulson’s LP are simply delighted that he added to his loser position in BAC. Delighted. 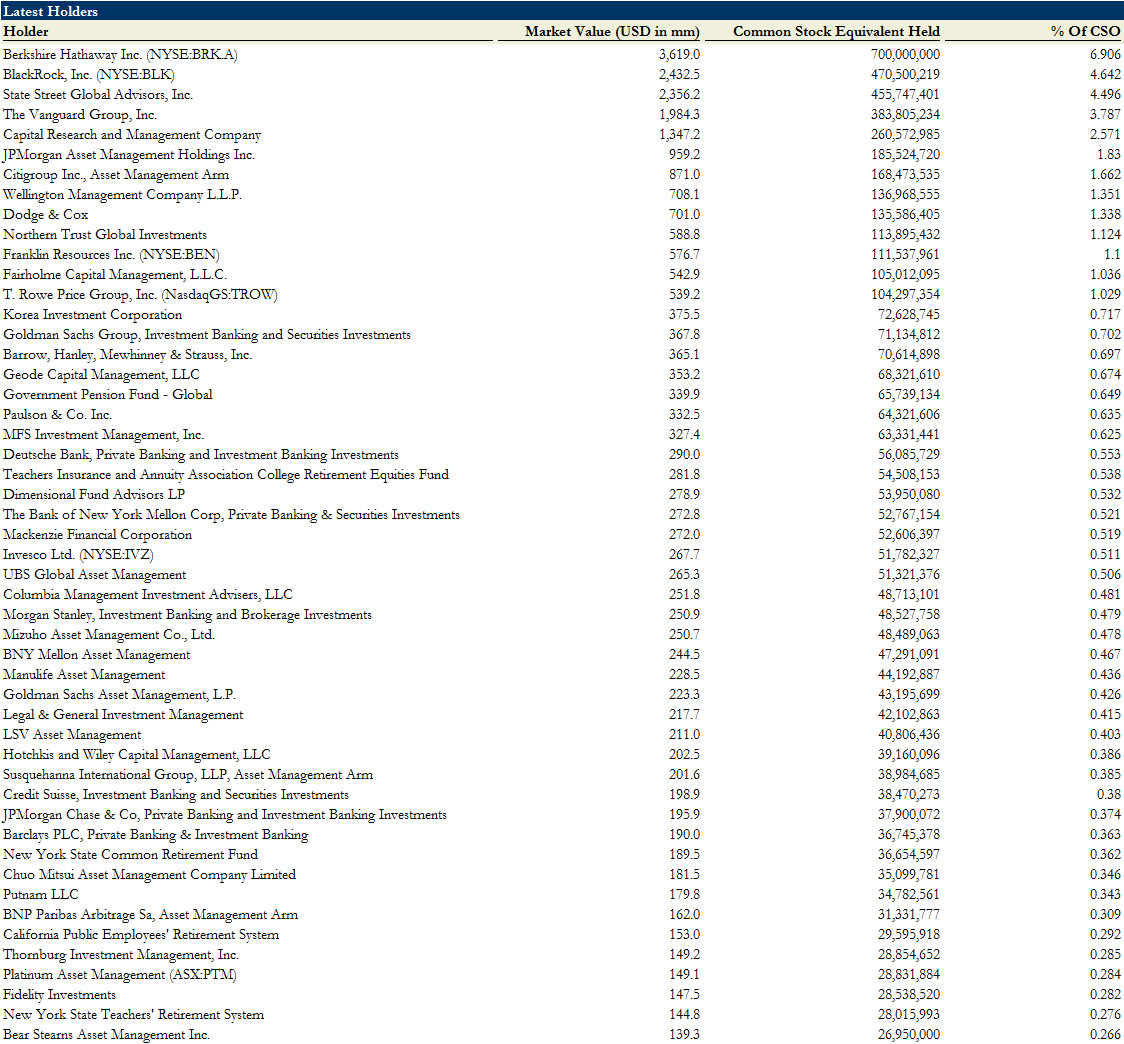 Bank of America now precisely at $5.00 following an after hours downgrade from A to A-. We note that BofA’s CDS widened 10bps today while MER CDS widened 18bps and notably wider (we haven’t seen runs post downgrade) and we wonder how this will impact the firm’s huge derivative book which was recently moved to the Bank’s higher rated, and deposit backed unit for its better rating support. In fact, following such a drastic action, it is quite likely that derivatives units across the board will see counterparties scrambling to demand a far greater cash cushion for fears of the same downgrade waterfalls that took down AIG and MF Global.

After a series of one-sided hearings, luxury goods maker Chanel has won recent court orders against hundreds of websites trafficking in counterfeit luxury goods. A federal judge in Nevada has agreed that Chanel can seize the domain names in question and transfer them all to US-based registrar GoDaddy. The judge also ordered “all Internet search engines” and “all social media websites”—explicitly naming Facebook, Twitter, Google+, Bing, Yahoo, and Google—to “de-index” the domain names and to remove them from any search results.

The case has been a remarkable one. Concerned about counterfeiting, Chanel has filed a joint suit in Nevada against nearly 700 domain names that appear to have nothing in common. When Chanel finds more names, it simply uses the same case and files new requests for more seizures. (A recent November 14 order went after an additional 228 sites; none had a chance to contest the request until after it was approved and the names had been seized.)

– Boss of Japan’s Fukushima nuclear plant rushed to hospital (but authorities say it’s NOT to do with radiation) (Daily Mail, Nov. 28, 2011):

The head of Japan’s Fukushima Daiichi nuclear plant which suffered the world’s worst atomic accident in 25 years earlier this year has been admitted to hospital, it emerged today.Masao Yoshida, 56, who was in charge when a massive earthquake and tsunami struck on March 11, will be replaced in his post as director from Thursday, plant operator Tokyo Electric Power Company (Tepco) confirmed.

An official declined to give details of Mr Yoshida’s illness, but told a news conference there was no indication it was caused by radiation exposure.

Mr Yoshida has been on the site for more than eight months since the disasters knocked out crucial cooling systems, causing reactor meltdowns.

The director of Japan’s damaged Fukushima nuclear power plant is stepping down due to illness, with officials refusing to confirm whether his condition is radiation related.

Masao Yoshida, 56, has been hospitalised for “treatment of illness” and will relinquish his director post at Fukushima Daiichi nuclear power plant in northeast Japan from Thursday.

His sudden departure without a specific medical explanation is likely to prompt speculation surrounding the possible connection between his medical condition and exposure to high radiation levels at the plant.

The government on Tuesday ordered a ban on the shipment of rice harvested in two more districts in Fukushima Prefecture, after tests detected dangerously high levels of radioactive cesium.

Chief Cabinet Secreatary Osamu Fujimura said the central government has instructed Fukushima Gov. Yuhei Sato to impose the ban on about 1,900 kg harvested in the Oguni district and 1,500 kg in the Tsukidate district, both in the city of Date.

On Monday, the Fukushima Prefectural Government announced that a combined 3,400 kg of unmilled rice harvested by two farms in the Oguni district and by one farm in the Tsukidate district contained between 580 and 1,050 becquerels per kilogram of radioactive cesium. The government’s limit is 500 becquerels.

In October, Gov. Sato officially announced that test results for rice at 1,174 spots in the prefecture, including Date, confirmed that Fukushima’s rice was not contaminated by radioactive materials and was safe to consume.

The initial inspections showed that 82 percent of the rice tested showed no traces of contamination, and the remaining samples contained radioactive cesium below the government-set limit.

And unlike in Onami District in Fukushima City, they are only testing one bag out of every 50. Some comfort. 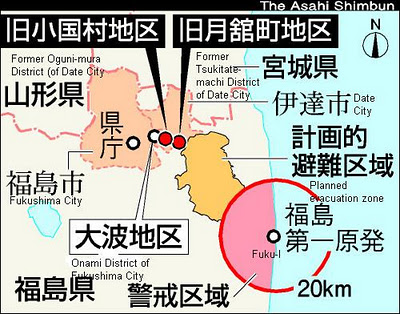 After radioactive cesium exceeding the provisional safety limit was detected in rice harvested in Onami District of Fukushima City (former Oguni-mura), Fukushima Prefecture announced on November 28 that rice from 3 farms in the adjasent areas of Onami District, former Oguni-mura and former Tsukidate-machi, both of which became part of Date City, was found with radioactive cesium exceeding the limit. Part of the rice has been sold in the market. The prefectural government has requested that the shipment of rice from these two districts to be voluntarily halted. The national government is going to order the halt of the rice shipment from the districts. 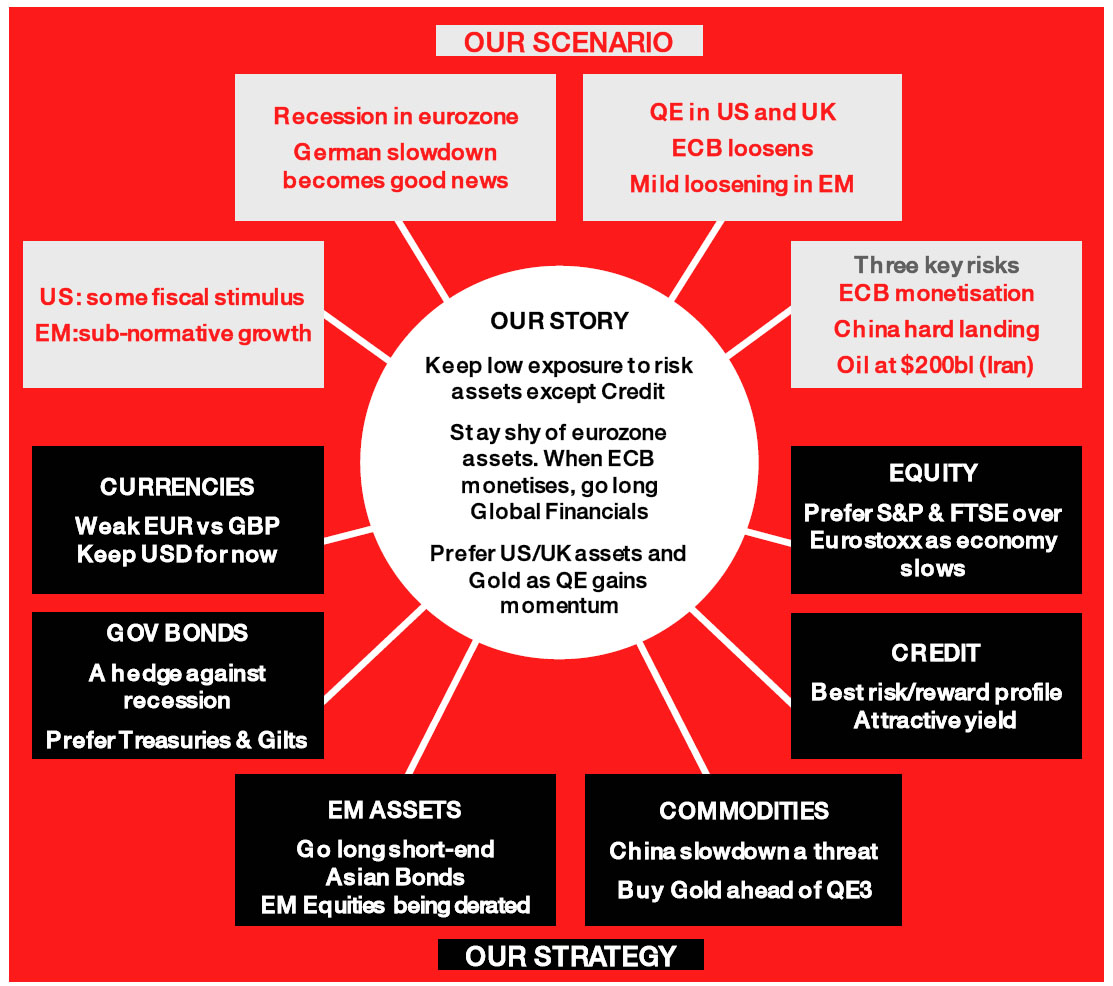 SocGen has released its much anticipated Multi Asset Portfolio Scenario/Strategy guide titled simply enough “Patience: bad news will become good news” where, as the insightful can guess, the French bank makes the simple case that the worse things get, the stronger the response by global central banks will be. Here is the key quote for those worried that : “A major liquidity crisis should not occur this time, as we think we are on the eve of major QE in the UK, US and (a bit) later on in the EZ.” We don’t disagree and if there is anything that can send BAC higher it will be the announcement of QE3. Of course, BAC will first drop to a $2-3 handle so question is who has the balance sheet to hold on to the falling knife. The next question is “How big will QE3 be”? Well, according to SocGen, the Fed will preannounce it in the January 2012 FOMC statement, the monetization will last from March 2012 until the end of the year, and will buy a total of $600 billion. We believe the actual LSAP total (not to be confused with the “sterilized” QE3 known as Operation Twist) will be well greater, probably in the $1.5 trillion range as the Fed will finally say “enough” to piecemeal solutions. As to what to do, besides going long some financial stock and hoping it is not the one that is allowed to fail, SocGen has some simple advice: “Buy gold ahead of QE3 as money creation has a strong impact on prices” – in other words just as we suggested yesterday courtesy of the Don Coxe correlation chart. Why gold and not BAC? Because, “Gold is highly sensitive to US QE, as every dollar of QE goes into M0, triggering the debasement of the USD. Gold = $ 8500/Oz: to catch up with the increase in the monetary base since 1920 (as it did in the early 80s). Gold = $1900/Oz: to close the gap with the monetary base increase since July 2007(QE1+QE2).” So go long a bank that may well go bankrupt and return nothing before it at best doubles, or go long a real asset, which will always have value and may quadruple in short notice? The answer seems simple to us…