Central banks have bought a record $1.5 trillion of financial assets in just the first five months of 2017, which amounts to $3.6 trillion annualized, “the largest CB buying on record.”

– Why “Nothing Matters”: Central Banks Have Bought A Record $1 Trillion In Assets In 2017:

Central banks (ECB & BoJ) have bought $1 trillion of financial assets just in the first four months of 2017, which amounts to $3.6 trillion annualized, “the largest CB buying on record.”

“In preparation for an eventual exit from stimulus, the BOJ last year started adding to its reserves to guard against bond losses, but if profits decline, there’s a chance that they won’t be able to continue that,” Japan Research Institute’s Kawamura said. “It’s a pretty dangerous situation now, even before they start to exit.”

– Here Is What Ben Bernanke Told The Bank Of Japan

– Deutsche Bank Unveils The Next Step: “QE Has Run Its Course, It’s Time To Tax Wealth”:

Helicopter money may be on the horizon, but if Deutsche Bank has its way, there is at least one intermediate step.

According to DB’s Dominic Konstam, now that the benefits QE “have run their course”, it is time for the next, and far more drastic step: “the ECB and BoJ should move more strongly toward penalizing savings via negative retail deposit rates or perhaps wealth taxes. With this stick would also come a carrot – for example, negative mortgage rates.”

If there was a sign that nothing else matters but central bank largess, this was it. The moment The Bank of Japan statement hit and proclaims “unchanged” a vacuum hit USDJPY and Japanese stocks. Reflecting that Japan’s economy has “continued a moderate recovery trend” which is utter crap given the quintuple-dip recession, Kuroda and his cronies said they will “add easing if necessary” and apparently that is not now. Not so much as a higher ETF purchase or moar NIRP.. and the aftermath is carnage – NKY -1000 points and USDJPY crashed to a 108 handle!!

– In Shocking Finding, The Bank Of Japan Is Now A Top 10 Holder In 90% Of Japanese Stocks:

The latest shocking example of just how intertwined central banks have become in all capital markets, comes courtesy of the Bank of Japan which days ahead of a move which may see it double its ETF purchases from the current run rate of JPY3.3 trillion to JPY7 trillion or more (if Goldman is correct), is revealed to be a top 10 holder in about 90% of all Japanese stocks. Crazier still, if as Goldman predicts the BOJ doubles its purchases of ETFs, the central bank could become the No. 1 shareholder in about 40 of the Nikkei 225’s companies by the end of 2017,

Back in October 2014, just after the BOJ drastically expanded its QE operation, we warned that the biggest risk facing the BOJ (and the ECB, and the Fed, and all other central banks actively soaking up securities from the open market) was a lack of monetizable supply. We cited Takuji Okubo, chief economist at Japan Macro Advisors in Tokyo, who said that at the scale of its current debt monetization, the BOJ could end up owning half of the JGB market by as early as in 2018. He added that “The BOJ is basically declaring that Japan will need to fix its long-term problems by 2018, or risk becoming a failed nation.” 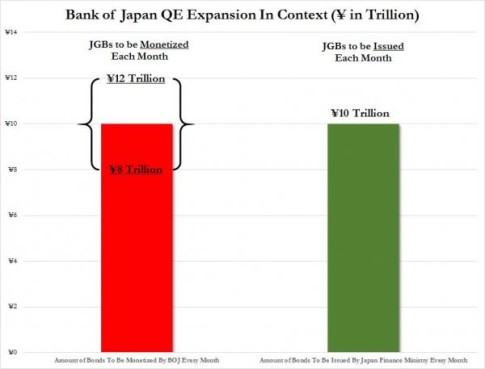 Which is why 17 months ago we predicted that, contrary to expectations of even more QE from Kuroda, we said “the BOJ will not boost QE, and if anything will have no choice but to start tapering it down – just like the Fed did when its interventions created the current illiquidity in the US govt market – especially since liquidity in the Japanese government market is now non-existent and getting worse by the day.”