Since 2010, The Bank of Japan has ‘openly’ – no conspiracy theory here – been a buyer of Japanese stock ETFs. Their bravado increased as the years passed and Abe pressured them from their independence to ‘show’ that his policies were working to the point that in September 2014, The BoJ bought a record amount of Japanese stock ETFs taking its holdings to over 1.5% of the entire market cap, surpassing Nippon Life as the largest individual holder of Japanese stocks.

Having stepped in a stunning 76% of days to ensure the market closed green, it appears, as Bloomberg reports, time (or money) is running out for Kuroda and the BoJ having spent 78 percent of its allotment as of Sept. 7. “They’ve only got a little bit left in their quota,” notes one trader, “The BOJ had a big role in supporting the market,” he implored, “if they don’t increase purchases now, it’s going to be a shock.” 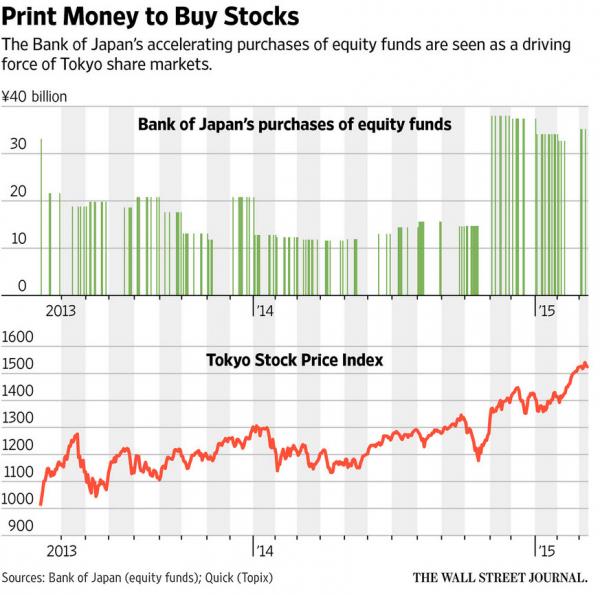 On Sept. 8, as the stock market slumped, investors were surprised to find the Bank of Japan, normally a buyer of exchange-traded funds on the Tokyo bourse, absent.

What happened? The central bank, which is authorized to purchase about 3 trillion yen ($25 billion) in equity ETFs a year, is running out of ammunition, having spent 78 percent of its total as of Sept. 7. Because the BOJ usually buys on days the market falls, it sped up amid a rout in the Topix index.

Now it must slow down for the rest of 2015 or increase its allotment, according to Mitsubishi UFJ Morgan Stanley Securities Co.

“They’ve only got a little bit left in their quota,” said Seiji Arai, a strategist at Mitsubishi UFJ Morgan Stanley Securities in Tokyo. “I think they’ll vow to increase yearly purchases by 1 or 2 trillion yen in October.”

With just 670 billion yen to go until its limit, the central bank has shrunk the amount it buys each time by 15 percent from its first purchase of the year to 31.7 billion yen in September. It stuck to that amount with a purchase on Thursday.

As the Topix recorded its worst monthly loss since 2012, the central bank purchased 302 billion yen in ETFs. Without that, the rout would have been much worse, according to Arai.

“The BOJ had a big role in supporting the market,” he said. “If they don’t increase purchases now, it’s going to be a shock.”