“Following the attempted coup on July 15, Turkey’s political landscape has fragmented further. We believe this will undermine Turkey’s investment environment, growth, and capital inflows into its externally leveraged economy. In the aftermath of the failed coup, we believe that the risks to Turkey’s ability to roll over its external debt have increased.”

– S&P Enters The Latest European Scandal: Downgrades Poland From A- To BBB+:

Over the past week, Poland’s relations with Europe have gone from cordial to abysmal, when first Poland’s new Eurosceptic government compared the EU and Merkel to Nazis, with Polish weekly Wprost releasing the following cover saying “they want to supervise Poland again”… 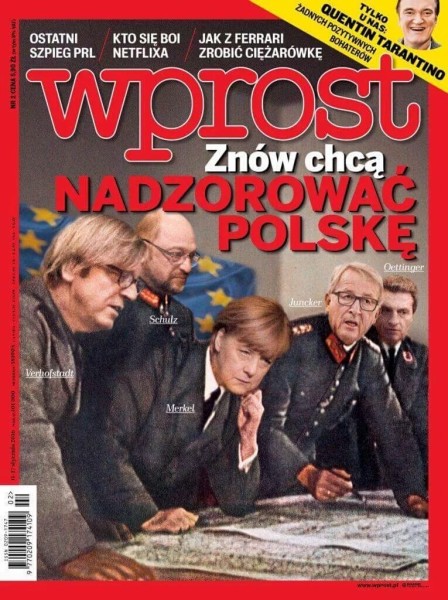 … only for Brussels to retaliate and launch an “unprecedented” review of Polish media laws, a move which Poland angrily responded is far beyond the EU’s domain.

Well, as so often happens, whenever there is a political spat in Europe, the rating agencies are quickly involved (thing S&P and Moody’s downgrades and upgrades of Greece depending on how well the vassal nation is “behaving”), and moments ago S&P downgraded Poland from A- to BBB+ outlook negative, precisely due to Poland’s new media law which has been the topic of so much consternation over the past week.

In other words, S&P is now nothing more than a lackey for Brussels, threatening to send Polish yields higher if Poland does not fall in line.

Having put Russia on review in mid-January, Moody’s has decided (somewhat unsurprisingly) to downgrade Russia’s sovereign debt rating to Ba1 (from Baa3) with continuing negative outlook. The reasons:

We assume the low external debt, considerable reserves, lack of exposure to US Treasuries, and major gold backing were not considered useful? Moody’s concludes the full statement (below) by noting that they are unlikely to raise Russian sovereign debt rating in the near-term.

Kind of ironic then that Russia is the best performing stock market in the world this year!!

– S&P Settles DOJ Lawsuit For $1.5 Billion; Agrees Not To Accuse Government Of Retaliation For US Downgrade (ZeroHedge, Feb 3, 2015):

As had been widely rumored in the past two weeks, and as the WSJ reported overnight, moments ago McGraw Hill, parent of disgraced rating agency S&P, entered into a $1.5 billion settlement to fully resolve the DOJ lawsuit regarding S&P ratings on RMBS and CDOs. As the WSJ reported overnight, In the “span of about 30 hours, the Justice Department lowered its asking price and backed off demands that S&P admit to violating laws when it issued rosy grades on risky mortgage deals, the people said.” But the bottom line: ‘S&P agreed to … withdraw its assertion that the Justice Department lawsuit was political retaliation for the ratings firm’s 2011 downgrade.”