Seemingly following the proposals of Bill Clinton (and Ron Paul), The Washington Post reports that a leaked document shows the Trump administration is planning to crackdown on current, and would-be, immigrants who are likely to require public assistance. 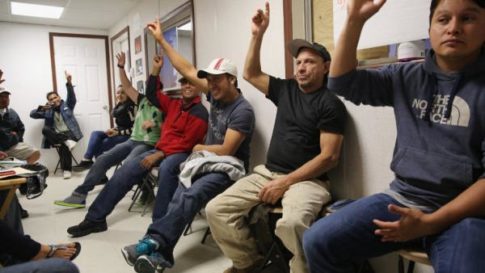 By all appearances notes SHTFPlan.com’s Mac Slavo, President Trump is doing his damnedest to turn around the economy, revitalize jobs and bring back prosperity. But the larger trends are already in place; the cycle is turning, and the bust cannot be put off forever.

Federal Reserve policy has literally set the country up for collapse, and though the central bank has been very creative in making the impossible work, and putting off disaster, nothing can hold back the flood forever.

Unfortunately, it looks like Trump may be blamed for a financial crisis that he didn’t cause. Analysts, including notably Brandon Smith, may be correct in pinpointing the attempt to use the new and highly controversial president as a scapegoat for the dirty work of the bankers.

The conditions are there, and the consequences were built in when the bubble was still being pumped up. Someday it will burst. When, how, and how bad remains to be seen.

Ron Paul: Economic Collapse Imminent – Trump will Get the Blame Instead of the FED

Authored by Jack Burns via The Free Thought Project blog,

If former Rep. Ron Paul (R-TX) is correct, an Economic Doomsday is here. The second financial bubble is going to soon burst, and there’s nothing anyone can do about it. That’s because, as Paul stated, the Federal Reserve has set up the American economy for financial collapse for printing trillions of dollars back in 2008 and 2009.

“The Federal Reserve’s policies of printing trillions of dollars back in ’08-09 have locked into place a serious financial crisis at some point in our future,” Paul stated. Going so far as to intimate the financial collapse will occur at least some time in the next two years Paul wrote, “It’s unavoidable, and even Donald Trump can’t stop it.”

Full out war between Democrats and the White House broke out today when Senate Democrats on Tuesday refused to attend a committee vote on two President Trump’s more controversial nominees, effectively delaying their consideration. Democrats on the Senate Finance Committee boycotted votes to advance Tom Price, Trump’s pick to head the Department of Health and Human Services, and Steven Mnuchin, his selection to head the Treasury Department.

Since at least one democrat must be on present for the vote to be held, the move will effectively delay and potentially prevent the confirmation votes on Mnuchin and Price.  The duo is among some of the more contentious selections to join Trump’s Cabinet. 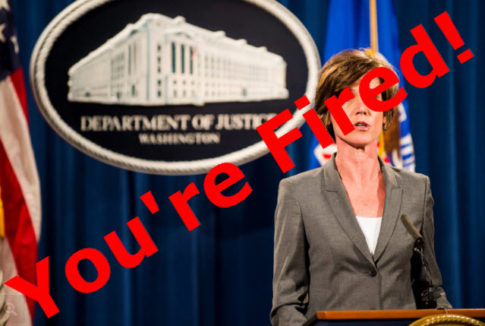 – Trump On A Roll, Fires Director Of Immigration And Customs Enforcement:

Having said the infamous words “you’re fired” once already this evening, when President Trump relieved acting AG Sally Yates of her duties just after 9pm Eastern, and perhaps realizing just how much he missed the sound, moments ago Trump also relieved acting Immigration and Customs Enforcement (ICE) Director Daniel Ragsdale, who was replaced with Thomas Homan, who previously led ICE’s “efforts to identify, arrest, detain, and remove illegal aliens, including those who present a danger to national security or are a risk to public safety, as well as those who enter the United States illegally or otherwise undermine the integrity of our immigration laws and our border control efforts.”

There was no immediate reason given for Ragsdale’s dismissal.

The full statement from DHS Secretary Kelly announcing Homan taking over as ICE Director is below.

Read moreTrump On A Roll, Fires Director Of Immigration And Customs Enforcement

Having backtracked on its proposal to ban green card holders from 7 mostly Muslim countries from entering the US, it now appears that the Trump admin has softened its stance regarding the admission of refugees, and according to Reuters, citing an internal DHS document, the U.S. government has granted waivers to let 872 refugees into the country this week, despite Trump’s executive order on Friday temporarily banning entry of refugees from any country.

It is unknown if there is a link between this waiver, and Trump’s announcement late last night to replace the acting director of the DHS’ Immigration and Customs Enforcement.

The other two threats were from radicalized Islam and from Russian President Vladimir Putin, who Verhofstadt said was also working against the progress of the EU project.

“We have a third front, for the moment, undermining the European Union, and it is Donald Trump,” Verhofstadt said in a speech at the Chatham House think-tank.

– US Sends Military Supplies To Syrian Alliance In First Under Trump Admin:

Confirming that the US role in the Syrian conflict is likely to expand in the coming months, Reuters reported that the U.S.-led coalition against Islamic State has supplied its Syrian allies with armored vehicles for the first time, expanding support since U.S. President Donald Trump came to office.

The armored vehicles and troop carriers had arrived four or five days ago, said Talal Silo, spokesman for the Syrian Democratic Forces (SDF) alliance, which includes the Kurdish YPG militia.

PHOTO: IAG Guardian armored vehicles given to the #SDF by US – @BarzanSadiq pic.twitter.com/TenYrBG0ip

Though the number was small, he said, “this is evidence that there are signs of new support”. “Previously we didn’t get support in this form, we would get light weapons and ammunition,” he said.

Just one week in office, President Trump is already following through on his pledge to address illegal immigration. His January 25th executive order called for the construction of a wall along the entire length of the US-Mexico border. While he is right to focus on the issue, there are several reasons why his proposed solution will unfortunately not lead us anywhere closer to solving the problem.

First, the wall will not work. Texas already started building a border fence about ten years ago. It divided people from their own property across the border, it deprived people of their land through the use of eminent domain, and in the end the problem of drug and human smuggling was not solved.