House Democrats wasted no time in slamming President Trump’s decision to fire the nation’s top law enforcer after she refused to carry out his directives barring refugees and those traveling from Muslim-majority countries. In a Monday night political thriller, the White House said former Acting Attorney General Sally Yates “betrayed” the Justice Department at the threat of national security and was ousted just hours after she ordered DOJ lawyers not to enforce Trump’s immigration order.

However, the Democrats saw a “more sinister motive”, and according to The Hill, warned that Trump is adopting a tyrannical approach that politicizes the Justice Department and will discourage federal employees from upholding their constitutional duties across all agencies. Democrat lawmakers compared last night’s termination of Yates (which was followed by Trump’s unexplained firing of the acting head of Immigration and Customs Enforcement), to Nixon’s 1973 purge of top officials who defied his wishes at the height of the Watergate scanda, also known as the “Saturday Night Massacre.”

“President Trump has commenced a course of conduct that is Nixonian in its design and execution and threatens the long-vaunted independence of the Justice Department,” said Rep. John Conyers (Mich.), senior Democratic on the House Judiciary Committee. “If dedicated government officials deem his directives to be unlawful and unconstitutional, he will simply fire them as if government is a reality show.”

He was not alone.

House Minority Leader Nancy Pelosi (D-Calif.) hailed Yates’s “courage” (which apparently prevented her from simply resigning in protest but had to engage the president knowing well how its would end) and accused Trump of acting recklessly “to get the answer he wants.” Rep. Steny Hoyer (D-Md.), whose Maryland district is heavy with federal workers, said the firing represents “an alarming step for an administration already raising serious questions about its competence to govern.” And Sen. Patrick Leahy (D-Vt.) warned Trump has set a “dangerous” precedent in ousting an official who simply disregarded an order that “is very likely unconstitutional.”

“President Trump has now put his Cabinet on notice: if you adhere to your oath of office to defend the Constitution, you risk your job,” said Leahy, a senior member of the Judiciary Committee.

Chuck Schumer tweeted late on Monday that the “firing of Sally Yates underscores how impt it is to have an Attorney
General who’ll stand up to the WhiteHouse when they violate the law.”

Firing of Sally Yates underscores how impt it is to have an Attorney General who’ll stand up to the WhiteHouse when they violate the law.

Meanwhile, shortly after Yates was fired, her replacement Dana Boente, US Attorney for the Eastern District of Virginia, moved quickly to rescind the guidance in Yates’ letter, noting in a statement released Monday night that the department’s Office of Legal Counsel “found the Executive Order both lawful on its face and properly drafted.” Boente then directed staffers “to do our sworn duty and to defend the lawful orders of our President.” 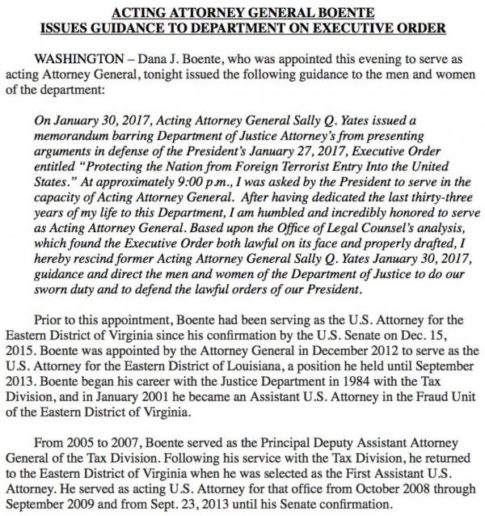 The fact that another AG disagreed with Yates, however, did not placate Democrats, who said that their – clearly political – concerns “transcend politics” and are warning that firing Yates before a successor is confirmed by the Senate creates a national security vacuum because she alone has the authority to approve requests with the Foreign Intelligence Surveillance Court, or FISA. Really, what they meant is that not having a clearly ideological AG takes away even more leverage from their position and forces them into a blocking opposition role.

“Terminating the only Senate-confirmed official at the Department of Justice who can sign FISA warrants simply because the President disagrees with her interpretation of the law is reckless and shortsighted, and it makes our nation less safe,” Hoyer said.

Trump’s nominee to head the DOJ, Sen. Jeff Sessions (R-Ala.), testified before the Senate Judiciary Committee earlier in the month. The upper chamber could vote on his confirmation as early as this week: he is expected to replace interim AG Boente in the coming days.