Décadence is also the title of a new book by the French philosopher Michel Onfray, in which he suggests that the Judeo-Christian era may have come to an end. He compares the West and Islam: “We have nihilism, they have fervor; we are exhausted, they have a great health; we have the past for us; they have the future for them”.

Archbishop Liberati belongs to a growing branch of Catholic leaders who refuse to see the future belonging to Islam in Europe. They speak in open opposition to Pope Francis, who does not seem too impressed by the collapse of Christianity due to falling birth rates, accompanied by religious apathy and its replacement by Islam. 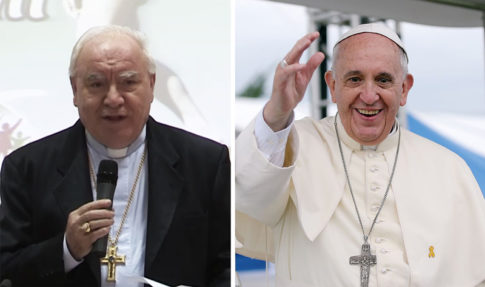 Monsignor Carlo Liberati, Archbishop Emeritus of Pompei (left) belongs to a growing branch of Catholic leaders who refuse to see the future belonging to Islam in Europe, and who speak in open opposition to Pope Francis (right).

Pope Francis’s official vision is personified by Bishop Nunzio Galantino, who was appointed by the Pontiff as the Secretary General of Italy’s Bishops. Last December, Galantino gave an interview in which he dismissed any religious motivation behind jihadist attacks and claimed that, instead, “money” is what is behind them.

There are now many Catholic commentators who are questioning the Church’s blindness about the danger Europe is facing. One is the cultural editor of the French magazine Valeurs Actuelles, Laurent Dandrieu, who writes:

“Islam has every chance massively to strengthen its presence in Europe with the blessing of the Church. The Church is watching the establishment of millions of Muslims in Europe… and Muslim worship in our continent as an inescapable manifestation of religious freedom. But the civilizational question is simply never asked …. By breaking away from the Europe’s indigenous peoples and their legitimate concerns, the Church is not only leading Europe to an impasse, it is also shooting itself in the foot”.

Dandrieu lists Pope Francis’ gestures and speeches in favor of Islam and migrants:

“On October 1, 2014, the Pope received Eritrean survivors of a shipwreck off Lampedusa; on 8 February 2015, he made a surprise visit to a refugee camp in Ponte Mammolo, northeast of Rome; on April 18, he used the first official visit of the new Italian president, Sergio Mattarella, to demand ‘a much larger commitment’ for migrants; on 6 September 2015, at the conclusion of the Angelus in St Peter’s Square, he called for ‘every parish, religious community, monastery and sanctuary in Europe to host a family’ of refugees; on March 24, 2016, he chose to celebrate the Holy Thursday in a structure housing 900 refugees, and to wash the feet to twelve asylum seekers; on May 28, he received children whose parents died in a boat that sank, filled with migrants; during the general audience of June 22, Francis went down to the crowd to bring back fifteen refugees”.

But as Liberati’s case demonstrates, resistance to Pope Francis’ vision of Europe is growing inside the Catholic Church.

“It is clear that Muslims have an ultimate goal: conquering the world”, Cardinal Raymond Burke said.

“Islam, through the sharia, their law, wants to rule the world and allows violence against the infidels, like Christians. But we find it hard to recognize this reality and to respond by defending the Christian faith (…) I have heard several times an Islamic idea: ‘what we failed to do with the weapons in the past we are doing today with the birth rate and immigration’. The population is changing. If this keeps up, in countries such as Italy, the majority will be Muslim (…) Islam realizes itself in the conquest. And what is the most important achievement? Rome”.

The first to denounce this dramatic trend was Italy’s most important missionary, Father Piero Gheddo, who said that, due to falling fertility and Muslim fervor, “Islam would sooner rather than later conquer the majority in Europe”. These concerns do not belong only to the Conservative wing of the Catholic Church.

Cardinal Christoph Schönborn, Archbishop of Vienna and a candidate tipped to be the next Pope, is very close to Pope Francis, and is a centrist. Last September, on the anniversary of the Siege of Vienna, when Turkey’s Ottoman troops nearly conquered Europe, Schönborn delivered a dramatic appeal to save Europe’s Christian roots. “Many Muslims want and say that ‘Europe is finished'”, Cardinal Schönborn said, before accusing Europe of “forgetting its Christian identity”. He then denounced the possibility of “an Islamic conquest of Europe“.

After a Tunisian, who arrived among a flood of migrants into Germany, murdered 12 people at a Christmas market in Berlin, the Catholic archbishop of the German capital, Heiner Koch, another “moderate” Catholic leader appointed by Pope Francis, also sounded a warning: “Perhaps we focused too much on the radiant image of humanity, on the good. Now in the last year, or perhaps also in recent years, we have seen: No, there is also evil”.

The head of the Czech Roman Catholic Church, Miloslav Vlk, also warned about the threat of Islamization. “Muslims in Europe have many more children than Christian families; that is why demographers have been trying to come up with a time when Europe will become Muslim”, Cardinal Vlk claimed. He also blamed Europe itself for the Islamic takeover:

“Europe will pay dearly for having left its spiritual foundations; this is the last period that will not continue for decades when it may still have a chance to do something about it. Unless the Christians wake up, life may be Islamised and Christianity will not have the strength to imprint its character on the life of people, not to say society”.

Among the Eastern Catholic bishops there are many voices raising concerns about Europe’s demographic and religious revolution. One belongs to the leader of the Catholics in Lebanon, who paid an extremely high price for the Islamization of their own country, including murder and exile, and now see the danger coming to Europe itself. “I have heard many times from Muslims that their goal is to conquer Europe with two weapons: faith and the birth rate”, Cardinal Bechara Rai said.

Another voice belongs to the French-born Bishop Paul Desfarges, who heads the diocese of Constantine in Algeria: “It’s no surprise that Islam has taken on such importance”, Desfarges said. “It’s an issue that concerns Europe”. Sydney Cardinal George Pell then urged “a discussion of the consequences of the Islamic presence in the Western world”. Pell was echoed by Laszlo Kiss Rigo, the head of the Catholic Hungarian southern community, who said that “they are not refugees, this is an invasion, they come here with cries of ‘Allahu Akbar’, they want to take over”.

On the political level, there is another a tendency, that of strong Catholic leaders who challenge Pope Francis on the Islamic question and immigration. The most important is the French presidential candidate François Fillon, one of the first politicians who “doesn’t hide the fact that he’s Catholic“. Fillon published a book entitled, Vanquishing Islamic Totalitarianism, and he rose in the polls by vowing to control Islam and immigration: “We’ve got to reduce immigration to its strict minimum,” Fillon said. “Our country is not a sum of communities, it is an identity!”

These politicians, bishops and cardinals might convince Pope Francis not to abandon Europe, the cradle of Christianity and Western civilization, to a looming dark fate. Michel Onfray wrote at the end of his book: “Judeo-Christianity ruled for two millennia. An honorable period for a civilization. The boat now sinks: we can only sink with elegance”. It is urgent now to prevent that. 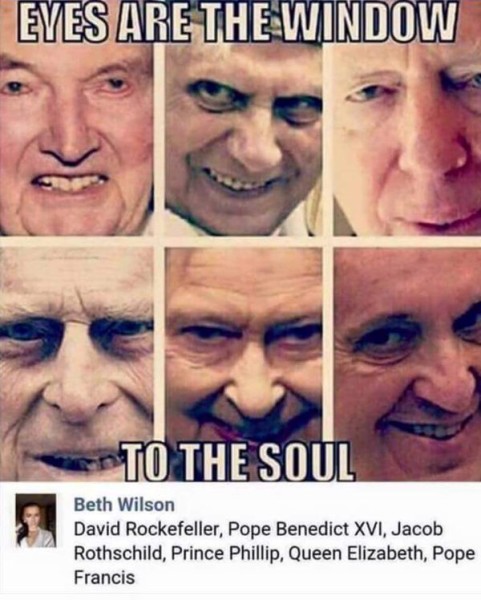