Maxwell faces up to 35 years in prison…https://t.co/9UxxU1oBeA

Is it time to install MIM-104 Patriots along the border?https://t.co/lWg3x0hclM 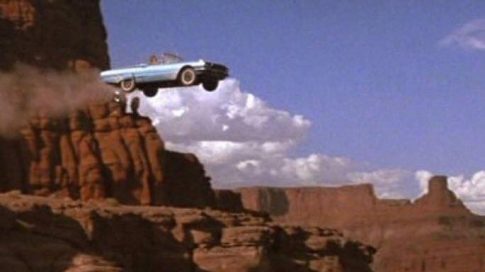 Have been warning you for many, many years now about the (planned) financial/economic collapse,…

The big question remains – what happens when the $600 CARES Act bonuses stop flowing?https://t.co/HWbUjLvtP4#Collapse

– Never Before Have I Seen So Much Fake Unemployment & Jobs Data by the Bureau of Labor Statistics. Labor Department Nails It:

BLS under-reported unemployment by 13.7 million, based on data from the Labor Department. What’s happening is infuriating. Read and cringe.

Normally, the jobs report by the Bureau of Labor Statistics is released on the first Friday of the month. And the unemployment claims report is released Thursday every week. But this month, the monthly jobs report was also released today because of the 4th of July weekend. And now we have this delicious situation of both reports on the same day, with the Labor Department’s unemployment insurance data – people who are actually receiving unemployment benefits under state and federal programs – calling the Bureau of Labor Statistics’ survey-based report a liar. And we’ll go through them.

What the Labor Department reported today:

The total number of people who continued to receive unemployment compensation in the week ended June 27 under all state and federal unemployment insurance programs, including gig workers, surged by 937,810 people in the week, to 31.49 million (not seasonally adjusted), the highest and worst and most gut-wrenching ever: 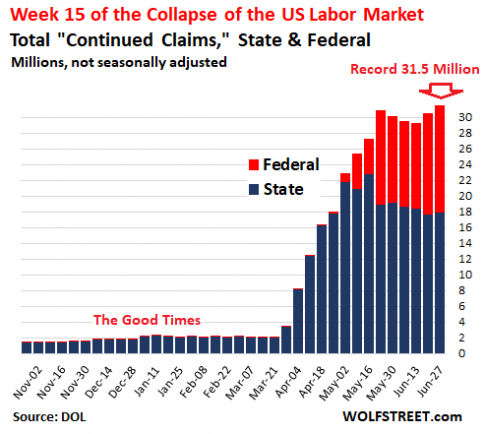 The number of people receiving state unemployment insurance (blue columns in the chart above) has essentially been flat for three weeks (it ticked up this week), as many people got their jobs back while many other people were newly laid off. But the number of people on federal unemployment programs, including gig workers (red columns), has been soaring.

What the Bureau of Labor Statistics reported today:

Incredibly, given the record number of unemployment insurance recipients, the Bureau of Labor Statistics dared to claim that the number of unemployed fell by 3.2 million in June, to 17.8 million, after having already, incredibly, fallen by 2.1 million in May, making it a 5.3 million decline over two months. The BLS claims to have obtained these numbers through its surveys of households.

Given that a record 31.5 million people were actually receiving state and federal unemployment insurance benefits in the latest week and that this record number of people were actually unemployed, as per the Labor Department, the BLS is now under-reporting unemployment by at least 13.7 million people (31.5 million minus 17.8 million). What a sad joke: 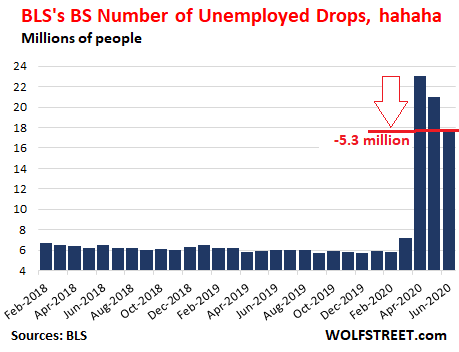 In the same vein of nonsense, the BLS, based on surveys of employers, reported this morning that the number of jobs jumped by 4.8 million in June, despite continued announcements of mass layoffs, after having already jumped by 2.7 million in May, for a total of 7.5 million jobs added on net since the April low. Meaning that even as millions of people get laid off every month, many more millions of people are getting their jobs back or are getting new jobs, according to the BLS.

This flies in the face of the record 31.5 million people now receiving unemployment insurance under state and federal programs.

Read moreNever Before Have I Seen So Much Fake Unemployment & Jobs Data by the Bureau of Labor Statistics. Labor Department Nails It

What drives the civil unrest we see unfolding in the streets today? Is this an organic form of resistance against an oppressive system of control? Or is there an ulterior motive striving to restructure the current system of control under the guise of social and racial injustice?

Many are afraid to ask these questions because they may be labeled a racist, for daring to question the legitimacy of the groups who seem to defy the rule of law with complete immunity from the judicial system. At the same time they receive the endorsement of political leaders, celebrities and mega corporations.

In this report Spiro is joined by Rosa Koire, a top expert on the United Nations Agenda 21 who authored the book titled ‘Behind the Green Mask: U.N. Agenda 21′

Spiro and Rosa Koire discuss and break down how the United Nations’ long standing global governance agendas are materializing before our eyes hidden just beneath the veil of global crisis and social injustice.

Roosevelt Statue To Be Removed From NYC's Museum Of Natural History

– America is now a FAILED STATE… no rule of law, no police, no leadership, no free speech, no functioning markets and no equal protection under the law… YOU ARE ON YOUR OWN