Complete control over humanity coming to all countries near you…

via the New York Times:

Bill Gates Met With Jeffrey Epstein Many Times, Despite His Past 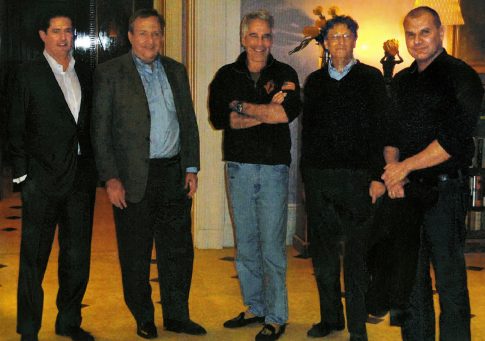 “They have taken the bridge and the second hall. We have barred the gates but cannot hold them for long. The ground shakes, drums… drums in the deep. We cannot get out. A shadow lurks in the dark. We can not get out… they are coming.” pic.twitter.com/76GG9Ux7qo

"They have taken the bridge and the second hall. We have barred the gates but cannot hold them for long. The ground shakes, drums… drums in the deep. We cannot get out. A shadow lurks in the dark. We can not get out… they are coming." pic.twitter.com/76GG9Ux7qo

Additionally to all the extremely detrimental health effects caused by ‘normal’ vaccines, you better ‘hope’ that your child is not already sick, when the vaccine is released at its predetermined time. For those wary of vaccines to begin with, researchers are developing a new type of injection that is even more concerning than multiple individual shots.

As Luke Dormehl of Digital Trends writes, “engineers at the Massachusetts Institute of Technology are coming to the rescue with a new 3D fabrication technique that could allow for multiple doses of a drug or vaccine to be delivered to a patient over an extended period of time — with just one jab needed.”

We figured out a way to make tiny polymer cups, smaller than a grain of sand, that can be filled with any drug, including vaccines. Once filled, these cups are sealed with a lid made from the same material, and the drug or vaccine is protected inside. Because the microparticles are so small, hundreds can be injected into the arm just like any vaccine. Once in the body, the cups stay closed and open up at a predetermined time, releasing the drug or vaccine. This is exciting because one can fill the different cups with essentially all the vaccines and boosters, and potentially have the 10 to 20 required vaccinations all in one shot.

“These particles are made of a U.S. Food and Drug Administration-approved polymer, which degrades once inside the human body, and allows each one to be “programmed” to degrade at a different time” writes Dormehl. “In experiments involving mice, the researchers showed that the particles injected during one injection could release their contents — with no early leakage — at intervals of 9, 20, and 41 days.”

– Bill Gates, Jeff Bezos and Warren Buffett own more wealth than the poorest half of the US:

The three wealthiest people in the United States – Bill Gates, Jeff Bezos, and Warren Buffett – own more wealth than the entire bottom half of the American population combined, a total of 160 million people.

The three business moguls have a total wealth of $248.5bn (£189bn), while America’s top 25 billionaires together hold $1tn in wealth – about the same amount as 56pc of the US population combined.

– 30mn people dead in a year: Bill Gates warns of potential bioterrorism dangers in next 15 years Among the Podesta emails released today, one of the more interesting disclosures comes from a March 17 email from John Podesta to [email protected], aka Hillary Clinton, which laid out a list of potential Vice Presidential nominees for Hillary. The list of 39 names, “organized in rough food groups,” with regard to their gender, race or career; includes some interesting names: – Yes, They Really Do Want To Reduce The Population – 22 Shocking Population Control Quotes From The Global Elite That Will Make You Want To Lose Your Lunch:

Most Americans have absolutely no idea, but a very dark philosophy is spreading like wildfire among the global elite.  This philosophy is an obsessive belief that humanity has become a cancer that is destroying the earth.  There are now large numbers of global leaders that are convinced that the exploding population of the world has become like a virus or a plague, and that it must be combated as such.  In fact, it would be very difficult to understate just how obsessed many members of the global elite are with population control.  The United Nations puts out position papers about it, universities have entire courses dedicated to it, radical population control advocates have been appointed to some of the highest political positions in the world, and some of the wealthiest people on the planet get together just to talk about it.  Those who believe in this philosophy are constantly talking about the need for “increased access” to abortion, contraception and other “family planning” services.  But even with all of their efforts, the population of the world is still expanding and those who believe in this population control philosophy are getting nervous.

Read moreYes, They Really Do Want To Reduce The Population – 22 Shocking Population Control Quotes From The Global Elite That Will Make You Want To Lose Your Lunch – Bill Gates says we need higher taxes to help the poor. Jeremy Paxman asks why Microsoft have comitted to Tax Avoidance. Hypocrisy at its finest.:

We don’t really need higher taxes for any purpose though. We don’t have a balanced budget. So “there’s only so much money to go around” is a false proposition.

The availability of money is not the problem.