A month ago, US and Russian military officials signed a memorandum of understanding that included steps their pilots should take to avoid an inadvertent clash over Syria as they carry out separate air strikes against armed groups. That MoU has now been shredded, as it certainly did not involve Russian fighter jets operating above Syria being armed with short and medium range air-to-air missiles as a direct threat to other fighter jets also operating above Syria – mostly those of Turkey, France and the US.

Which is precisely what Russia has done as disclosed in an announcement moments ago by the Russian defense ministry, and furthermore, has released a clip as a warning to not only Turkey, but all NATO forces in the region, that any further provocations at its jets will be met with an immediate and proportional response.

“They worked it out….why can’t we?

This bastard is financing the immigration crisis, funding illegal shippers of innocents as part of his “Destroy Europe” plan….”

– Russia Bans Soros Foundation As A “Threat To National Security And Constitutional Order”:

Following Russia’s official retaliation to the Turkish downing of its jet a week ago, in which Putin issued an executive order limiting employment for Turkish workers, restricting Turkish organizations, and reducing the amount of bilateral trade with Ankara, perhaps a far more notable development took place earlier today when the Russian Prosecutor General’s Office issued a statement in which it recognized George Soros’s Open Society Institute and another affiliated organization as “undesirable groups”, banning Russian citizens and organizations from participation in any of their projects.

In a statement released on Monday, prosecutors said the activities of the Open Society Institute and the Open Society Institute Assistance Foundation were a threat to the foundations of Russia’s Constitutional order and national security. They added that the Justice Ministry would be duly informed about these conclusions and would add the two groups to Russia’s list of undesirable foreign organizations. 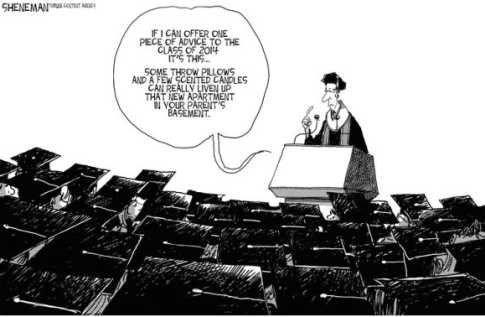 Three weeks ago, we noted with some alarm that the number of women age 18 to 34 living with their parents is now the highest since record keeping began more than seven decades ago. Now, according to the latest data from the Commerce Department (which someone clearly forgot to double seasonally adjust), we discover that nearly a fifth of males aged 25-34 live in their parent’s basement while the aggregate number for the 18 to 34 bracket inclusive of both women and men rose to 31.5% as of March.

So let’s just be clear about what’s going on here, because it would be a shame if the absurdity was lost on anyone. In January 2014, MIT loaded up some trucks with weapons bound for militant groups operating in northwestern Syria. Those trucks were stopped at the border by police who were subsequently threatened by intelligence agents who accompanied the drivers. Erdogan has now charged the officers with “forming and leading an armed terrorist organization,” when in fact they were doing the exact opposite. That is, they were trying to keep several truck loads of weapons from reaching armed terrorist organizations.

As you can see, there are no limits on what Erdogan will do to suppress dissent and cover up Ankara’s role in implicitly supporting terrorism by arming militants in Syria.

It’s worth noting that the FSA has become nothing more than a kind of catch-all excuse for flooding Syria with weapons. As al-Jazeera reported earlier this month, the group is beset with defections and “nowhere is [the dissatisfaction] more apparent than in Aleppo, where many FSA soldiers are leaving the group, citing inadequate pay, family obligations and poor conditions.” Still, the media manages to portray them as a well-organized group of battle-hardened, “moderate” warriors who have a very real chance at battling the Russians and Iranians to a stalemate (they’ve rejected Russia’s overtures regarding teaming up to fight ISIS) on the way to negotiating for a transition away from the Assad government. This characterization allows Washington and its regional allies to justify the hundreds of millions in guns, ammo, and funding that to this day flows into the country unimpeded. Whether or not all of that goes to the FSA or the Kurds or whether, like Erdogan’s MIT trucks, it all could be going to the very same groups who organize and execute attacks on Western civilians is an open question that will likely never be answered.

– Are These The Tankers Bilal Erdogan Uses To Transport ISIS Oil?:

– Morgan Stanley Throws In The Permabullish Towel, Says It Is “Feeling Worse, But Not Sure Can Explain It””:

Stiffer capital rules, a slump in client transactions and a shift toward electronic trading have crimped margins in key fixed-income markets, pushing banks to pull back and eliminate staff… and amid a 42% collapse in fixed-income revenue in Q3, Morgan Stanley is taking action:

The cuts are said to be worldwide and will happen with two weeks (just in time to watch the carnage unleashed by The Fed).

Read moreMorgan Stanley Throws In The Permabullish Towel, Says It Is “Feeling Worse, But Not Sure Can Explain It””

– HSBC Whistleblower: The Biggest Bank Fraud in British History Carried Out on UK Shoppers and Covered Up:

“In my position, as you can imagine, I’ve got a few enemies.” An anonymous tip off has contacted the DWP to suggest that Nicholas Wilson is frauding the benefits office. “They sent a letter calling me in for a compliance interview.”

The irony is that Nicholas Wilson is a whistleblower, who has been trying to expose what would be the largest bank fraud in the history of the UK, totalling over £1bn. This is made up of illegal charges imposed by HFC Bank – previously a subsidiary of HSBC, onto unsuspecting UK customer debts on high street store cards.

“Everything I do on my campaign with HSBC, it’s all about fraud and corruption and underhand dealings. I do everything up front and transparent and that’s how I have to be. I haven’t got anything up my sleeve.”

Read moreHSBC Whistleblower: The Biggest Bank Fraud in British History Carried Out on UK Shoppers and Covered Up

– VIDEO: Off-Duty Cop Rams His SUV Into Man’s Car For Trying To Hold Him Accountable For Reckless Driving:

Newly released surveillance video shows an off-duty Montreal police officer ram his SUV into a man’s car who was attempting to hold him accountable for speeding through a stop sign and driving recklessly.

The incident occurred on January 14, 2015, but surveillance video has only now been released.

Jeffery Pokora says the man in the SUV, who was later determined to be SPVM Police Officer Mr. Roberto Tomarelli, sped through a stop sign and cut him off, he responded by following the man to his home and attempting to hold him to account.

– Steering the Masses Towards Total War:

It goes without saying that the atrocities of Paris on November 13, 2015 were unspeakable and sickening. But what is not being said in the wake of the incident—what has been ignored by the mass media—is predictably telling and ominous.

As in the wake of 9/11, the people of the world are being provoked, agitated and mobilized; the fear, horror, rage and shock channeled and shaped into wave of collective vengeance and hatred. Hatred towards what and whom?