Which Can Be Bought & Sold Apparently…

How Many Times Were You Swabbed The Past 2 Years?

Archive copy of the link; https://archive.ph/aoTC0

– The Pfizer Effect: Hundreds of Thousands of People are dying due to COVID Vaccination every week according to official Government data

– Over 23,000 Children have died across Europe since the EMA first approved the Covid-19 Vaccine for Children according to official data

– While you “Stayed at Home to Protect the NHS”, your Government killed the Elderly & Vulnerable, then lied by telling you they were COVID Deaths; & Documents prove it was years in the planning

New research published in the journal Science Translational Medicine reveals that Big Pharma is now using insects to deliver “vaccines” to humans without their knowledge or consent.

For their trial, researchers artificially furnished 200 mosquitoes with live, malaria-causing plasmodium parasites that had been genetically modified (GMO) to inject a malaria vaccine into the arms of human test subjects.

The stated goal of the project is to deliver vaccines via bugs as opposed to traditional syringes, in this case with GMO mosquitoes that will be released into the wild to randomly inject as many people as possible with the poisons. (Related: Starting in 2020, a two-year, Bill Gates-backed project began releasing more than 750 million GMO mosquitoes throughout the Florida Keys.)

“We use the mosquitoes like they’re 1,000 small flying syringes,” bragged Dr. Sean Murphy, a Seattle physician and scientist, and lead author of the paper, which was published on August 24.

Seattle, by the way, is where Bill Gates lives, along with Microsoft, a multinational corporation he helped co-found. It is hardly surprising, in other words, that the trial took place there.

GMO mosquito made participant sick with malaria, which was supposedly impossible

Have been warning you for many years about the planned financial/economic collapse & hyperinflation,…

…which will be directly followed by planned revolution & all-out civil war,…

…which will be directly followed by planned WW3.

WW3 will be brought to an abrupt end by the onset of massive earth changes.

The grid will go down and people will live in 1850 for quite a while.

So cryptos will become totally worthless. Keep that in mind, when investing into cryptos.

Food, water, survival gear and the ability to protect your family & friends will be of the utmost importance.

– How I built my ultimate 25 pound bug out bag

Prepare yourself physically, mentally and spiritually.

A golden age is coming after all of this and it is predicted that those who will live to see it will be like saints.

They want you physically and mentally weak, isolated, lonely, forever in debt, without god, without gender, without children, depressed, anxious, afraid, obese, addicted to drugs, eating cockroaches, wearing masks, living on rent, and be dependent on the state for everything.

They want you physically and mentally weak, isolated, lonely, forever in debt, without god, without gender, without children, depressed, anxious, afraid, obese, addicted to drugs, eating cockroaches, wearing masks, living on rent, and be dependent on the state for everything. 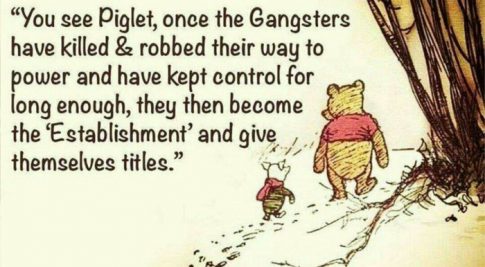