– Emergency Medical Teams ORDERED To STAND DOWN While Kids Bled Out After Florida Shooting:

If you think like most, not much about the Parkland, Florida school shooting has added up so far. Now there are reports that the responding emergency medical teams sent in to save lives after the horrific shooting were told to “stand down” while some of the students bled out.

It’s becoming increasingly obvious to every intelligent observer that someone wanted to maximize the body count from the shooting.

Here are four irrefutable facts about the shooting that simply make it look like the body count needed to be higher:

Update: US Senator Ben Sasse (R-NE). a member of the Senate Judiciary Committee, issued the following statement regarding President Trump’s comments today on due process and the Second Amendment:

“Strong leaders don’t automatically agree with the last thing that was said to them. We have the Second and due process of low for a reason.

We’re not ditching any Constitutional protections simply because the last person the President talked to today doesn’t like them.“

President Trump told a group of lawmakers that they must do something to keep guns away from mentally ill individuals – even if that means raising the minimum age for rifle ownership to 21, Bloomberg reports.

His remarks appeared to contradict a CNN report from earlier in the week, which quoted anonymous White House aides saying Trump would soon walk back his support for raising the age limit.

But on Wednesday, in what the New York Times characterized as a “shocking” break with his Republican Congressional allies, Trump told lawmakers during a televised meeting in the Cabinet Room that easing gun owners’ ability to carry concealed weapons across state lines, a provision of the House-passed gun bill and the NRA’s top legislative priority, should be part of a separate bill, a strategy favored by Democrats. The House bill combining background check provisions with the loosening of concealed carry rules has stalled in the Senate after passing the House. Instead, Trump said he supports the proposal from Sens. Joe Manchin, D-W.Va., and Pat Toomey, R-Pa., which he says is best positioned to pass. Sen. Amy Klobuchar agreed that the Manchin-Toomey bill is a “good place to start.” 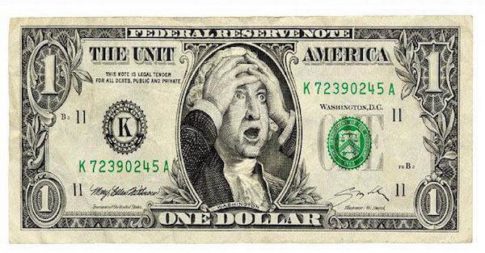 Earlier this month, the United States government released its annual financial report for the year 2017.

This is something the government does every year, similar to how large companies like Apple, or Warren Buffett’s Berkshire Hathaway, publish their own annual reports.

Unlike Berkshire and Apple, though, whose financial reports typically show strong, positive results, the US government’s financial statements are a complete horror show.

Right at the beginning of the report, the government explains that it’s “net loss” for the year was an unbelievable $1.2 TRILLION.

It’s larger than the size of the entire Australian economy… and constitutes a loss of more than $2.2 million per minute.

Censorship is here.  If you’ve ever wondered what it might have been like to not support the Nazi movement while living in Germany in 1942, it’s exactly what it looks like questioning the mainstream media’s “official narrative” in 2018.

It is now common to associate Hitler’s dictatorship with many forms of repression, including the broad use of censorship. Indeed, long before his appointment in January 1933, he and his comrades promised that they would cleanse the nation of the decadence they saw in all the arts and sciences. Although the democratic Weimar Republic had abolished censorship in its constitution, on 25 March 1930 its parliament revised the law for the protection of the republic. Henceforth the government had the right to dissolve organisations and limit speech, and this was easily abused. Decrees soon followed that allowed banning books for up to eight months, and another decree could stop publications deemed to be “untrue” or to have used “distorted facts” [“fake news”] that slandered leading state officials. Thus, Germany was already losing its liberal self-confidence in the last days of Weimar, and these measures opened the door for the clampdown the Nazis had in mind. –Times Higher Education

Have you ever seen YouTube scrub a video about the flat earth movement? No. And can you guess why? Because they don’t need to, everyone can see that all the other planets, the moon, and the sun are globes.  Earth is too; why would it be the only disc in a solar system of globes? Basically, there’s no need to take down those fake videos because people know the truth and the “powers that be” don’t care if we fight about the shape of the Earth.  But YouTube does remove real eyewitness accounts if it doesn’t match the mainstream media’s official narrative. And they do care a great deal about hiding the truth from viewers.

Earlier today, SHTFPlan uploaded a YouTube video that has since been scrubbed, with a warning in the article that the videos embedded are likely to be censored by YouTube. This was that video:

Watch it while you can.

The video was in an article about the mainstream media’s desperate attempt to manipulate public opinion to gather support for gun control. This all simply censorship designed to manipulate. Anyone who simply asks a question or provides evidence that the media is not telling the truth is mocked as a “conspiracy theorist.” But the questions are still real, and the media still hasn’t provided adequate answers.

Along the Israeli-Lebanon border, it’s about to get 2006 all over again.

At least that’s what Senator Lindsey Graham told reporters late Tuesday at a press conference with Democratic Sen. Chris Coons – with whom he sponsored a bipartisan immigration bill that ultimately failed to garner enough support from their fellow lawmakers. The press conference was called to share details about a bipartisan trip last week to the Middle East.

Graham of South Carolina told reporters that Israeli officials made it clear to visiting lawmakers last week that the IDF will need to launch a military action in Southern Lebanon if Hezbollah continues work on a guided-rocket factory being built in the region – a factory that’s purportedly being funded by Iran, according to Bloomberg.

“They’ve told us in no uncertain terms that if this threat continues – they keep making rockets that can hit the airport and do a lot of damage to the state of Israel – they are going to have to go in,” Graham said.

– Intelligence Veterans Warn of Growing Risk for War With Iran Based on False Pretexts:

(CN) — As President Donald Trump prepares to host Israeli Prime Minister Benjamin Netanyahu next week, a group of U.S. intelligence veterans offers corrections to a number of false accusations that have been leveled against Iran.

MEMORANDUM FOR:  The President

In our December 21st Memorandum to you, we cautioned that the claim that Iran is currently the world’s top sponsor of terrorism is unsupported by hard evidence. Meanwhile, other false accusations against Iran have intensified. Thus, we feel obliged to alert you to the virtually inevitable consequences of war with Iran, just as we warned President George W. Bush six weeks before the U.S. attack on Iraq 15 years ago.

– YouTube is Now ThemTube: Time to Flee the Failed Platform:

Hey, did I mention that YouTube is involved in all-out warfare against independent news sources? Oh, I have? Multiple times? Well, here it is again. If you only get my info from ThemTube, please do check out the ThemTube alternatives out there.

CLICK HERE to go to The Corbett Report’s BitChute channel

CLICK HERE to go to The Corbett Report’s DTube channel

CLICK HERE to go to The Corbett Report’s Minds.com channel

“It does look like we are moving towards a global war that could become nuclear,” warns Joseph. Are you prepared?

The regional war will slowly turn into #WW3. (Before the real sudden start of WW3 there will be peace talks. All of this has been predicted.)

Next up financial collapse & hyperinflation, then civil war in the US and Europe and then WW3 as predicted.

It has also been predicted that those who warn about this (see info down below) will be laughed at and called crazy.

– Are You Prepared For The ‘War To End All Wars?’:

All signs point toward an upcoming large-scale Israeli/U.S. attack on Lebanon and Syria and all the sycophantic mainstream media are manipulating the public as we speak to gather support for a “war to end all wars.”

The Greanville Post reported that as the media “prepares the feast” (war), what we’ll be “fed” is being revealed. Russia and Iran are the main course, with Lebanon and Syria, who will be devoured first, as the hors-d’oeuvres. As always, the media play along as if they don’t yet know what’s coming. Everyone “in the know” (global elitists) knows what is happening, just not exactly when they can pull it all together. And the media awaits this war with baited breath as they count down to the dramatic moment when they can report the incident that will compel the “innocent” to attack the “guilty.”

Anyone with half a brain can see the greatly increased anti-Russian propaganda of the past few weeks.  This has happened as the Russia-gate claims have fallen to pieces, as former CIA analyst Raymond McGovern, the late Robert Parry, Paul Craig Roberts, and others have documented so assiduously.  All across the media spectrum, from the big name corporate stenographers like The New York Times, CNN, National Public Radio, The Washington Post to The Atlantic and Nation magazines and other “leftist” publications such as Mother Jones and Who What Why, the Russia and Putin bashing has become hysterical in tone, joined as it is with an anti-Trump obsession, as if Trump were a dear friend of Putin and Russia and wasn’t closely allied with the Netanyahu government in its plans for the Middle-East. As if Trump were in charge. “Russia Sees Midterm Elections as a Chance to Sow Fresh Discord (NY Times, 2/13), “Russia Strongman” (Putin) has “pulled off one of the greatest acts of political sabotage in modern history (The Atlantic, Jan. /Feb. 2018), “”Mueller’s Latest Indictment Shows Trump Has Helped Putin Cover Up a Crime” (Mother Jones, 2/16/18), “A Russian Sightseeing Tour For Realists” (whowhatwhy.com, 2/7/18), etc.   -Greanville Post

“I’ve seen a lot of chatter in mainstream media, also in foreign policy circles about this fear of a coming war,” says Joe Joseph with The Daily Sheeple. “There’s a lot of people, especially in the upper crusts of the foreign policy think tanks, the CFR (Council on Foreign Relations) and others, that are really concerned about where things are going over in the Middle East. And then with regards to Russian and all the ‘push button’ antics going on between Russian and the United States,” he continued.

Read moreAre You Prepared For The ‘War To End All Wars?’

“If Russia is going to continue to cover for Iran then the U.S. and our partners need to take action on our own.”