“The Greatest Revolution of All Time” is predicted for the US.

All is well! Missiles launched from Iran at two military bases located in Iraq. Assessment of casualties & damages taking place now. So far, so good! We have the most powerful and well equipped military anywhere in the world, by far! I will be making a statement tomorrow morning.

Be prepared, there is a small chance that our horrendous leadership could unknowingly lead us into World War III.

Old Trump speeches say what HE will do.pic.twitter.com/9v6HShYzBd

Just putting this here for the world to see: pic.twitter.com/ZqurWn7Hcq

The road to WW3 just turned into a highway…

#BREAKING: #Iran IRGC statement:
"We warn all allied countries of the US that if attacks are launched from bases in their countries on Iran, they will be a target of military retaliation."#AlAssadBase #Iraq

Israel now on peak alert for possible Hezbollah and direct attacks from Iran in coming hours.

Iran is warning that if there is retaliation for the two waves of attacks they launched their 3rd wave will destroy Dubai and Haifa.#iran #Soleimani #war

Iran is saying that if there is no retaliation from America for these latest attacks then they will stop attacking. But if America attacks then their response will be crushing and wide spread. #iran #soleimani #war

US F-35s seen taking of from United Arab Emirates#Iran reportedly warns the #UAE will be attacked if American aircraft from there strike Iranhttps://t.co/U4kdIcMyLh pic.twitter.com/flJB1xe03q

#IRGC: "Second round of missile attack has started". More #US jets took off from Turkey incirlik base. #Israel'i and #Syrian air defence is on high alarm. #IranvsUSA #TrumpsWar pic.twitter.com/Z5aR5lsPMq

Iran Fires "Tens Of Missiles" At US Airbase In Iraq https://t.co/ErQmZIYI1h

WaPo Confirms American Base Hit By At Least 6 Rockets https://t.co/ErQmZIYI1h

The German seer Alois Irlmaier predicted the following in around 1950…

I was just watching the news, seeing how things were going over there,” said the 27-year-old. “Then I got a text message from my sergeant saying ‘don’t go anywhere.’ And that was it.”#BreakingNews #USA #Iran #WW3 #Military

Trump Threatens Major Retaliation on Iran If They ‘Do Anything’:

– Trump Threatens Major Retaliation on Iran If They ‘Do Anything’ (Bloomberg)

“Let this serve as a WARNING that if Iran strikes any Americans, or American assets, we have targeted 52 Iranian sites (representing the 52 American hostages taken by Iran many years ago), some at a very high level & important to Iran &  the Iranian culture, and those targets, and Iran itself, WILL BE HIT VERY FAST AND VERY HARD. The USA wants no more threats!“

Read more#WW3: Iran Evaluating 13 Retaliation Scenarios To Inflict “Historic Nightmare” On US: “Even if the weakest of these scenarios gain a consensus, its implementation can be a historic nightmare for the Americans.” – AND NOW: “We’re Going To War, Bro”: Elite 82nd Airborne In Largest ‘Fast Deployment’ In A Decade – Before: Trump Threatens Major Retaliation on Iran If They ‘Do Anything’ – “No More Threats”: Trump Warns Iran “52 Targets Will Be Hit Very Fast & Hard”

It’s TPTB who are destabilizing the U.S. and are about to cause a total collapse of the financial system and society as we know it.

The government is just following orders.

Trump, Obama, the Bushs, the Clintons, etc. are all elite puppets.

The “Greatest Revolution of All Time” and all-out civil war is predicted for the U.S. 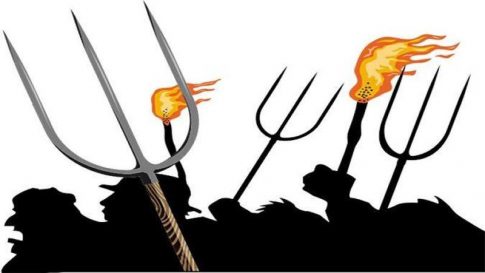 – American Apocalypse: The Government’s Plot To Destabilize The Nation Is Working:

Authored by John Whitehead via The Rutherford Institute,

“The most dangerous man to any government is the man who is able to think things out … without regard to the prevailing superstitions and taboos. Almost inevitably he comes to the conclusion that the government he lives under is dishonest, insane, intolerable.” – H. L. Mencken

The U.S. government is working hard to destabilize the nation.

No, this is not another conspiracy theory.

Although it is certainly not far-fetched to suggest that the government might be engaged in nefarious activities that run counter to the best interests of the American people, doing so will likely brand me a domestic terrorist under the FBI’s new classification system.

Observe for yourself what is happening right before our eyes.

Domestic terrorism fueled by government entrapment schemes. Civil unrest stoked to dangerous levels by polarizing political rhetoric. A growing intolerance for dissent that challenges the government’s power grabs. Police brutality tacitly encouraged by the executive branch, conveniently overlooked by the legislatures, and granted qualified immunity by the courts. A weakening economy exacerbated by government schemes that favor none but a select few. An overt embrace of domestic surveillance tactics if Congress goes along with the Trump Administration’s request to permanently re-authorize the NSA’s de-activated call records program. Heightened foreign tensions and blowback due to the military industrial complex’s profit-driven quest to police and occupy the globe.

The seeds of chaos are being sown, and it’s the U.S. government that will reap the harvest.

Better yet, take a look at “Megacities: Urban Future, the Emerging Complexity,” a Pentagon training video created by the Army for U.S. Special Operations Command.

The training video is only five minutes long, but it says a lot about the government’s mindset, the way its views the citizenry, and the so-called “problems” that the government must be prepared to address in the near future through the use of martial law.

Even more troubling, however, is what this military video doesn’t say about the Constitution, about the rights of the citizenry, and about the dangers of locking down the nation and using the military to address political and social problems.

The training video anticipates that all hell will break loose by 2030—that’s barely ten short years away—but the future is here ahead of schedule.

We’re already witnessing a breakdown of society on virtually every front.

Read moreAmerican Apocalypse: The TPTB’s Plot To Destabilize The Nation Is Working