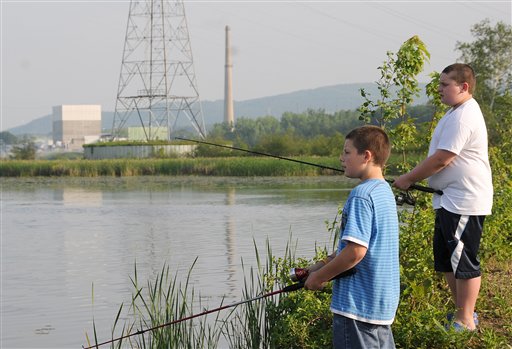 In this May 29, 2010 photo, Shawn Cole, 12, of Hinsdale, N.H., left, and Peter Rosploch, 11, of Winchester, N.H. fish in the Connecticut River across from the Vermont Yankee nuclear power plant. When a fish taken from the Connecticut River recently tested positive for radioactive strontium-90, suspicion focused on the nearby Vermont Yankee nuclear plant as the likely source. Operators of the troubled 38-year-old nuclear plant on the banks of the river, where work is under way to clean up leaking radioactive tritium, revealed this month that it also found soil contaminated with strontium-90, an isotope linked to bone cancer and leukemia. (AP Photo)

MONTPELIER, Vt. — When a fish taken from the Connecticut River recently tested positive for radioactive strontium-90, suspicion focused on the nearby Vermont Yankee nuclear plant as the likely source.

Operators of the troubled 38-year-old nuclear plant on the banks of the river, where work is under way to clean up leaking radioactive tritium, revealed this month that it also found soil contaminated with strontium-90, an isotope linked to bone cancer and leukemia.

Three days later, officials said a fish caught four miles upstream from the reactor in February had tested positive for strontium-90 in its bones. State officials say they don’t believe the contamination came from Vermont Yankee.

Tritium was reported leaking from the plant in January, and since then has turned up in monitoring wells at levels 100 times the federal Environmental Protection Agency’s safety limit for that substance in drinking water. Other radioactive isotopes have been found as well, including cesium-137, zinc-65 and cobalt-60.

The moves come after 10 pro-Palestinian activists on an aid flotilla were reported killed and dozens wounded by Israeli forces.

Deputy Prime Minister Bulent Arinc says Turkey is withdrawing its ambassador on Monday and also calling back a youth soccer team from Israel. He equates Israel’s actions with “piracy.” 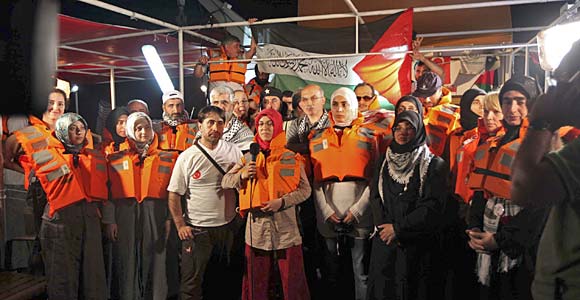 And the ECB buying up Greek bonds is pure quantitative easing (=printing money=inflation=tax on monetary assets), which will not stabilize, but devalue the euro.

In this case things are a little more complicated because the credit line for the ECB quantitative easing policy comes directly from the US Federal Reserve.

The European Central Bank has been buying up Greek bonds by the bucketload, even though Athens is already getting money from an EU rescue fund. German central bankers suspect a French plot behind the massive buy-up — after all, it gives French banks the perfect opportunity to get rid of their Greek assets.

The senior members of the German central bank, the Bundesbank, regarded Axel Weber with a look of anticipation. What would Weber, the Bundesbank president, say about the serious crisis that had them all so worried, they wondered? And what did he intend to do about it?

Weber said nothing and, as some who attended the meeting report, even his facial expression was inscrutable. The Bundesbank president remained stone-faced as he acknowledged the latest figures, which indicated that by the end of last week the European Central Bank (ECB) had already spent close to €40 billion ($50 billion) on buying up government bonds from Spain, Portugal, Ireland and, in particular, Greece.

The ECB already has about €25 billion of Greece’s mountain of debt on its books, and it is adding another €2 billion a day, on average. The Bundesbank, which has a 27 percent stake in the ECB, is responsible for €7 billion of the ECB’s Greek government bonds.

Many Bundesbank members are wondering why the ECB is buying Greek bonds in the first place, particularly on this scale, now that the euro-zone countries’ €110 billion bailout package for Greece has been approved, and the first tranche of the funds has already been disbursed.

The general €750 billion rescue fund for the remaining highly indebted countries has been approved but not yet set up. For this reason, it certainly makes sense to stabilize the prices of Spanish, Portuguese and Irish bonds. Nevertheless, some of the central bankers have a sneaking suspicion that there is a French conspiracy at work.

“I will promise you this, that if we have not gotten our troops out by the time I am President, it is the first thing I will do. I will get our troops home. We will bring an end to this war. You can take that to the bank. “
– Barack Obama Campaign Promise – October 27, 2007

Berlin’s budget problems are less severe but Finance Minister Wolfgang Schaeuble signaled at the weekend that Germans may have to stomach tax rises as well as spending cuts.

French European parliament member Daniel Cohn-Bendit was even blunter, accusing the leaders of France and Germany of obliging Greece to maintain arms sales negotiations with their countries before agreeing to financial aid.

“For the past three months, there were several billions in arms contracts that we forced Greece to confirm: French frigates … helicopters, airplanes, German submarines. It’s hypocrisy,” Cohn-Bendit said at a news conference in Paris earlier this month.

“We want to make money … on the backs of the Greeks,” he said.

Both the French and German governments flatly denied the allegations.

THE Greek government has been advised by British economists to leave the euro and default on its €300 billion (£255 billion) debt to save its economy.

The Centre for Economics and Business Research (CEBR), a London-based consultancy, has warned Greek ministers they will be unable to escape their debt trap without devaluing their own currency to boost exports. The only way this can happen is if Greece returns to its own currency.

Greek politicians have played down the prospect of abandoning the euro, which could lead to the break-up of the single currency.

Speaking from Athens yesterday, Doug McWilliams, chief executive of the CEBR, said: “Leaving the euro would mean the new currency will fall by a minimum of 15%. But as the national debt is valued in euros, this would raise the debt from its current level of 120% of GDP to 140% overnight.

“So part of the package of leaving the euro must be to convert the debt into the new domestic currency unilaterally.”

Greece’s departure from the euro would prove disastrous for German and French banks, to which it owes billions of euros.