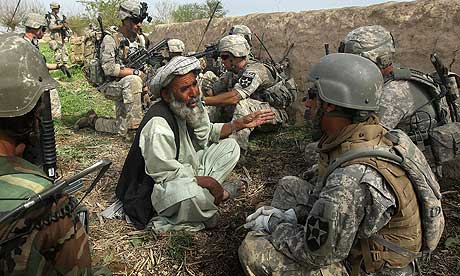 It is the common belief among Afghans that the west has no intention of ending the conflict in Afghanistan. Photograph: John Moore/Getty Images

It’s near-impossible to find anyone in Afghanistan who doesn’t believe the US are funding the Taliban: and it’s the highly educated Afghan professionals, those employed by ISAF, USAID, international media organisations – and even advising US diplomats – who seem the most convinced.

One Afghan friend, who speaks flawless English and likes to quote Charles Dickens, Bertolt Brecht and Anton Chekhov, says the reason is clear. “The US has an interest in prolonging the conflict so as to stay in Afghanistan for the long term.”

The continuing violence between coalition forces and the Taliban is simple proof in itself.

“We say in this country, you need two hands to clap,” he says, slapping his hands together in demonstration. “One side can’t do it on its own.”

His arguments are reasoned, although he slightly ruins the effect by explaining to me that no Jews died in the Twin Towers. It’s not just the natural assets of Afghanistan but its strategic position, the logic goes. Commanding this country would give the US power over India, Russia, Pakistan and China, not to mention all the central Asian states.

“The US uses Israel to threaten the Arab states, and they want to make Afghanistan into the same thing,” he says. “Whoever controls Asia in the future, controls the world.”

“Even a child of five knows this,” one Kabuli radio journalist tells me, holding his hand a couple of feet from the ground in illustration. Look at Helmand, he says; how could 15,000 international and Afghan troops fail to crush a couple of thousand of badly equipped Taliban?

And as for the British, apparently they want to stay in Afghanistan even more than the Americans. The reason they want to talk to the Taliban is to bring them into the government, thus consolidating UK influence.

This isn’t just some vague prejudice or the wildly conspiratorial theories so prevalent in the Middle East. There is a highly structured if convoluted analysis behind this. If the US really wanted to defeat the Taliban, person after person asks me, why don’t they tackle them in Pakistan? The reason is simple, one friend tells me. “As long as you don’t get rid of the nest, the problem will continue. If they eliminate the Taliban, the US will have no reason to stay here.”

The proof is manifold, they say (although it does tend to include the phrase guaranteed to dismay every journalist: “everybody knows that …”).

Among the things everybody knows are that Afghan national army troops report taking over Taliban bases to find identical rations and weapons to their own US-supplied equipment. The US funds the madrasas both in Afghanistan and in Pakistan, which produce the young Talibs. US army helicopters regularly deliver supplies behind Taliban lines. The aid organisations are nothing more than intelligence-collecting agencies, going into regions the army cannot easily reach to obtain facts on the ground. Even the humblest midwife-training project is a spying outfit.

One political scientist, who works as an advisor to US agencies in the north of the country, recounts how people fear the continuing influence of the warlords, illustrating his point with descriptions of violence and corruption that extends into the realms of banking, government and trade.

Afghans hate these warlords, he says, but the US wants them kept in place. “If they were removed, and competent and clean people brought in, we would bring in revenues of our own. We could have our own economy, and demand foreign investment with transparency. We would have a true army, to protect us and serve Afghanistan.”

So why do these well-educated Afghan professionals work for governments they are convinced want to sink their claws into their country?

There’s nothing contrived about their patriotism – with their skills they could easily study or work abroad, but choose to stay to build a better future for their country. Afghans have a historical suspicion towards any foreign power involved in their country and maybe with the resilience of a nation which has seen off one occupier after another, they are willing to wait it out, confident the will of the US will break before their own.

They don’t want Nato to leave for 15, maybe 20 years, anyway. It will take that long for Afghan institutions to be able to survive independently. In the meantime, as my literature-loving friend – who works for a number of US agencies – tells me, there is no contradiction in survival. “I like Benjamin Franklin in my pocket,” he smiles. So much for hearts and minds.

– Taliban get £1,600 bounty for each Nato soldier killed