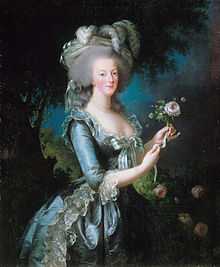 By 1789, a lot of French people were starving. Their economy had long since deteriorated into a weak, pitiful shell. Decades of unsustainable spending had left the French treasury depleted. The currency was being rapidly debased. Food was scarce, and expensive.

Perhaps most famously, though, the French monarchy was dangerously out of touch with reality, historically enshrined with the quip, “Let them eat cake.”

The Bourbon monarchy paid the price for it, eventually losing their heads in a 1793 execution.  But it took the French economy decades to finally recover.

Along the way, the government tried an experiment: issuing a form of paper money. It didn’t matter to the French politicians that every previous experiment with paper money in history had been an absolute disaster.

As French Assemblyman M. Matrineau put it in 1790, “Paper money under a despotism is dangerous. It favors corruption. But in a nation constitutionally governed, which itself takes care in the emission of its notes [and] determines their number and use, that danger no longer exists.”

Read moreTrust Me, This Time Is Different …

Addressing a question yesterday, from Senator Bob Corker, on his “being the biggest dove since World War II” and the “degrading effects that he’s having on society,” Bernanke responded proudly that be believed his “inflation record is the best of any Federal Reserve Chairman in the post-war period.” Of course that is by his measure. We suggest, he and few of his transitory colleagues look at the chart below for a sense of just what his ‘dovishness’ looks like to the rest of the food- and energy-consuming world… or perhaps by ‘best’ he means ‘most’.

CORKER: So I think that, you know, I don’t think there’s any question that you would be the biggest dove, if you will, since World War II. I think it’s something you’re rather proud of…. Just wondering if you — if ya’ll talk at all in your meetings about the degrading effect that’s having on our society.

BERNANKE: You called me a dove. Well, maybe in some respects I am, but on the other hand, my inflation record is the best of any Federal Reserve Chairman in the post-war period, or at least one of the best, about two percent average inflation. 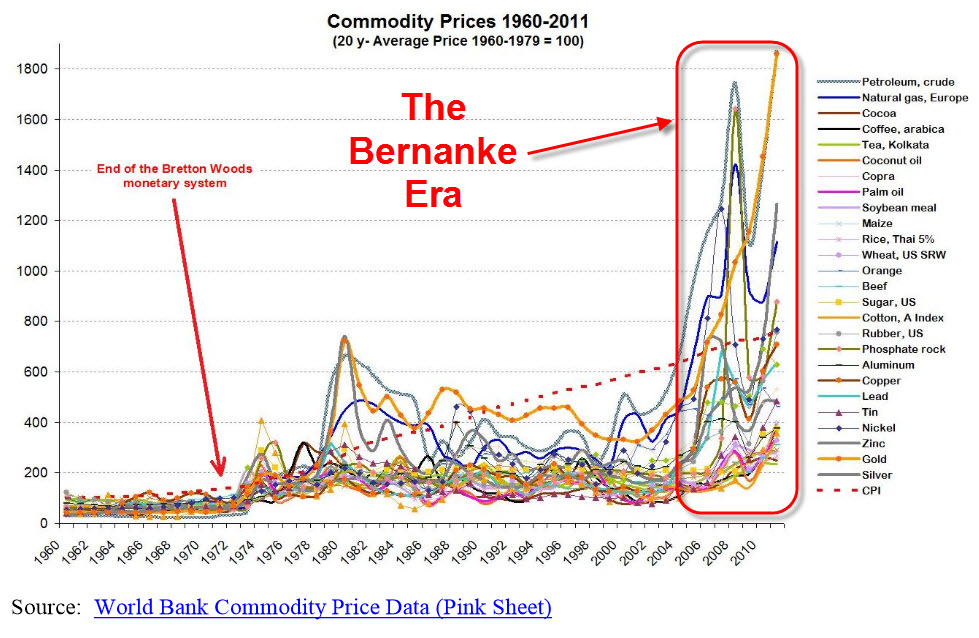 Following on the heels of Merkel’s adviser Lars Feld’s comments, German finance minister Schaeuble has raised concerns over the results of the Italian elections. His comment that,“I never said the euro crisis was over,” stands in contrast to the claims of Monti, Draghi, Lagarde, Barroso, and Sarkozy who all have. along with the market’s “doubts that a stable government can be formed,” raises the risk of turmoil spreading to other euro countries. Schaeuble commented further that, “now it is up to those who were elected in Italy on Sunday to form a stable government. The faster they do this, the quicker the uncertainty will be overcome.” The problem, as Reuters reports, appears to be not just Italy’s public dissension over Germany’s demands for austerity but his French counterpart’s comments that “austerity has gone far enough,” to which the German rebuked, “France must also do more here, Hollande knows this and so does Pierre Moscovici.” Tension is certainly rising in the depression-addled union, even as Draghi explains – it’s all ok, he promises.

Read moreGerman Finance Minister Warns: ‘I Never Said The Euro Crisis Was Over’

For all the groundless, starry-eyed optimism permeating Europe’s bureaucratic corridors of the fading oligarchy these days (because this time is not like every other time that, too, was different), there has always existed one sure, never-fail antidote: Germany, which without fail has managed to ground Europe any time its delusion of grandure hit escape velocity. Sure enough, while all the statist soothsayers who threatened with armageddon if the outcome of the Italian elections happened to be precisely the one that transpired, were stuck in backpedal mode, and scrambling to calm nerves that all shall be well after all, one person who refuses to play by the script is Lars Feld, member of panel of economic advisers to German Chancellor Angela Merkel, who in an interview with the Frankfurter Allgemeine Zeitung tomorrow says the euro crisis is to return shortly and “with a vengeance” as capital loss will lead to higher risk premiums for Italy’s interest rates.

The Italian economy would not find their way out of the recession, according to the pessimistic assessment by Lars Feld: “The sustainability of Italian public finances is in jeopardy. The euro crisis will therefore return shortly with a vengeance.”

Read moreMerkel’s Economic Advisor: ‘Euro Crisis Will Return Shortly And With A Vengeance’

– Targeted Killings: ‘It’s Ok If Obama Does It’

This letter is a few days old, but is very important for every American to be aware of. Essentially, Rand Paul is threatening to filibuster Barack Obama’s nominee for the CIA, John Brennan, due to his refusal to answer a simple question:

Do you believe that the President has the power to authorize lethal force, such as a drone strike, against a U.S. citizen on U.S. soil, and without trial?

This should not be a complicated question to answer, yet it seems Obama, Brennan and pretty much every other little power consumed bureaucrat is incapable of doing so.  Below is Rand Paul’s letter reprinted in full (my emphasis added).

Read moreSenator Rand Paul’s Third Letter To The CIA: Can You Kill With Drones In The USA?

Government is actually the worst failure of civilized man. There has never been a really good one, and even those that are most tolerable are arbitrary, cruel, grasping and unintelligent.

As democracy is perfected, the office represents, more and more closely, the inner soul of the people. We move toward a lofty ideal. On some great and glorious day the plain folks of the land will reach their hearts desire at last, and the White House will be adorned by a downright moron.

But this is not about Mr. Mencken. Rather it is about some unknown individual who committed the following to the email world: 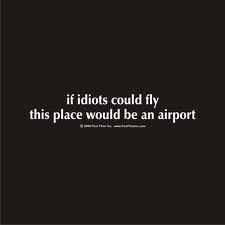 OKLAHOMA CITY – A significant winter storm has brought as much as 22 inches of snow to parts of Oklahoma on Monday, according to the News 9 Weather Team.At the request of Gov. Mary Fallin, Monday afternoon, Lt. Governor Todd Lamb declared a State of Emergency for 56 Oklahoma counties due to the excessive snow and severe weather. The executive order allows state agencies to make emergency purchases related to disaster relief and preparedness. It is also a first step toward seeking federal assistance, if it’s needed.

The area just west of Alva, Oklahoma, received 22 inches of snow during the storm.

Read moreWinter Storm Dumps As Much As 22 Inches Of Snow In Oklahoma, State Of Emergency Declared 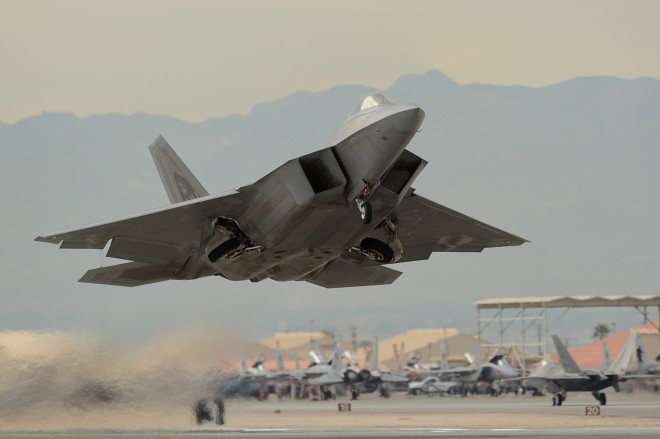 An F-22 takes off on a training flight last month. Photo: Air Force

The Air Force has some bad news for the pilots of its F-22 Raptor stealth fighters: Your planes are going to make you feel crappy and there’s not much anyone can do about it. And the message to the maintainers of the radar-evading jet is even more depressing. Any illness they feel from working around the Raptor is apparently all in their heads, according to the Air Force.

Those admissions, buried in newly released Congressional records, represent the latest twist in the years-long saga of the F-22′s faulty oxygen system, which since at least 2008 has been choking pilots, leading to confusion, memory loss and blackouts — combined known as hypoxia — that may have contributed to at least one fatal crash. Ground crews have also reported growing sick while working around F-22s whose engines are running.

The Air Force claims its has a handle on the in-flight blackouts. All 180 or so F-22s are having faulty filters removed and new backup oxygen generators installed. There have also been changes to the G-suits pilots wear. But the Air Force says the alterations won’t do anything to fix the so-called “Raptor cough,” a chronic condition afflicting almost all F-22 pilots.

Three priests and a former priest in Scotland have reported the most senior Catholic clergyman in Britain, Cardinal Keith O’Brien, to the Vatican over allegations of inappropriate behaviour stretching back 30 years.The four, from the diocese of St Andrews and Edinburgh, have complained to nuncio Antonio Mennini, the Vatican’s ambassador to Britain, and demanded O’Brien’s immediate resignation. A spokesman for the cardinal said that the claims were contested.

O’Brien, who is due to retire next month, has been an outspoken opponent of gay rights, condemning homosexuality as immoral, opposing gay adoption, and most recently arguing that same-sex marriages would be “harmful to the physical, mental and spiritual well-being of those involved”. Last year he was named “bigot of the year” by the gay rights charity Stonewall.