Congress wouldn’t allow Medicare to pay for benzodiazepines such as Xanax and Ativan until 2013. Now, the medications are among the most prescribed in its drug program.

This story was co-published with the Boston Globe, the Miami Herald and Health News Florida.

In 2012, Medicare’s massive prescription drug program didn’t spend a penny on popular tranquilizers such as Valium, Xanax and Ativan.

The following year, it doled out more than $377 million for the drugs.

“Whatever happened to the HIPPOCRATIC OATH?
Was there a typo when Obamacare came in & it is now the HYPOCRITIC OATH?” 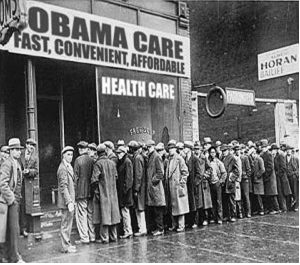 As we’ve warned for months, just because Americans are required to have health insurance coverage under regulations contained in the Affordable Care Act, that doesn’t mean that they will have access to care.

If you recall, the entire purpose behind Obamacare, according to the president and the law’s backers, was only to insure something like 14 or 15 million people, because at the time the measure was being debated, the vast majority of Americans — well over 80 percent — had health insurance. What’s more, the bulk of those insured had private sector plans, and most were insured through employers; the number of Americans on taxpayer-subsidized coverage, like Medicaid, was minimal.

The narrative that Social Security, Medicare and pension funds invested in stocks and bonds can fund the retirement of 65 million people is a misleading fantasy. The sad reality is we can’t fund the enormous expense of retirement/healthcare for 20% of the populace out of our national earned income, and the savings that have been set aside are either fictitious (the Social Security Trust Fund) or based on phantom wealth created by speculative asset bubbles in stocks, bonds and real estate.

“We paid our Social Security and Medicare taxes; we earned our benefits.” It is that belief among senior citizens that President Obama was pandering to when, in his second inaugural address, he claimed that those programs “strengthen us. They do not make us a nation of takers.”

If Social Security and Medicare both involved people voluntarily financing their own benefits, an argument could be made for seniors’ “earned benefits” view. But they have not. They have redistributed tens of trillions of dollars of wealth to themselves from those younger.

Social Security and Medicare have transferred those trillions because they have been partial Ponzi schemes.

Read moreKilling The ‘We Paid Our Taxes; We Earned Our Benefits’ Social Security Ponzi Meme

Abby Martin calls out the corporate media for its incessant superficial coverage of the Obamacare website, all the while ignoring both the successes and the truly legitimate criticisms of the Affordable Care Act.

The primary tool of socialism is force, and while that force usually begins with good intentions codified into law, it inevitably ends up with the kind of force used by Mao Zedong to murder millions of his own citizens. “Political power grows out of the barrel of a gun,” he famously stated, and Obama-supporting democrats are following in his footsteps.

Word from the street is that Kathleen Murphy, a democrat running for the House, wants to make it a legal requirement that doctors accept Medicare and Obamacare patients.

Many doctors, of course, have already announced that will not accept such patients because they would go bankrupt if they did. The government’s payout on medical services rendered to patients in these groups is a total joke, you see: doctors sometimes receive only 30% of what they actually billed. And they can’t negotiate, either. The government simply tells you what you “get” to receive in terms of payment, regardless of how much you actually billed as a doctor.

So forcing doctors to accept Medicare / Obamacare patients is the same as forcing them to work for free. Most doctors won’t work for free, as they have their own families to financially support, so they’ll simply quit the industry altogether. That, in turn, will cause a radical worsening of the existing doctor shortage across the USA, resulting in yet more people going without health care.

The number of Americans receiving money directly from the federal government has grown from 94 million in the year 2000 to over 128 million today.  A shocking new research paper by Patrick Tyrrell and William W. Beach contains that statistic and a whole bunch of other very revealing numbers.  According to their research, the federal government hands out money to 41.3 percent of the entire population of the United States each month.  Overall, more than 70 percent of all federal spending goes to what they call “dependence-creating programs”.  It is the most massive wealth redistribution scheme in the history of the world, and it continues to grow at a very rapid pace with each passing month.  But can we really afford this?  Of course we never want to see a single person go without food to eat or a roof to sleep under, but can the federal government really afford to support 128 million Americans every month?  If millions more Americans keep jumping on to the “safety net” each year, how long will it be before it breaks and it is not there for anyone?  The federal government is already drowning in debt.  This year the U.S. national debt will easily blow past the 17 trillion dollar mark and we are rapidly heading toward financial oblivion.  We are stealing more than 100 million dollars from our children and our grandchildren every single hour of every single day with no end in sight.  If we don’t get our finances in order as a nation, what will the end result be?

From the WSJ article:

But wait it gets worse:

And again, prepare for total collapse.

Hiding the government’s liabilities from the public makes it seem that we can tax our way out of mounting deficits. We can’t.

A decade and a half ago, both of us served on President Clinton’s Bipartisan Commission on Entitlement and Tax Reform, the forerunner to President Obama’s recent National Commission on Fiscal Responsibility and Reform. In 1994 we predicted that, unless something was done to control runaway entitlement spending, Medicare and Social Security would eventually go bankrupt or confront severe benefit cuts.

Eighteen years later, nothing has been done. Why? The usual reason is that entitlement reform is the third rail of American politics. That explanation presupposes voter demand for entitlements at any cost, even if it means bankrupting the nation.

A better explanation is that the full extent of the problem has remained hidden from policy makers and the public because of less than transparent government financial statements. How else could responsible officials claim that Medicare and Social Security have the resources they need to fulfill their commitments for years to come?