Well well well…. ( The origins of the next crisis – William White, the former chief economist at the Bank of International Settlements (BIS) gave an important speech at George Soros’ Inaugural Institute of New Economic Thinking (INET) conference in Cambridge.):

In essence, White was saying: “it’s the debt, stupid.”  When aggregate debt levels build up across business cycles, economists focused on managing within business cycles miss the key ingredient that leads to systemic crisis. It should be expected that politicians or private sector participants worried about the day-to-day exhibit short-termism. But White says it is particularly troubling that economists and their models exhibit the same tendency because it means there is no long-term oriented systemic counterweight guiding the economy.

This short-termism that White refers to is what I call the asset-based economic model. And, quite frankly, it works – especially when interest rates are declining as they have over the past quarter century. The problem, however, is that you reach a critical state when the accumulation of debt and the misallocation of resources is so large that the same old policies just don’t work anymore. And that’s when the next crisis occurs.

It seems that Mr. Harrison has it figured out.  He goes on to spend a lot of digital ink on the periphery of the bottom line, which is that we continue to think of debt in terms of service costs (indeed, you’ll hear Bernanke talk about it, but never about the actual gross financial system debt outstanding.)

When you boil all this down, however, you get to the following chart (trendline added by moi): 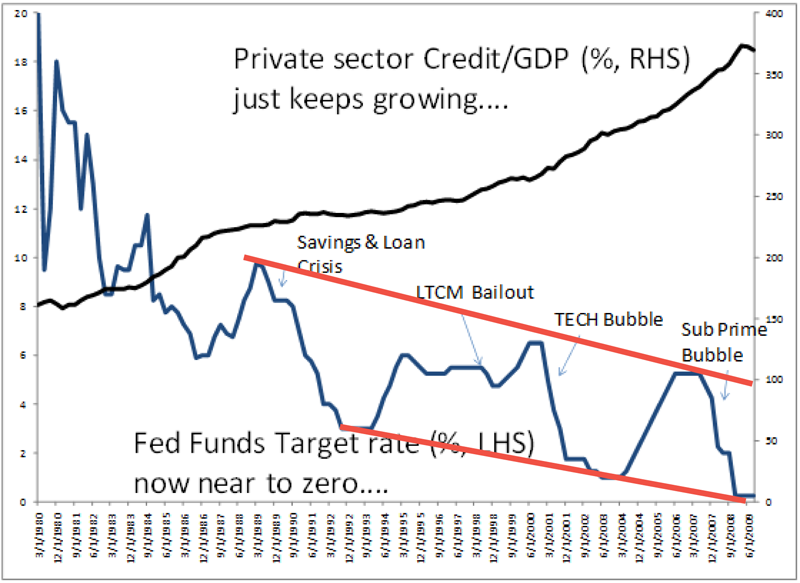 You can see what’s going on here – each “crisis” leads to lower lows and lower highs.

This is where the ultimate failure in policy arrives, and it leads to at best a Japan-style scenario where the economy fails to come out of recession or, at worst, monetary and political system failure.

We had a bubble at the S&L crisis, ultimately culminating in the Tech Wreck, because we refused to force the bad debt to clear.  This was obvious even in the 1990s, but nobody wanted to hear it.  The few businesses that ran without leverage did ok, but those who ran lots of leverage had spectacular success – right up until they detonated, and most of them did.

The 2000s were marked by even more leverage.  Why?  Because it was the only way to get return left.  The Government, having stepped in to support the economy with $500+ billion annually in deficit spending, was unable to pull back without instantaneously crashing the economy: 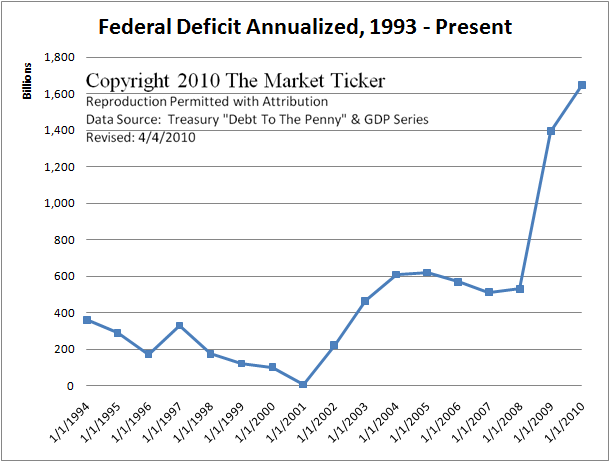 They thought they were smart.

In point of fact, they were criminally insane, and proof of it is found in what we’re doing now.

We now have both driven the low end of the rate curve to zero and taken on more than $3 trillion in new Federal debt.  To put this in perspective the total outstanding accumulated Federal Debt at the end of 1992 – from the founding of the US to January 1st of 1993 – was just $4.2 trillion.

We added more Federal debt than had been accumulated in 217 years in just a little over THREE years – from 2007 to the third month 2010.

The ugly is that this debt load (currently $12.8 trillion, more or less) presents interest expense.  If the Fed Funds Target was to reach just five percent, and every bit of the Treasury debt was to be refinanced into overnight obligations at that same 5%, the interest expense alone of the current debt would be $640 billion a year.

If the Treasury was to have to pay a roughly 6% average coupon (reasonably aggressive with a 5% Fed Funds Target) the interest expense would be $768 billion annually.

To put this in perspective that is an amount roughly equivalent to that spent on defense, and is higher than Social Security, Medicare, or all other “mandatory” program spending combined.

It would consume nearly all of Social Security and Medicare tax receipts ($891 billion) or the personal income tax ($915 billion)  (ed. All 2009 federal budget numbers)

It is also four times what we spent last year on interest.

There is not a snowball’s chance in Hades that the Federal Government can afford that.

This will inexorably lead to political pressure to hold down rates, which will in turn lead to more malinvestment – and bubbles.  Like, for instance, an 80% increase in stock prices in one year, or more than a doubling in the price of oil over the same time.

It will also lead to silly things like allowing banks to hold “assets” at dramatically above their true value in order to keep them from having to hold sufficient capital against real losses, in a futile attempt to keep them from going boom.

But you can’t fix debt intoxication with another bottle of whiskey.

What we’re doing now will inevitably lead to another crisis, this one much worse than the last.  Burdened with the bad paper they refused to unload, the banks will get into cash flow trouble as their attempt to extract ever-larger amounts of money from everyone else in society to paper over their own insolvency will ultimately fail.

The Federal Government will see the market back up rates irrespective of what they try to do, just as Greece has.  This will force borrowing costs higher, and ultimately make destruction of the “mandatory” on-budget programs necessary.

What comes with that is anyone’s guess – in particular, whether civil order survives in a world where half of Medicare and Social Security are gone, all other “mandatory” programs are erased, and taxes are running at roughly double the rates we have today.

Timing?  Best case, a few years.  Worst case, anything could set it off.  Defaults in other nations, a loss of confidence in The Fed or Government, war.

But what’s not in question is the outcome if we do not change course.  If we do not take serious, even radical steps.  If we do not stop the deficit spending, accounting fraud, bailouts and punitive view of the tax system toward capital formation.

All of those things must happen, and happen soon, but there is no political will to do any of them.  The banks have the government in their pocket – witness the statements made in the WaMu hearings Tuesday, when a literal 500-page tome of reference documents on the witness table laid forth one of the most-voluminous list of alleged felonies I have ever seen in a Congressional Hearing.  Or Kanjorski’s joke of a hearing last year in which FASB effectively had a gun shoved up their nose and was told to legalize balance-sheet fraud.  Or Paulson and Bernanke’s “dead of night tanks in the street” game of fear run on Congress in 2008 – after they created the conditions for that fear by willfully and intentionally ignoring the fact that Lehman had been insolvent literally for months.

No folks, we’re not going to get out of this cleanly.  Enjoy trading the market which ever way it goes.  The “pumpfest” is on full-bore now, with CNBC and everyone else crooning about how “retail” (that’s you!) has missed it and needs to “get in the game.”

They don’t ring a bell at the top, but they sure do herd the sheep into the pen to be shorn, and you can bet that those who placed bets against Armageddon last time need someone – you – to sell to.

Maybe you’re fast enough, maybe you’re not.  But just as the last time around, when the banksters knew for three months that Lehman was bankrupt before you did (and you can bet they placed their chips on the table!), you won’t be told in advance before the floor disappears – but they both will be told and they’ll be the ones to pull the pin.

It isn’t different this time folks, and the math is never, ever wrong.