– A Tale Of Two Inflations: Why US CPI Is Flawed And Why Bernanke Will Maintain ZIRP As Revolutions Rage (ZeroHedge)

– Ron Paul To Ben Bernanke: “People Lose Trust In The Government Because You Lie To Them About Inflation”(ZeroHedge, Feb. 29, 2012):

Anytime Ron Paul sits across from Ben Bernanke you know sparks will fly. Sure enough, they did: starting 3 mins 50 seconds into the clip below, Ron Paul, guns blazing, asks the Chairman if he does his own shopping, if he is aware of what true inflation is, and if he knows that Americans don’t trust the government because they are being lied to about inflation. And it only gets better, once Paul starts brandishing a silver coin. The punchline: “The Fed will self-destruct anyway when the money is gone” – amen. And ironically letting the Fed keep on doing what it is doing will achieve that in the fastest possible way. In fact, letting the system cannibalize itself with no further hindrances may be the best option currently available – just go to town.

This will be one of those “one picture is worth a thousand words” posts.

During Congressional testimony, Ben Bernanke defended the Fed’s FX swap lines by saying that the ECB was “well-capitalized.” So instead of spending countless words explaining why that may not be quite so, we will merely show the bank’s total assets (net of LTRO 2) and its capital and reserves (link). The adjusted balance sheet is pro forma for today’s LTRO 2, which we noted earlier will add at least €311 billion in net assets to the ECB’s balance sheet, and potentially much more. Assuming the minimum, it means the ECB’s balance sheet will now hit €3 trillion. The capital backing these assets is €82 billion across the entire Eurosystem. In other words, the ECB’s leverage is 36.6x. This according to Ben Bernanke is “well-capitalized.” 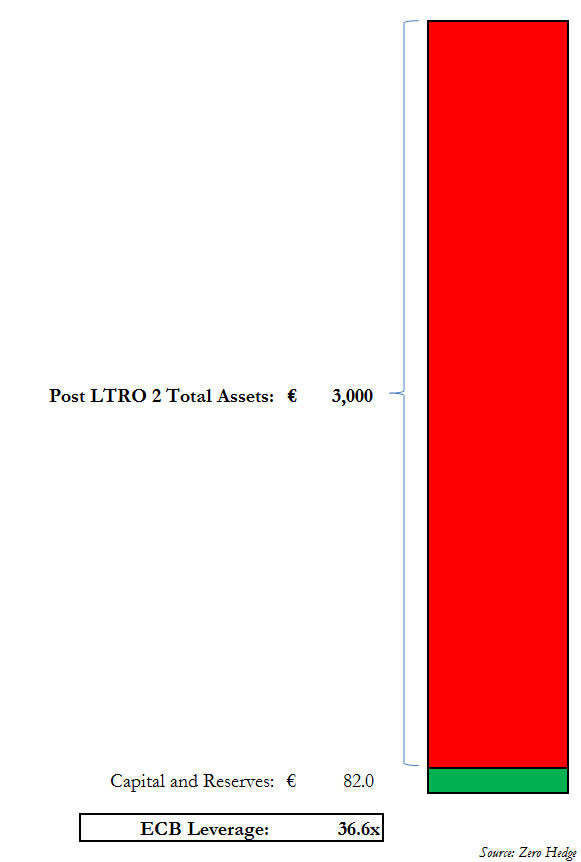 Ireland has shocked Europe with plans for a referendum on the EU’s fiscal treaty, a move that risks an unprecedented fragmentation of the eurozone and a major clash with Germany.

Premier Enda Kenny said Dublin was acting on legal advice from Ireland’s attorney-general that “on balance” the fiscal compact requires a vote under the country’s constitution. “It gives the Irish people the opportunity to reaffirm Ireland’s commitment to membership of the euro,” he told ashen-faced members of the Dail.

All three major parties back the treaty but analysts say there is a high risk of rejection by angry voters in the current fractious mood. The compact gives the EU intrusive powers to police the budgets of debtor states, and has been denounced as feudal bondage by Sinn Fein and Ireland’s vociferous eurosceptics. The Irish voted “No” to both the Nice and Lisbon treaties before being made to vote again. Dublin has ruled out a second vote this time.

An archived clip of different Congressional hearings exposes the fact that the CIA directly plants stories in the media, both in the United States and the rest of the world.

Question: Do you have any people being paid by the CIA who are contributing to a major circulation journal?

Answer: We do have people who submit pieces to American journals.

Question: Do you have any people paid by the CIA who are working for television networks?

Answer: This I think gets into the details id like to get into in executive session. (so the public doesn’t hear how we control all the networks)

Considering that this was going on in the 1950s, it is highly likely that this is happening now and at a much larger extent. The CIA and other government agencies literally control the corporate controlled media.

Anytime you hear a story on the major networks that has any implication in US foreign or domestic policy rest assured that it was, at the very least, vetted by the CIA before being released.

In the early 90s CNN was also used to test Army psychological operations.

“The CIA owns everyone of any significance in the major media.”
– William Colby, former CIA director

“We’ll know our disinformation program is complete when everything the American public believes is false.”
– William Casey, CIA Director (from first staff meeting, 1981)

“Deception is a state of mind and the mind of the State.”
– James Angleton, head of CIA counter intelligence from 1954-1974

“I never would have agreed to the formulation of the Central Intelligence Agency back in forty-seven, if I had known it would become the American Gestapo.”
– Harry S. Truman

“The individual is handicapped by coming face-to-face with a conspiracy so monstrous he cannot believe it exists.”
– J. Edgar Hoover, ex-FBI director on the New World Order conspiracy

“If the American people knew what we have done, they would string us up from the lamp posts.”
– George H. W. Bush

” I will splinter the CIA into a thousand pieces and scatter it into the winds.”
– John F. Kennedy

“Fifty men have run America, and that’s a high figure.”
– Joseph Kennedy, father of JFK, in the July 26th, l936 issue of The New York Times 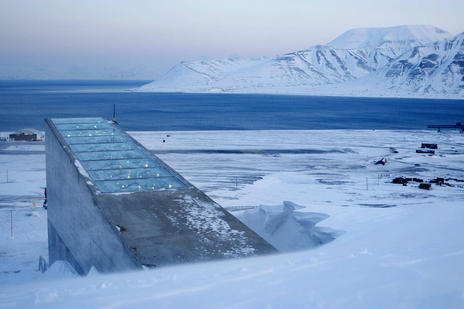 – Ministry of Agriculture to Allow Rice to Be Grown in Almost All Areas in Fukushima This Year, Just Like Last Year (EX-SKF, Feb. 28, 2012):

except for a few districts where rice with high level of radioactive cesium exceeding 500 becquerels/kg was found in last year’s testing.

Well why not? The government didn’t stop farmers in Fukushima from planting rice last year, right after three explosions (possibly 4, counting Reactor 2’s Suppression Chamber) at Fukushima I Nuclear Power Plant released 650,000 terabecquerels (iodine equivalent) of radioactive materials. They apparently told some reluctant farmers if they didn’t grow rice they wouldn’t be compensated. So the farmers in Fukushima tilled the land, mixed up the contaminated soil and poured water in the rice paddies and grew rice. If they could do it last year, surely they can do it this year, and next year, and year after next year.

– Independent Investigation Commission on Fukushima Accident: Confusion from Interference by PM Kan and His Ministers Made the Situation Much Worse (EX-SKF, Feb. 27, 2012)

Here’s AP’s Japanese reporter’s take on the report by the private independent investigation commission set up by the Rebuild Japan Initiative Foundation (RJIF).

One of the issues that AP focuses in the article below is whether TEPCO did want to abandon the plant on March 15. The private RJIF commission sides with the Kan administration that TEPCO did, and only PM Kan’s strong word persuaded TEPCO to keep a small number of workers to continue to work on the plant.