– Trump Refutes Gingrich: “We Will Always Be Trying To ‘Drain The Swamp'”:

Following Newt Gingrich’s comments yesterday that Donald Trump no longer wants to drain the swamp, it appears the president-elect is not best pleased with this narrative…

Someone incorrectly stated that the phrase “DRAIN THE SWAMP” was no longer being used by me. Actually, we will always be trying to DTS.

Of course, the hiring of various Wall Street bankers and crony capitalists may have a few people still questioning Trump’s plans.

It seems Mr. Gingrich got a ‘tap on the shoulder’, and has just explained how wrong he was…

Read moreTrump Refutes Gingrich: “We Will Always Be Trying To ‘Drain The Swamp’”

How many have believed Zionist & Neocon Newt Gingrich’s lie that Trump is an anti-establishment outsider? 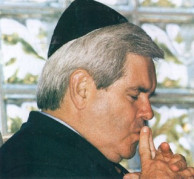 – Trump No Longer Wants To “Drain The Swamp”, Gingrich Admits:

While it will hardly come as a surprise to anyone following the ongoing additions to Trump’s cabinet, one can now effectively cross off “draining the swamp” from the list of Trump’s stated intentions.

Speaking in an NPR interview on Wednesday, former Speaker Newt Gingrich said that Trump has taken a different tone as president-elect and may be leaving behind his campaign promise to “drain the swamp.” Gingrich told “Morning Edition” that he was told Trump “now says [the phrase] was cute, but he doesn’t want to use it anymore.”

“I’m told he now just disclaims that. He now says it was cute, but he doesn’t want to use it anymore,” Gingrich said, and also predicted there would be “constant fighting” over Trump’s efforts to reduce the influence of lobbyists and Washington insiders. “But, you know, he is my leader, and if he decides to drop the swamp and the alligator I will drop the swamp and the alligator,” he said.

Trump is a satanic Illuminati puppet like the Bush’s, the Clinton’s and Obama.

More info on Donald Trump and Newt Gingrich down below.

Except maybe for NOT voting.

“I will say this: We now have the weapons we need to break through the idiotic there aint no conspiracy, I can drink my F*ing beer crowd. The Newt Gingrich video below, where he spills the beans on trump not being a secret society insider proves in a less than two minute video that the conspiracy is real, and if someone calls you a conspiracy nut after seeing it, you have my full permission to beat the hell out of them, an action I would now strongly encourage if they are that freaking dense.

In addition to the Newt video, which is posted below, This long and detailed Carl Cameron expose of Israel infiltrating the United States is another blockbuster.

There are more. I will dredge them up, but for now, for God’s sake download this Newt Gingrich video that blows the entire conspiracy wide open and share it with people, at this point there is probably nothing better that I can do. I now think the Donald “drumpf” report is probably bogus.”

“He’s an outsider, he’s not them, he’s not part of the club, he’s uncontrollable. He has not been through the initiation rites, he did not belong to the secret society”

This video is a major problem for the global elite, Newt might get nailed for messing up this badly.”

Really? And who would believe Newt Gingrich?

How can he possibly know that Trump is NOT part of a secret society???

Let’s first take a look at Donald Trump (before we look at Newt Gingrich):

Read moreNewt Gingrich Confirms “Trump Is Not Secret Society!” (Video) – And Who Would Possibly Believe Anything Newt Gingrich Says???

On the eve before the GOP Illinois primary, one might ask:

How the hell does SGTreport have election “results” for a Republican primary in Illinois which has yet to take place?

We have long argued that the fix is in, but this… um… leaves us speechless. We don’t believe these numbers will represent the “actual” results of Tuesday’s Primary, the question is, why are ANY results, and a clear winner shown here? And why is Ron Paul shown with only 3% of the vote?

Posted on – MONDAY NIGHT, March 19th – on the web site of Chicago ABC News Affiliate WLS-TV are the following election results, clearly labeled as “Illinois Races, Federal Offices”. If we have this wrong, please let us know why this information exists in ANY form. Or, if we are indeed living in a banana republic, copy that. You now have our blessing to move out of the country.

**UPDATE: Some time around 12:40 a.m. CST on Tuesday morning the web page (original link below) with the election data you see here was removed from the WLS-TV website. 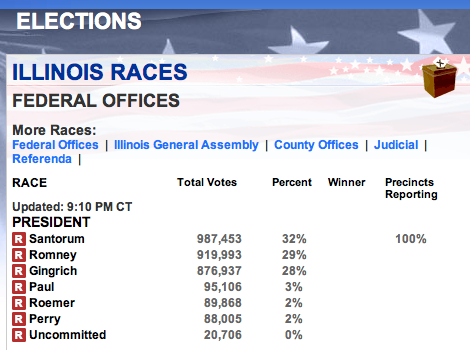 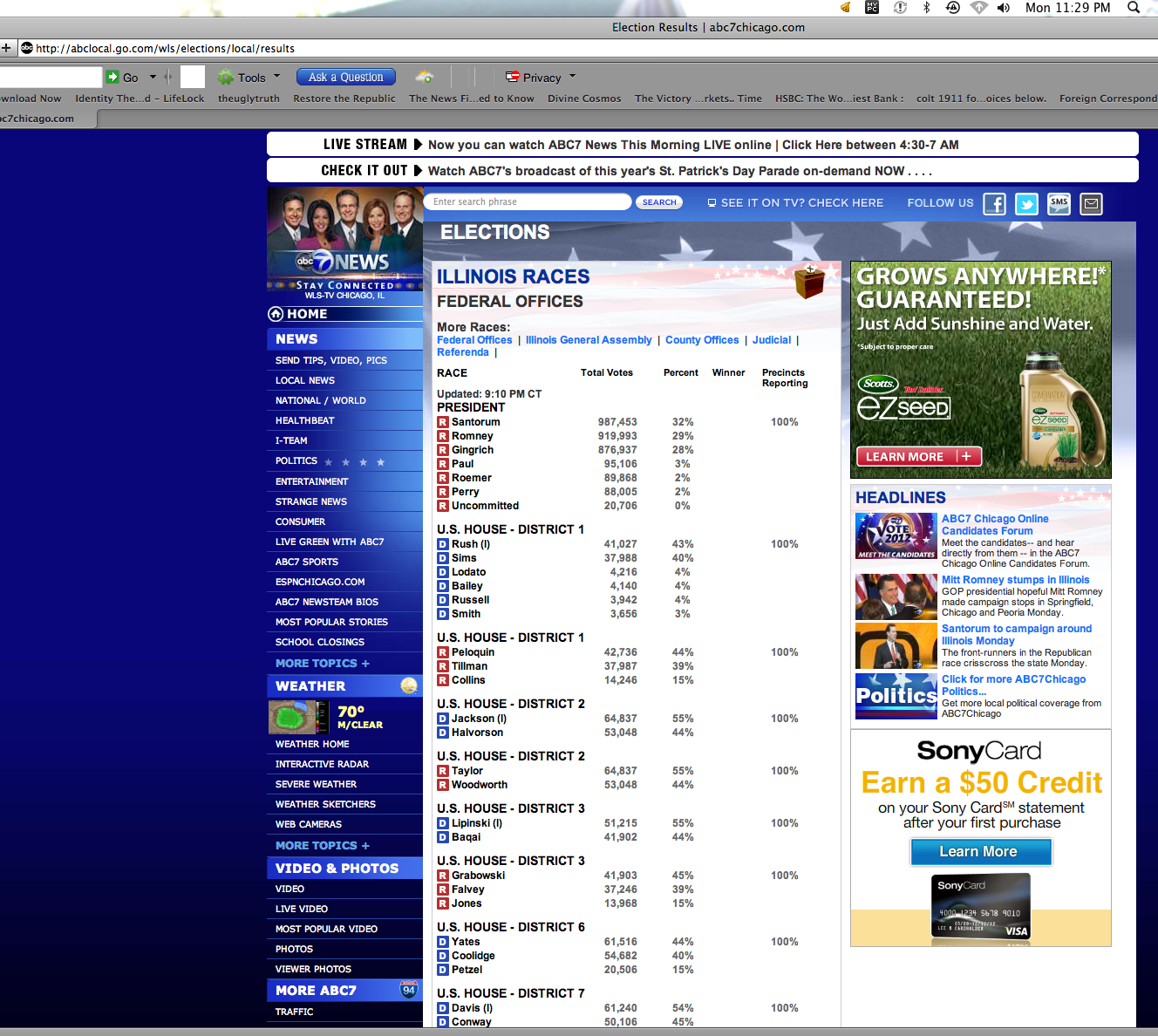 – Ron Paul Defeats Obama In Head To Head Polling (Here’s a chart you won’t see anywhere in the mainstream media – not the right, and certainly not the left.)

Republican presidential candidate Mitt Romney picked up 13 of the 26 delegates at stake in Wyoming, based on new results from the state’s county conventions that concluded Saturday.

While the former Massachusetts governor won the Wyoming caucuses on February 29, delegates were not allocated until this weekend.

Combined with Romney’s other delegate hauls on Saturday in Guam, the Northern Mariana Islands and the Virgin Islands, CNN’s delegate estimate now shows that Romney leads the GOP pack with 458 delegates.

this was a live feed on CNN consisting of JEWISH caucus goers. the one time we get to hear the live results instead of have the results being delivered to us, ron paul wins HUGE! the tally was
Santorum -16
Gingrich – 57
Romney – 61
Paul – 183

Caucuses are a hotbed for corruption. Votes can be changed, tossed, or miscounted at almost any time in some caucus settings. Transparency has been eliminated in the process as some counties wisp their results away to a secret location to tally the vote totals.

News coverage surrounding the Paul campaign has highlighted his failure to place first in 4 early contests, but online forums and organizations have been labeling voter fraud a potential culprit.

The media is not reporting on Congressman Paul’s record breaking event crowds of over 3,000 in St. Cloud, 1,500 in Colorado, and other audiences trending the same numbers throughout the campaign.

The Paul team is a well-oiled grassroots machine and has always been expected to perform exceptionally well, and even win in the caucus states.

With that being said Ron Paul led 4 out 5 Iowa Caucus polls in the days before the event but eventually fell to third place. Paul led FOX, CNN, and MSNBC entrance polls and with 27% of the precincts reporting he was leading the field. Slowly as the tallies updated Paul fell to second behind mitt Romney and then suddenly to third behind Santorum by a few thousand votes.