Alois Irlmaier predicted in around 1950 that the US will get the greatest revolution of all time.

(It has also been predicted that bringing all troops home (from all over the globe) will not be sufficient to put an end to the coming civil war.) 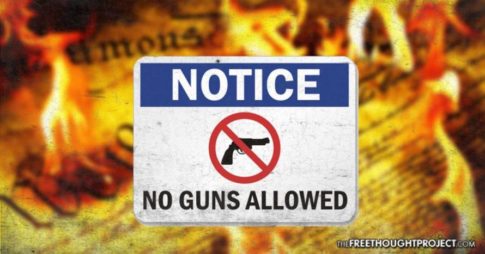 – Illinois Town Bypasses Constitution, US Citizens Given 60 Days To Turn In Guns Or Become Criminals:

Residents of a town in Illinois were just handed down an unconstitutional decree from their local government, they now have 60 days to give up their guns or be fined up to $1000 per day…

As the state promises gun rights activists they’re not coming for their guns, behind the scenes they’re pleading for it to happen. And now the feared gun grab is occurring. Residents in Deerfield, Illinois have 60 days to surrender their “assault weapons” or face fines of $1000 per day per gun.

The gun ban ordinance was passed on April 2nd with residents left with few choices of how to dispose of their valuable “assault weapons.” Upon careful reading of the ordinance, residents will be left with revolvers, .22 caliber “plinking” rifles, and double barrel shotguns to defend their homes and families from criminals who could care less about the law.

Fines for not disposing of the weapons range from $250 to $1000 per day per gun for those who choose not to comply with the city’s ordinance. While a fine may seem reasonable to some, as TFTP has reported on multiple occasions, failure to pay fines always results in police action. It is not far-fetched to predict major turmoil and arrests in the event of non-compliance.

Read moreIllinois Town Bypasses Constitution, US Citizens Given 60 Days To Turn In Guns Or Become Criminals

A University of Illinois math professor believes that algebra and geometry perpetuate “white privilege” because Greek terms give Caucasians unearned credit for the subject.

But that isn’t the professor’s only complaint. She also believes that evaluations for math proficiency perpetuates discrimination against minority students, if they do worse than their white counterparts.

Rochelle Gutierrez argues in a newly published math education book for teachers that they must be aware of the identity politics surrounding the subject of mathematics.

– The State Of Illinois Is “Past The Point Of No Return”:

“The State of Illinois is past the point of no return. It does not have the ability to raise taxes or cut spending to the degree necessary to reduce the annual cost of bond and retiree benefits from 33% to a sustainable level…The insolvency is not the result of too much bonded debt, but rather the government promising retirement and other post-employment benefits that aren’t affordable.“…

The ‘Big Dogs’ of local government in Illinois.

Whenever we open the books, Illinois is consistently one of the worst offenders. Recently, we found auto pound supervisors in Chicago making $144,453; nurses at state corrections earning up to $254,781; junior college presidents making $465,420; university doctors earning $1.6 million; and 84 small-town “managers” out-earning every U.S. governor.

“The phase-in of the actuarial assumption is another exercise in kicking the can down the road, but we’re not sure how far the can travels.  You pay less now, pay more later.”

Late on Sunday evening the Illinois House approved the most controversial element of a budget package, a tax hike which will increase the income tax rate by 32% from 3.75% to 4.95%, and the corporate income tax rate from 5.25% to 7%, to try and end a historic budget impasse. The bill passed 72-45.

Total capitulation by Governor Bruce Rauner is in the works. The taxoholics wore him down.

“Friday’s ruling by the U.S. District Court takes the state’s finances from horrific to catastrophic,” Comptroller Susana Mendoza, a Democrat, said in an emailed statement after the ruling. “Payments to the state’s pension funds; state payroll including legislator pay; General State Aid to schools and payments to local governments will likely have to be cut.”

Illinois has been without a budget for two years and its bonds, already the lowest in the nation, face a downgrade to junk… Progress was announced yesterday: By an 84-0 vote, part of I-55 will be renamed the Obama Expressway.

– Illinois Comptroller: “The State Can No Longer Function, We Have Reached A New Phase Of Crisis”:

With just 10 days to go until Illinois enters its third year without a budget, resulting in the state’s imminent downgrade to junk status and potentially culminating in a default for the state whose unpaid bills now surpass $15 billion, Democratic Illinois Comptroller Susana Mendoza issued a warning to Illinois Gov. Rauner and other elected officials on Tuesday, saying in a letter that her office has “very serious concerns” it may no longer be able to guarantee “timely and predictable payments” for some core services.

Read moreIllinois Comptroller: “The State Can No Longer Function, We Have Reached A New Phase Of Crisis”

“We’re like a banana republic. We can’t manage our money…”

– Illinois State Official: “We Are In Massive Crisis Mode, This Is Not A False Alarm”:

“I don’t know what part of ‘We are in massive crisis mode’ the General Assembly and the governor don’t understand. This is not a false alarm” said Illinois comtroller Susana Mendoza, a Chicago Democrat.

– “Now The Pain Begins”: S&P, Moodys Cut Illinois To Near Junk, Lowest Ever Rating For A U.S. State:

“No other state or business would operate by incurring obligations to its vendors and setting up a third-party payment structure that dramatically inflates the costs of those services.”

A new study, highlighted by the Albany Times Union, indicates that taxpayers are fleeing New York and California though we’re sure it has nothing to do with oppressively high costs of living and/or burdensome tax rates in those states.

Illinois Governor Bruce Rauner was furious on Friday after unsuccessfully waging a last-minute battle to block the Teacher Retirement System pension fund from cutting its long-term return assumption from 7.5% to 7.0%, a move that puts the cash-strapped state government on the hook for up to $500 millions of dollars more in the short term.

Action this week by Illinois’ biggest public pension fund to lower its expected rate of return, could “cripple” the state’s already fragile finances, Governor Rauner has warned. “If the (TRS) board were to approve a lower assumed rate of return taxpayers will be automatically and immediately on the hook for potentially hundreds of millions of dollars in higher taxes or reduced services… the unforeseen and unknown automatic cost increases would have a devastating impact.“

– Is Illinois Exporting Corruption Into Missouri?

– Welcome to Illinois (Where Every 5 Minutes Someone Moves Out):

Illinois has the worst migration statistics in the nation. Every 5 minutes, someone decides to leave.

Illinois state workers, are the highest paid in the nation.

Yet, despite the fact that Illinois is for all practical purposes insolvent, the AFSCME union demands four-year raises ranging from 11.5 to 29 percent, overtime after 37.5 hours of work per week, five weeks of vacation and enhanced health care coverage.

AFSCME workers already get platinum healthcare benefits that would make nearly everyone in the country green with envy.