– The Compassion Of Mitt Romney (Video)

Huntsman made the announcement in South Carolina, site of the critical first Southern primary this Saturday. His decision could provide an extra cushion of votes for Romney, who is facing stiff conservative competition from Rick Santorum and Newt Gingrich.

“Our campaign for the presidency ends, but our campaign for a (better) American continues,” Huntsman declared. “I believe it is now time for our party to unite around the candidate best equipped to defeat Barack Obama. Despite our differences and the space between us on some of the issues, I believe that candidate is Gov. Mitt Romney.”

Compare all those elite puppets to Ron Paul: 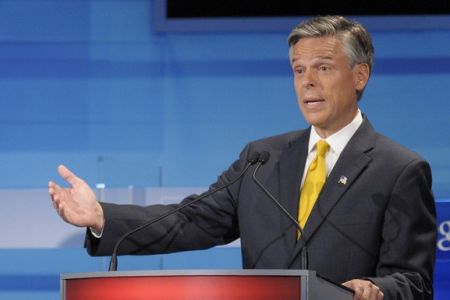 Republican presidential candidate Jon Huntsman generally has positioned himself as the GOP field’s most moderate member. But in excerpts of a foreign policy address he’s giving today, the former Utah governor threatens Iran with attack if it successfully pursues nuclear weapons, Politico reports.

“I cannot live with a nuclear-armed Iran. If you want an example of when I would use American force, it would be that,” Huntsman says.

He has voiced such a view previously, telling New Hampshire’s WMUR radio station: “What do you do when Iran all of a sudden develops a weapon of mass destruction over the near year to year and a half? . . . Now, if ever there was a reason to consider using U.S. force, it would be in pursuit of situations like that.”

“I cannot live with a nuclear-armed Iran. If you want an example of when I would use American force, it would be that,” AFP quoted Huntsman as saying on Monday, while outlining his foreign policy in an address at a university in New Hampshire.

Read morePresidential Candidate Jon Huntsman Wants Preemptive Iran Strike: ‘I Cannot Live With A Nuclear-Armed Iran. If You Want An Example Of When I Would Use American Force, It Would Be That’

Total of 101,835 votes – click on the “Display Comments” bar below to sort comments