– Trump Refutes Gingrich: “We Will Always Be Trying To ‘Drain The Swamp'”:

Following Newt Gingrich’s comments yesterday that Donald Trump no longer wants to drain the swamp, it appears the president-elect is not best pleased with this narrative…

Someone incorrectly stated that the phrase “DRAIN THE SWAMP” was no longer being used by me. Actually, we will always be trying to DTS.

Of course, the hiring of various Wall Street bankers and crony capitalists may have a few people still questioning Trump’s plans.

It seems Mr. Gingrich got a ‘tap on the shoulder’, and has just explained how wrong he was…

“I want to report that I made a big boo-boo. I talked this morning with President-elect Donald Trump and he reminded me, he likes draining the swamp,” Gingrich said in a video he posted on Twitter, I mischaracterized it the other day. He intends to drain the swamp.”

I goofed. Draining the swamp is in, @realDonaldTrump is going to do it, and the alligators should be worried. #DTShttps://t.co/nCHs61gpvepic.twitter.com/OCO7eaSKvk

To be sure, for some, like Ray Dalio, putting mostly business executives and billionaires “first” is a good sign. 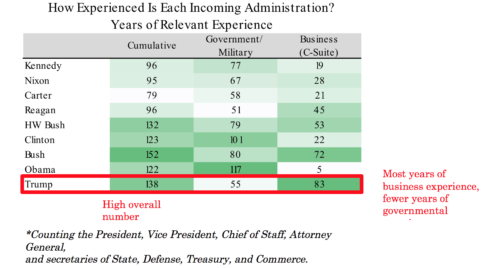 Others, like a far angrier Mike Krieger, are yet to be convinced…

As I highlighted in the recent post, The Election Never Ended: “As Anthony Scaramucci, a hedge fund manager and top adviser to Trump, as well as a former Goldman Sachs banker himself, put it Thursday: “I think the cabal against the bankers is over.”

Indeed, as we all know, U.S. government economic policy has been essentially handed over to Goldman Sachs during this transition period. Must be a reward for its most recent settlement for rigging yet another market.

Penalties don’t change the behavior of white collar criminals. Jail sentences would, but we don’t see any of that when it comes to bank execs. Thanks for playin’ America.

Well, if Krieger is right and Trump has indeed outsourced the management of the US economy to Goldman, the silver lining is that the inevitable systemic reset will simply come that much faster.