She ran the website Learn the Risk dot org

In 1999 the CDC, NIH, FDA all knew that children who received the HepB #vaccines at day 1 of live had an increased risk of 1135% to get #autism over children who waited 60 days. Watch the deception unfold… pic.twitter.com/Na8Q727lJy

Dr. Klinghardt also talks about the Dark Side of the coronavirus in this video…

Here is an example: 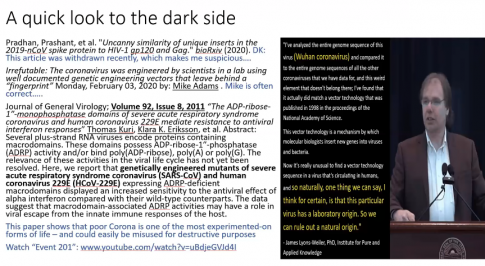 Heartwarming to see our governments removing medicines from the market that have proven to cure coronavirus patients.

On Andrographis paniculata, mentioned in the video:

Creat in English/Kalmegh in German (Andrographis paniculata), known as “Indian Echinacea” & “THE KING OF BITTERS”, is also one of THE main herbs to heal Lyme’s disease.

Intuitively I would say that Aloe aborescens, successfully used to treat cancer, should be very effective as well. And yes, it’s very bitter.

Well, there is more you could do than what Dietrich Klinghardt mentions in the video (and I know that he knows about this), however this video is certainly some info you do not want to miss.

Longterm I. U. readers certainly know a lot about all of this already.

The video might get especially interesting for you from 00:45:13 onwards…. A top doctor has gone on the record to blow the whistle in a video statement and reveal that flu vaccines have been laced with “cancer-causing ingredients.”

Dr. John Bergman has revealed the influenza vaccinations being used to combat the latest H3N2 strain, are virtually ineffective and being forced onto the public through fear tactics to spread cancer. – Stunning finding reveals autism is highest in areas with the highest vaccination rates:

The surge of autism diagnoses in recent years has left many people looking for an explanation. Oft-labeled a “conspiracy theory,” or something to that effect, the suspicion that vaccines are a potential cause of autism is on the rise. New research from the Canadian government has indirectly shown that in highly vaccinated populations, autism rates are noticeably higher. These shocking findings are sure to leave vaccine propagandists reeling while they try to somehow discredit the findings of a government agency.

As The World Mercury Project reports, Canada ranks in the “top 10” countries for autism rates. In 2018, it was revealed that 1 in 66 Canadian children were on the autism spectrum, based on data collected in 2015. – World Renowned Scientists Have Their Lab Shut Down After Troublesome Vaccine Discovery:

In the 90’s, Dr. Antonietta Gatti discovered the relationship between micro- and nano-particles as well as a great number of pathologies: cardiovascular diseases, many forms of cancer, multiple neurological diseases, and autoimmune diseases. She’s taken part in many international research projects, including the pathologies induced by depleted uranium, waste incineration, food polluted with inorganic particles, and more.

Currently, she is the coordinator of the Italian Institute of Technology’s Project of Nanoecotoxicology, called INESE.

She is also a selected expert of the FAO/WHO for the safety in nanotechnological food, and a Member of the NANOTOX Cluster of the European Commission and the author of a book titled “Nanopathology: the health impact of nanoparticles,” and on the Editorial Board of Journal of Biomaterials Applications and a member of the CPCM of the Italian Ministry of Defense.

Furthermore, her and her husband Dr. Stefano Montanari founded a laboratory called Nano-diagnostics for the evaluation of the pathological tissues of patients, it’s presently at the University of Modena and Reggio Emilia, Italy.

Recently, the Italian police raided their home, the police took all  digital assets that were owned by the the two nanopathologists, including laptops, computers, and flash-drives, basically years of work and research.

James Grundvig via the World Mercury Project describes what happened quite well:

“Because Gatti and Montanari had taken their research of nanodust and nanoparticles, from in-vivo (performed in a living organism) and in-vitro (performed in a test tube) to what unseen contamination might reside in vaccines in 2016, they came under the microscope of the United States, European, and Italian authorities. They had touched the third rail of medicine. They had crossed the no-go zone with the purported crime being scientific research and discovery. By finding nano-contamination in random vaccines, Gatti and Montanari revealed, for the first time, what no one knew: Vaccines had more than aluminum salts adjuvants, Polysorbate-80, and other inorganic chemicals in them, they also harbored stainless steel, tungsten, copper, and other metals and rare elements that don’t belong in shots given to fetuses, pregnant women, newborns, babies and toddlers developing their lungs, immune and nervous systems.”

– Teenager died in her sleep weeks after being given HPV vaccine as experts reveal the lives of thousands of girls have been destroyed by the controversial jab:

Out of the ashes of government tyranny comes a solution.

In the Australian state of Queensland, childcare facilities can refuse to allow unvaccinated children to attend, so…

Parents there have formed their own community, which has already grown to 800 members. As ABC (Australia) reports:

“Hopefully educating our kids to knowingly avoid this just might save lives.”

– Teenage boy dies from meningitis only months after receiving the vaccine:

A teenage boy, vaccinated against four strains of bacterial meningitis, became ill with a deadly form of meningitis just months after receiving the vaccine. Within 72 hours after contracting meningitis, 19-year-old Lewis Hilton lost motor control, stopped breathing on his own, and passed away.

Hilton was an active rugby player who was promised protection from meningitis when he got the quadrivalent vaccine last September. The National Health Services confirmed that a deadly strain of meningitis ultimately overtook his body, sending him into paralysis and death.

When he fell ill with flu like symptoms, Hilton’s father took him from work. He didn’t have any purple rash, a sign of typical meningitis infection. The flu was ruled out because meningitis infection affects the spinal cord, the brain lining and limb movement.

Influenza epidemic caused by vaccines itself according to health officials

As thousands continue to die from the deadly flu outbreak, health officials have now come forward to confirm that the influenza epidemic was actually caused by the vaccine itself.

According to CDC (Centers for Disease Control and Prevention), this year’s dominant strain is H3N2, which is far more severe than other previous strains, leading to more extreme, and often fatal, symptoms.

– Have DDT and Polio Vaccines been Used for Population Control?:

Why would world governments continue to authorize the use of banned and dangerous vaccines like polio, and chemicals, such as DDT, in developing countries, even though there are other far safer products available?

In a recent interview, obstetrician and gynecologist Dr. Wahome Ngare stated that:

“The World Health Organization and other UN organizations together with eugenic organizations like the IPPF have had a population control agenda aimed at the lower developed countries (LDC) for a long time.”

To back his powerful and damning statement, Dr. Ngare produced a document titled National Security Study Memorandum 200 (NSSM 200) – April 1974, outlining the U.S. government’s plans to lower the population in the following countries:

With just a single dose of this 100-year-old drug, autistic children experienced remarkable positive cognitive and emotional improvements. Some of the children spoke their first sentences in more than a decade. This is truly a ‘game changer.’

According to a revolutionary new study, a drug discovered more than a century ago may hold the key to combating the symptoms of autism. After just one dose, parents of the children in the study watched their kids make incredible improvements, with some speaking for the first time.

The study’s lead researcher, Dr. Robert Naviaux of the San Diego School of Medicine is an internationally known expert in human genetics, inborn errors of metabolism, metabolomics, and mitochondrial medicine. He is the discoverer of the cause of Alpers syndrome — the oldest Mendelian form of mitochondrial disease — and the developer of the first DNA test to diagnose it. Naviaux is, by far, one of the most qualified people in the world to conduct this study.

During his research, Naviaux noted the transformative results of the drug suramin which was first developed in 1916 and used as an anti-parasitic drug for treating African sleeping sickness and river blindness. After giving a single dose of suramin to boys with autism, between the ages of five and 14, Naviaux recorded something incredible — their symptoms were significantly alleviated.

“After the single dose, it was almost like a roadblock had been released,” he said. “If the future studies show that there’s continued health benefits, this could be a game-changer for families with autism.”

The study was published in the Annals of Clinical and Translational Neurology. During the study, five children were given suramin, while the remainder were given placebos. Included in the group were four non-verbal children, two 6-year-olds, and two 14-year-olds.

“The six-year-old and the 14-year-old who received suramin said the first sentences of their lives about one week after the single suramin infusion,” Naviaux told the UC San Diego Health website. “This did not happen in any of the children given the placebo.”

– President Trump Said in 2015 that He Never Had Flu Shots and Never Had the Flu. Meanwhile Everyone Else Being Pressured to Get These Shots