– Have DDT and Polio Vaccines been Used for Population Control?:

Why would world governments continue to authorize the use of banned and dangerous vaccines like polio, and chemicals, such as DDT, in developing countries, even though there are other far safer products available?

In a recent interview, obstetrician and gynecologist Dr. Wahome Ngare stated that:

“The World Health Organization and other UN organizations together with eugenic organizations like the IPPF have had a population control agenda aimed at the lower developed countries (LDC) for a long time.”

To back his powerful and damning statement, Dr. Ngare produced a document titled National Security Study Memorandum 200 (NSSM 200) – April 1974, outlining the U.S. government’s plans to lower the population in the following countries:

Once the most feared virus on the planet, polio was wiped out in the United States in in 1979 thanks to the success of the vaccine.

But while that’s good news for the world, a few polio survivors who rely on iron lungs to help them breathe are struggling to cope with their decades-old machines which are no longer covered by their insurance or serviced by manufacturers who stopped production in the 1960s.

Paul Alexander, 70, of Dallas, is one of just a handful of people around the world who needs the iron lung to survive.

“UKColumnNews 12/10/2017 [especially for those who believe Brexit is happening!]”

– The true story of SV40, the cancer-causing virus hidden in polio vaccines:

Poliomylitis, or polio for short, is a disease that has been around since ancient times, and despite the medical advances we have made in the United States in terms of regular and natural health, there is still no cure for this dreaded, disabling disease.

An infectious viral affliction that attacks nerve cells and, at times, the body’s central nervous system, polio causes a phenomenon known as muscle wasting (a decrease in the mass of muscle), and can also cause paralysis and death. 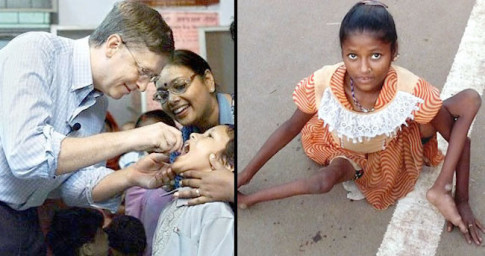 A mutated strain of Polio has made its way to Europe – as medical authorities admit that the Polio vaccine program led by Bill Gates had ended up creating a more deadly strain of the disease.

In 2011 Doctors in India reported that young children were being crippled in huge numbers after receiving the oral polio vaccine –  with 47,000 children crippled and permanently disabled as a direct result of the vaccine.

– CDC Admits 98 Million Americans Received Polio Vaccine In An 8-Year Span When It Was Contaminated With Cancer Virus:

The CDC has quickly removed a page from their website, which WAS cached here (since removed by google so you can view an image of the cache here), admitting that more than 98 million Americans received one or more doses of polio vaccine within an 8-year span from 1955-1963 when a proportion of the vaccine was contaminated with a cancer causing polyomavirus called SV40. It has been estimated that 10-30 million Americans could have received an SV40 contaminated dose of the vaccine. 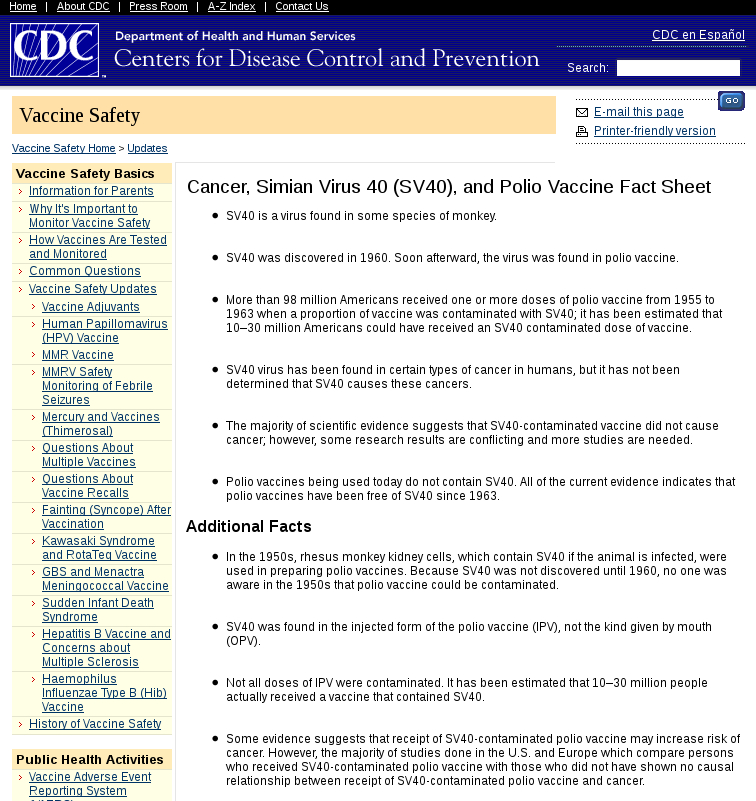 – Can vaccines cause autism, cancer, other deadly diseases? What does that mean about Ebola vaccine? (Washington’s Blog, Nov 14, 2014):

Read moreCan vaccines cause autism, cancer, other deadly diseases? What does that mean about Ebola vaccine? 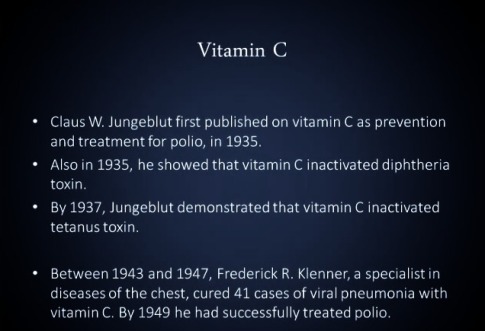 Clinical Guide to the Use of Vitamin C

After Frederick Klenner died in 1984, his friend (and mine), Arthur Rybeck, a nutritionally-oriented dentist practicing in Wheeling, West Virginia, asked if I would be interested in going over the 27 papers Klenner had written from the early 1940’s to the early 1970’s. The whole idea would be to let the world know how thoughtful and careful a researcher he was, and to encourage others to continue his work. If a compendium of Vitamin C (and other nutritional) therapy could be compiled from the published work of Dr. Klenner, maybe we could get more traditional medicine-oriented doctors to use his methods for the relief of sickness and suffering.

Standard doctors tend to believe studies and reports if published, but tend to disbelieve hearsay stories about treatments that patients have read in a “health” newsletter.

I have used Dr. Klenner’s methods on hundreds of patients. He is right. It helps almost every condition and situation, and my failures were due to inadequate amounts.

Read moreClinical Guide To The Use Of Vitamin C