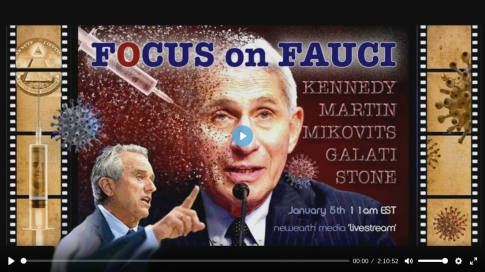 The event will bring before the public the vast pathology of crimes against humanity, which many key researchers and experts allege against Anthony Fauci (the most powerful man on earth in the public health administration sector).

– Robert F. Kennedy Jr: “New COVID Vaccine Should Be Avoided At All Cost”

This is the beginning of the implosion of the decades-long vaccine cover-up conspiracy run by the CDC, FDA, a corrupt federal government, criminally-run vaccine manufacturers and a complicit “fakestream media” that prints whatever the CDC tells them to print. (See detailed infographic below that outlines the many players in this massive criminal conspiracy that targets children.)

Here, I’m give you an overview of RFK and his position on vaccines, Thimerosal, neurotoxicity and the latest established science. First, however, review these indisputable facts about vaccines as background. (RELATED: Stay informed on the truth about vaccines at Vaccines.news) Read moreRFK, Jr. Wants Me Jailed … As A War Criminal! Criminals of the worst kind!!!