On top of all the sicko pedophilia and child trafficking going on in America, there’s also the vaccine industry: A cartel of toxic mercury pushers whose denial of the periodic table of elements (yes, they are science deniers) turns them into “medical child molesters” as they demand more and more children be injected with toxic mercury, a known neurotoxin and potent heavy metal that causes brain damage.

As any genuine scientist or chemist knows, there is no such thing as a safe quantity or safe form of mercury for injecting into children. The continued advocacy of vaccines containing mercury — which continue to be pushed onto children and pregnant women all across America — is a crime against children and a gross violation of the American Medical Association’s code of medical ethics. (RELATED: Read more news about modern medicine’s ethical failures at Medicine.news)

This is the beginning of the implosion of the decades-long vaccine cover-up conspiracy run by the CDC, FDA, a corrupt federal government, criminally-run vaccine manufacturers and a complicit “fakestream media” that prints whatever the CDC tells them to print. (See detailed infographic below that outlines the many players in this massive criminal conspiracy that targets children.)

Here, I’m give you an overview of RFK and his position on vaccines, Thimerosal, neurotoxicity and the latest established science. First, however, review these indisputable facts about vaccines as background. (RELATED: Stay informed on the truth about vaccines at Vaccines.news)

We visited the headquarters of Eli Lilly in downtown Indianapolis where the power of Big Pharma has carved out Indiana’s political landscape, supplied its lobbyists and operatives, and created an empire of profits by (reportedly) treating the symptoms, hiding the risk and harm, and insisting on the safety of products – like Thimerosal and Prozac – without sufficient testing, and even less regard for the lives affected.

Driving up towards it, I had a sick feeling in the pit of my stomach. What we know about this place was just enough to make me feel ill.

With the shameful record of having only one sham of a study on the safety of Thimerosal back in the 1920s, Eli Lilly has had the gall to insist upon the safety of their products – even as its mercury preservative remains a key suspect in increasing vaccine damage cases. 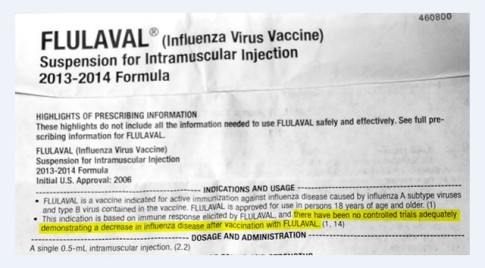 The flu shot is a fraud. But it’s a fraud that’s so deeply embedded in the delusional pro-vaccine culture of the pharma-controlled medical industry that even well-meaning doctors and pharmacists (who are otherwise very intelligent) fail to realize flu shots don’t work. In fact, flu shot vaccine inserts openly admit there is no scientific evidence demonstrating flu shots work. See the vaccine insert photos below for proof.

This is probably why people who receive the flu shot almost never receive the insert sheet. It’s not handed out by doctors and pharmacists because they don’t want people to realize the extent of the pseudoscience behind the flu shot scam. It’s so much easier to demand blind obedience while screaming “SCIENCE!” than to actually allow people to read the science and realize the science conclusively states there is “…no decrease in influenza disease after vaccination.”

Read moreFLULAVAL Vaccine Insert Admits: “… there have been no controlled trials adequately demonstrating a decrease in influenza disease after vaccination with FLULAVAL” 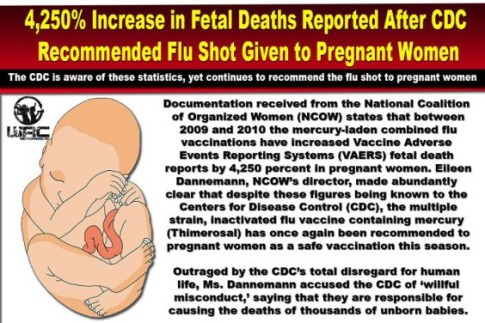 UPDATE:Livingwhole.org WAS TAKEN OFFLINE OVER THE FOLLOWING VACCINE TRUTH ARTICLE AND THEIR DOMAINDOES NOT EXPIRE UNTIL 2015! UPDATE: CLICK HERE to see what it looked like when they were taken down.

This page is getting repeatedly, and I mean REPEATEDLY hacked and needs to be fixed every half hour or so, someone is PISSED about this one.

UPDATE: Pressure from this web site got Livingwhole.org put BACK ONLINE

The best of the best and well researched anti vaccine web sites are being taken down RIGHT NOW, with all content immediately purged from the Google cache and I’d like to question WHY.

UPDATE: The owner of Livingwhole.org “posted to facebook” that she took her site down because she was “harassed”. ONE BIG QUESTION: HOW DID SHE PURGE THE GOOGLE CACHE THEN? HOW DID A HOUSE WIFE REACH INTO THE GOOGLE SERVER AND PURGE IT?.

Web sites vanish. But NOT BEFORE THEY EXPIRE and when they do vanish naturally, the Google cache will linger for months. This was not the case with Livingwhole.org, which vanished without a trace and was simultaneously flushed from the Google cache within a day of posting the following, and I beg to question WHY

Dear Parents: You are being lied to

You are being lied to. There are pharmaceutical companies who claim to be acting in the best interests of your children, but they’re putting your health and even lives at risk for the sake of profits. There are some doctors, who, despite not being trained on the history of, lack of science behind, adverse reactions, or additives in vaccinations, refuse to read the package inserts and contrary scientific evidence, and do not inform you of the true risks of a vaccine so you can make an

In this special double episode of Truthstream News, Aaron and Melissa take on the CDC whistleblower and MMR-autism scandal (and that’s just for starters) — exposing the lies and obfuscations that have hurt untold numbers. Recently released audio of the good doc has now been leaked where he says he would NEVER shoot his pregnant wife up with a thimerosal-containing vaccine.

It’s shameful, but that’s just the icing on the vaccine cake. The evidence that the CDC “hid the decline” of skyrocketing autism rates in connection with a vaccine is just the beginning. Did you know the government’s health agencies never even tested thimerosal, the 50% ethylmercury preservative shot into thousands of children daily for decades and still given to pregnant women in the form of a flu shot? In fact, the CDC says some vaccines given to children still contain trace amounts… 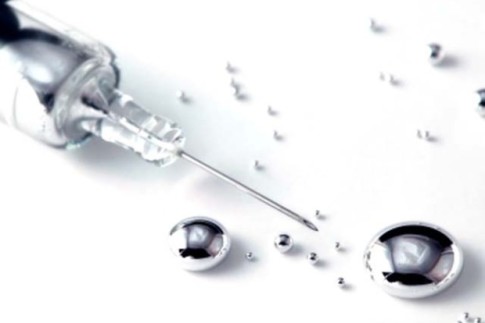 A retired professor of chemistry from the University of Kentucky has come out in condemnation of mercury in vaccines, corroborating information released by a top scientist-turned-whistleblower from the U.S. Centers for Disease Control and Prevention (CDC) who recently published a study confirming a link between vaccines and autism.

Professor Boyd Haley, Ph.D., says thimerosal, the ethylmercury-based preservative commonly used in vaccines, is lethal to all forms of life and should never be injected into a human being, especially one who is still a developing baby. Even at very low doses, thimerosal has been shown to kill neuronal cells, a fact that has been demonstrated both in vitro and in animals.

It is a common myth today that the vaccines administered to children no longer contain the toxic additive thimerosal, a mercury-based preservative linked to causing permanent neurological damage. But a recent federal case involving the U.S. Food and Drug Administration (FDA) has revealed that, contrary to this widely-held belief, thimerosal is actually still present in many batch vaccines, including in the annual influenza vaccine that is now administered to children as young as six months old.

Filed by a citizen-backed coalition advocating vaccine safety, the lawsuit against the FDA alleged that the agency’s continued endorsement and approval of thimerosal as a vaccine additive is a serious public health threat, especially since safer alternatives already exist and are widely used voluntarily by many vaccine manufacturers. But Judge Brett Kavanaugh, siding with antiquated pseudoscience, decided that thimerosal is not a health threat, and that those who wish to avoid it can simply choose thimerosal-free alternatives.

Ignoring the evidence of thimerosal’s dangers brought before him on behalf of the millions of children across the country who continue to be injected with this mercury-based additive, Judge Kavanaugh declared that the plaintiffs, which include groups like the Coalition for Mercury-Free Drugs (CMFD), did not have proper standing to file the lawsuit. And in the process, both he and the FDA inadvertently admitted that thimerosal is still present in many childhood vaccines, which counters popular claims to the contrary.

FDA admits on its website that thimerosal is still in vaccines

Thimerosal is a widely used vaccine preservative that is present in the majority of flu shots and other vaccines. Thimerosal is 49% mercury by volume, an extremely toxic chemical element that wreaks havoc on the nervous system, neurological function, and overall biological function [1]. Each dose of flu vaccine contains around 25 micrograms of thimerosal, over 250 times the Environmental Protection Agency’s safety limit of exposure.

Mercury, a neurotoxin, is especially damaging to undeveloped brains. Considering that 25 micrograms of mercury is considered unsafe by the EPA for any human under 550 pounds, the devastating health effects of mercury on a developing fetus are truly concerning.Though thimerasol is not entirely mercury, the mercury content is still extremely high, making it very toxic to the human body. Despite highly exceeding the EPA safety standards for mercury content by over 250 times, flu shots are still recommended for children over 6 months and pregnant women.

It seems that the age groups that are urged to receive the flu shot are actually most affected by mercury exposure. Young children, pregnant women, and elderly are the ‘targeted’ demographic of flu shot manufacturers, and these individuals also happen to have the least defense against the elemental neurotoxin mercury.