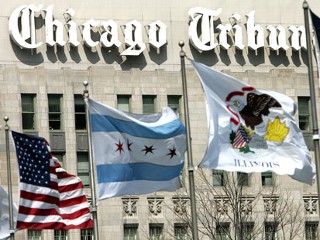 Media giant Tribune Co., saddled with billions in debt since it became a privately-held company last year, filed for Chapter 11 bankruptcy protection in a Delaware court this afternoon.

The move will allow Tribune to stay in business while it seeks better terms from its creditors.

The Chicago-based company owns a coast-to-coast empire with television stations and newspapers in most of the nation’s largest cities. Its holdings include the Los Angeles Times; cable television superstation WGN in Chicago; the Baltimore Sun; and WDCW-50 in Washington, the CW affiliate. The company also owns the Chicago Cubs.

Tribune assumed some $13 billion in debt when real estate mogul Sam Zell engineered an employee-owned transition to private ownership one year ago this month. Hopes were high among employees that the company could be re-engineered to be a news company of the 21st century.

But sharply dropping advertising revenue, a decline that has hit almost all of the nation’s newspapers in recent years, have put the company in danger of being unable to meet its debt covenants, according to a source close to the company who spoke on the condition of anonymity because Tribune is privately held.

Eight thousand pages of documents related to the Pentagon’s illegal propaganda campaign, known as the Pentagon military analyst program, are now online for the world to see, although in a format that makes it impossible to easily search them and therefore difficult to read and dissect. This trove includes the documents pried out of the Pentagon by David Barstow and used as the basis for his stunning investigation that appeared in the New York Times on April 20, 2008.

The Pentagon program, which clearly violated U.S. law against covert government propaganda, embedded more than 75 retired military officers — most of them with financial ties to war contractors — into the TV networks as “message surrogates” for the Bush Administration. To date, every major commercial TV network has failed to report this story, covering up their complicity and keeping the existence of this scandal from their audiences.

News of the Pentagon’s online posting of the documents came from Joe Trento of the National Security News Service, who notes that NSNS provided the New York Times “limited information about a military office early in the reporting process.”

Here is the official Pentagon website with the 8,000 pages of documents, the most interesting and revealing of them previously secret and only available to the Pentagon and the New York Times:

It’s reached a point that everyone has known for months it had to reach, the point at which even people paid to do so cannot keep it going with a straight face. On Tuesday, Senator Barack Obama picked up approximately 99 new pledged delegates from North Carolina and Indiana, while Senator Hillary Clinton picked up about 85. The final count may move a delegate or two, but these numbers are close enough for the following calculation.

Obama now has 1,592 pledged delegates to Clinton’s 1,419. There are 217 delegates remaining to be pledged. Of those 217, Clinton would need to win 196 to beat Obama, or a victory of 90 percent to 10 percent. That’s about as likely as Dick Cheney hitting 50 percent approval.

Will Clinton finally at long last drop out on Wednesday? Will she wait another week for West Virginia, or yet another week for Kentucky and Oregon? Will she hang in there until June to make sure Puerto Rico doesn’t win it for her, or Montana and South Dakota? And will people dumb enough to still watch television have to endure this crap all summer?