In recent weeks, the stock of IBM has staged a dramatic rebound surging from a February 11 low of $118 to $150 today, on what we previously assumed had to be another long-overdue bout of stock buybacks. However, for that to make sense, the company – already at risk of being downgraded if it did not take further cost-cutting measures to offset the additional debt interest expense – would need to engage in another round of mass layoffs.

This is precisely what happened moments ago when Germany press reported that Big Blue is cutting some 1000 jobs in Germany.

Moments ago IBM reported what can be defined simply as abysmal results.

Starting at the bottom, non-GAAP EPS of $3.34 beat expectations of $3.30 but once again thanks to the same trick the company used two quarters ago: it again reduced its effective tax rate from continuing operations down to 18.2%, 2.6% lower than a year ago. Without this reduction, and the $1.5 billion in stock buybacks, non-GAAP EPS would have missed. In fact, a simple math exercise shows that if instead of the pro-forma 18.0% tax rate, IBM had used the 20.6% from a year ago, its non-GAAP EPS would be $3.23, missing consensus. 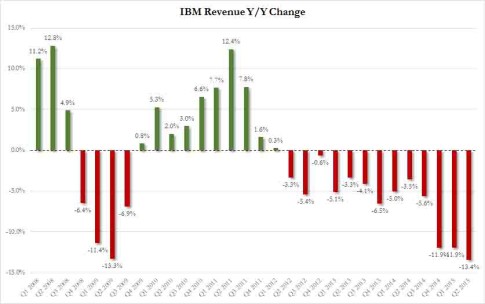 – IBM Revenue Collapse Is Now Worse Than During Peak Of The Financial Crisis (ZeroHedge, July 20, 2015):

The reason IBM stock is currently sliding and dragging down the broader Dow Jones future with it is that with Q2 revenues of $20.8 billion, the company not only missed expectations, but was a plunge of 13.4% from a year ago: a drop that surpasses the biggest revenue drop recorded during the peak of the financial crisis! This is also 13 consecutive quarter of declining Y/Y revenues.

International Business Machines Corp is considering adopting the underlying technology behind bitcoin, known as the “blockchain,” to create a digital cash and payment system for major currencies, according to a person familiar with the matter.Unlike bitcoin, where the network is decentralized and there is no overseer, the proposed digital currency system would be controlled by central banks.

– From the Reuters article: IBM Looking at Adopting Bitcoin Technology for Major Currencies

Many activists and thinkers in the anti-status quo world were understandably very suspicious of Bitcoin when it first entered mainstream consciousness during its run-up from $10 to $260 in spring 2013. I myself had heard of Bitcoin years before I publicly expressed my interest and support of the technology. With no tech background, I was immediately overwhelmed with the concept, and so I initially dismissed it and forgot about it. It was only in 2012, that I started asking questions of tech experts who I had become friends with it about it in order to calm my concerns. Considering these people have similar political leanings and are even more paranoid than I am about the corporate-gulag state, I felt somewhat reassured. Then, when I recognized the powerful political implications of the technology, I wrote my first public thoughts on it. The post was titled, Bitcoin: A Way to Fight Back Against the Financial Terrorists?

Over the weekend, in a repeat of rumors that were widespread last year, Forbes ‘reported’ about Project Chrome, a massive corporate reorganization for IBM that would see Big Blue cull over a quarter of its staff – in real terms that means over 110,000 employees, as early as next week. IBM stocks surged higher on this ‘great’ news… and then, disappointment started as “the largest corporate restructuring in history” was denied by the company…

Christmas is approaching and those bonuses are getting bigger that way.

– The Buyback Of Things: IBM To Repurchase Another $5 Billion In Stock In Next Two Quarters (ZeroHedge, Oct 28, 2014):

When all else fails, and there is no growth, what you gonna call? Buybackbusters!

A week after IBM reported atrocious earnings, due to a variety of issues but most of all because it simply repurchased the least amount of stock in the past  quarter in years (as it was approaching the limit of its buyback authorization), Big Blue is back to doing the one thing it does well: the buyback of things, in this case revealing its board has just authorized $5 billion in stock buybacks through April 2015 which means that with the $1.4 billion still under authorization, IBM is set to purchase about $3.2 billion in Q4 2014 and Q1 2015, each. And then, in April 2015, IBM will ask for an even bigger stock buyback authorization from its board. Which, clearly, the board – whose IBM stock will promptly rise as a result – will grant.

Read moreThe Buyback Of Things: IBM To Repurchase Another $5 Billion In Stock In Next Two Quarters

Remember when three short months ago we revealed what was “the scariest chart in IBM’s history”, namely the one showing IBM’s total debt to equity ratio? With this chart, incidentally, we also explained why IBM’s ridiculous stock repurchasing strategy, which had seen $37.7 billion in stock buybacks since 2012, or more than the total debt issuance of $33.6 billion during the same period could not continue and why, inevitably, IBM would have a massively disappointing quarter? Well, that quarter just hit, when moments ago in an early press release, IBM reported abysmal adjusted EPS of only $3.68, a huge miss to the $4.32 Wall Street expected, mostly a function of one simple thing: the buyback “strategy” finally hit a brick wall.

Always wanted to know the feeling of being in the eye of a monster hurricane?

Well, we all are in the eye of the biggest financial monster hurricane ever created, right now.

It’s already bad, but this is really nothing compared to what is coming.

A week ago, in retaliation to the inane charges lobbed by the US accusing 5 Chinese army officials of spying on US companies (when the NSA spying scandal on, well, everyone refuses to leave the front pages), China announced it would ban the use of Windows 8 on government computers (considering the quality of Windows 8, this is likely a decision government computers would have taken on their own regardless). Today, China has expanded its list of sanctioned companies from Microsoft to include IBM as well, following a Bloomberg report that the Chinese government is pushing domestic banks to “remove high-end servers made by International Business Machines Corp. and replace them with a local brand.”

Why is MSFT and now IBM sowing the seeds of the US government’s stupidity and failed attempts to distract from its own spying scandals? We don’t know. Here is what we do know: