– The Shale Massacre: Chevron Fires Another 7,000 After Laying Off 1,500 Three Months Ago:

Even though Chevron said in July that its cost-cutting initiatives would be “completed by mid-November of 2015” it decided to surprise everyone moments ago when on its earnings call it announced it would not only slash its capex by another 25%, but will shortly distribute another 7,000 pink slips. The reason: another terrible quarter in which the $2 billion in earnings were a 73% plunge from a year earlier.

For the 8th week in a row (something that hasn’t happened since June 2009), US total rig count plunged. This week’s 90 rig drop to 1543 is the largest so far (with oil rigs down 94 to 1223 – lowest since Jan 2013).  The total rig count is now down 20% in the last 8 weeks to the lowest since June 2010 as it tracks the 4-month lagged oil price perfectly. This is the 2nd biggest 8-week drop in 22 years. This – rather unsurprisingly – has led Chevron to decide to cut 23% of its Pennsylvania workforce “due to activity levels.” Not ‘unambiguously positive’ as so many in the central planning bureaus would have everyone believe.

It was less than 24 hours after we posted that either oil will double from here allowing energy companies to grow into a normal P/E multiple, or energy stocks will have to crash by over 40% for the ridiculous 23x to return to its normal, long-term average of 13.6x. Moments ago energy giant Chevron admitted that not only does it not see oil doubling any time soon, but that energy prices are almost certain to go far lower from here, and as a result the company decided that after buying back $5 billion of its shares in 2014, i.e., buying high and higher before the stock crashes may not be the best use of dwindling cash flow, and as a result has just suspended its stock buyback program of the rest of 2015. Yes, energy giant Chevron just ended its buyback!

“Anybody remember jewess Nuland bragging about investing $5Bn to de-stabilize the Ukraine to intimidate Russia?

Remember the big sponsorship cards all over the stage with CHEVRON plastered everywhere?

What now? The ordinary Ukrainians must really love the EU & USA now.”

Shale gas was supposed to be Ukraine’s ticket to greater energy independence from Russia. Chevron Corp. (CVX)’s decision to pull the plug has smashed those hopes.

The second-largest U.S. energy producer will pull out of an agreement for exploring the Oleska field in western Ukraine, a government official said this week. It was the final blow to the country’s dream of becoming a big shale-gas producer after Royal Dutch Shell Plc (RDSA) retreated earlier this year from a similar deal in eastern provinces riven by a bloody war with pro-Russian separatists.

While Chevron can walk away unscathed, for Ukraine it’s another blow to the prospects of reviving a chaotic economy that remains dependent on Russia, a country it claims to be in armed conflict with. Already weighed down by the war that’s killed more than 4,600 people and teetering on the verge of default, Ukraine was counting on foreign capital to develop its domestic gas resources.

“As I recall the UN is funded by the Rockefeller Foundation, as is the CFR.

David Rockefeller presides with others at the annual gathering of elite at the Bilderburg coven.

Donny Rico & Chevron make it a crime to defend the environment.

Here is another zionist about to rape another pristine part of the home of the Mountain Gorilla.”

* Oil of DRCongo says oil can boost GDP by 25 pct

KINSHASA – An oil company owned by Israeli billionaire Dan Gertler said on Thursday it had discovered around 3 billion barrels of oil in the Democratic Republic of Congo, an amount similar to the proven reserves of oil producers Britain and South Sudan.

Read moreDestroying The Jungles Of Ecuador & The Refuge Of The Last Mountain Gorilla In Congo, A World Heritage Site

“I don’t think the US government even realized how far it had spread” is how the collateral damage from the Iran-attacking Stuxnet computer virus is described by Chevron. The sleep San-Ramon-based oil giant admitted this week that from 2010 on “we’re finding it in our systems and so are other companies… so now we have to deal with it.” It would seem that little consideration for just how viral this cyber warfare tactic has become and this news (reported by Russia Today) is the first time a US company has come clean about the accidental infection. Discovered in 2010, the Stuxnet worm was reported with all but certainty to be the creation of the United States, perhaps with the assistance of Israel, to set back Iran’s nuclear enrichment program as a preemptive measure against an eventual war. In a June 2012 article published by The New York Times, government agents with direct knowledge of Stuxnet claimed that first President George W. Bush, then Barack Obama, oversaw the deployment of the worm as part of a well-crafted cyberassault on Iran. On the record, the federal government maintains ignorance on the subject of Stuxnet, but perhaps Chevron sums up the impact of Stuxnet best (given the escalating Iranian enrichment program): “I think the downside of what they did is going to be far worse than what they actually accomplished.”

America’s cyberwar is already seeing collateral damage, and it’s hitting the country’s own billion-dollar companies. Oil giants Chevron say the Stuxnet computer virus made by the US to target Iran infected their systems as well. 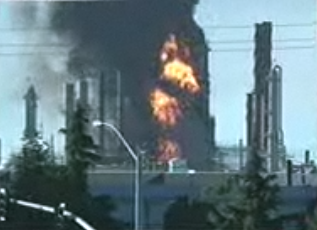 Chevron’s Richmond refinery, the largest refinery in California, is under a Level 3 Hazardous Material extreme immediate warning with local authorities advising local citizens to “to shelter in place, go inside, close all windows and doors, turn off all heaters, air conditioners and fans. If not using the fireplace, close fireplace dampers and vents, and cover cracks around doors and windows with tape or damped towels.” As KTVU2 comments, it appears massive and out of control currently. Live KRON4 stream embedded. 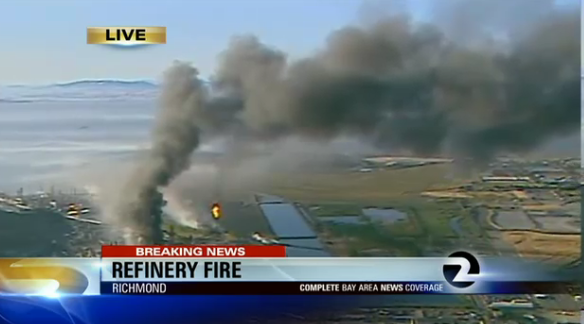 and a broader perspective of the wind’s influence… 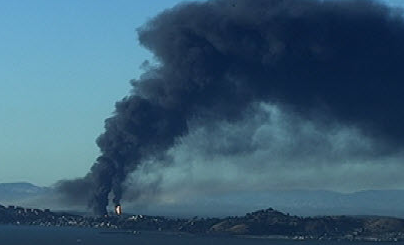 and across the bay… 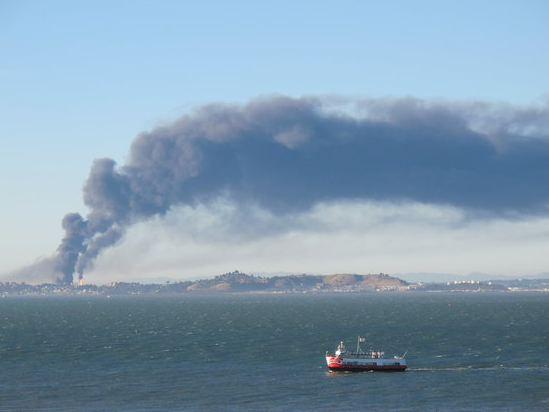