At least 5,247 Muslims have been killed in the Boko Haram insurgency across the northeastern Adamawa state of Nigeria over the past four years, a group says.

The Adamawa State chapter of Muslim Council, which comprises several Islamic organizations, said in a report on Sunday that more than 5,100 Muslims were also injured across seven local government areas of the state since 2013.

– After Losing Millions To Nigerian Scammers, A Bankrupt Boris Becker Is Liquidating His Assets:

It has already been one of the most remarkable rags to riches and then back to rags – with a bankruptcy on top – stories ever, and it is getting more bizarre by the day.

– Video from Nigeria: Over 50 Christians massacred in church during Sunday service 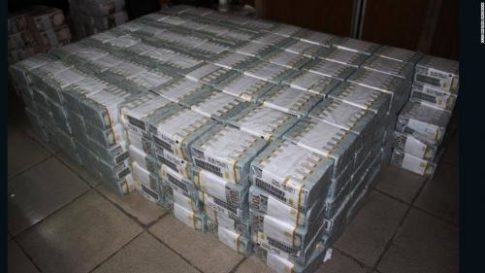 Nigeria’s anti-corruption unit discovered more than $43 million in US dollars at an upscale apartment in Lagos, after receiving an anonymous tip. The anti-graft agency said in a statement it raided the apartment Tuesday after a tipoff about a “haggard” woman in “dirty clothes” taking bags in and out of the apartment.

We always knew that this would start happening.  Earlier this month, I wrote about the severe economic problems that are plaguing South America, but up to this point I have neglected to discuss the horrific famines that are breaking out all over Africa.  Right now there is a desperate need for food in South Sudan, Somalia, northeast Nigeria, Eritrea and Kenya.  And Yemen, even though it is not technically part of Africa, is being affected by many of the same factors that are crippling nations all over eastern Africa.  The United Nations says that more than 20 million people could die from starvation and disease if nothing is done.  When I write about economic collapse, this is the kind of thing that I am talking about, and we are starting to see alarming conditions spread across the globe.  Many believe that we could never possibly face this kind of food crisis in the western world, but unfortunately wishful thinking will only get you so far.

After serving in the Georgia Legislature, in 1992, Cynthia McKinney won a seat in the US House of Representatives. She was the first African-American woman from Georgia in the US Congress. In 2005, McKinney was a vocal critic of the government’s response to Hurricane Katrina and was the first member of Congress to file articles of impeachment against George W. Bush. In 2008, Cynthia McKinney won the Green Party nomination for the US presidency.

– Shame on Shell: Ecocide by oil extraction in the Niger Delta:

Millions of barrels of oil have been spilled in Nigeria’s Delta region. Tired of the abuse, Nigerians just blew up a pipeline and a platform in an attempt to rectify what politicians and courts have been slow to do.

As a result of the deteriorating security situation, the Nigeria oil union announced that Shell and Chevron workers have been evacuated.

Read moreShame On Shell: Ecocide By Oil Extraction In The Niger Delta

In written objections submitted to the Nigerian biosafety regulators Monday, the groups have cited numerous serious health and environmental concerns and the failure of these crops, especially GM cotton, in Africa.

– US Troops Headed to Front Lines in Nigeria’s War With Boko Haram:

The Pentagon is prepared to approve a new plan to redeploy ground troops already in Nigeria to the front lines of that nation’s war against Boko Haram, saying they will be positioned close to fighting but in a purely “non-combat role.”

The troops were originally sent to Nigeria for “training” of that nation’s military for the war on terror, and the redeployment would have them in “advisory” roles, putting them right in the middle of the action.

– Over 80 killed, children burnt to death in Boko Haram attack in Nigeria:

Boko Haram militants killed 86 people, including children, in their recent attack on villages in northeastern Nigeria on Saturday. Horrifying details of the attacks emerged on Sunday.

The Saturday night assault on the outskirts of the Nigerian city of Maiduguri – the birthplace of Boko Haram – lasted for hours, targeting villages and camps housing some 25,000 refugees, AP has reported, citing survivors and soldiers at the scene. By Sunday afternoon, 86 bodies had collected, officials said, adding that another 62 victims were being treated for burns.