French President Emmanuel Macron spent €26,000 – over $30,000 – on makeup in his first three months as leader of the country. Which apparently is a bargain: his predecessor, François Hollande, spent €30,000 per quarter on makeup and another €10,000 on a personal hairdresser.

– French President Fires Back At Trump Over Paris Comments:

“I won’t make comparisons but here, people don’t have access to guns. Here, you don’t have people with guns opening fire on the crowd simply for the satisfaction of causing drama and tragedy,” Hollande said, responding to Trump’s statement that “Paris is no longer Paris” after recent terrorist attacks.

In the latest confirmation of deteriorating relations between Moscow and the West, Russian President Vladimir Putin canceled a visit to Paris next week after President Francois Hollande said he would see him only for talks on Syria.

Over the weekend, tensions emerged between Moscow and Paris after the Russian UN delegation vetoed a French-drafted United Nations Security Council resolution on Syria. French officials’ growing anger over a Russian-backed Syrian offensive against rebel-held areas of the city of Aleppo had led them to reconsider whether to host Putin on Oct. 19, Reuters reports.

“I made it known to Mr Putin that if he came to Paris, I would not accompany him to any ceremonies, but that I was ready to continue the dialogue on Syria. He decided to postpone the visit,” a questuionably hospitable Francois Hollande said earlier at the Council of Europe in Strasbourg. 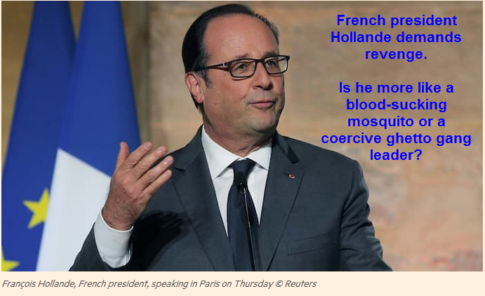 It is becoming increasingly apparent there is actually no reason for the UK to show up at the Brexit “negotiations”.

Judging from EU reactions from the “gang of 27”, and more recently from France and Germany there is no reason at all for the UK to show up.

Britain should accept hundreds of migrant children from the Calais ‘Jungle’ camp while continuing to fund £87 million worth of security measures around the port, the French President has said.

Speaking after making a pledge to close the camp by the end of the year, François Hollande said Britain “would be called upon” to help his plan to resolve the migrant crisis in northern France.

ARIS (AP) — President Francois Hollande says he hopes authorities can relocate as many as 9,000 migrants massed in a squalid camp in Calais to reception centers across France in the coming weeks.

Hollande, visiting one of France’s 164 such reception centers in the city of Tours on Saturday, reiterated his pledge to shut the Calais camp, known as “the jungle.”

– ‘No Camps in France,’ Vows Hollande, Under Right Wing Pressure:

(AFP) – President Francois Hollande, under pressure from the right wing, on Saturday stepped up his pledge to combat illegal migration, vowing to dismantle a squalid settlement near Calais and prevent similar camps from becoming established in France.

“There will be no camps in France,” said Hollande, two days ahead of a maiden visit to the notorious “Jungle” settlement near Calais, where between 7,000 and 10,000 desperate migrants live.

– Hollande Vows “All Out War” Against ISIS After Priest Killing:

Shortly after the latest terror attack on French soil by two ISIS “soldiers”, President Francois Hollande, who was roundly disparaged 12 days ago for the country’s lack of preparedness to the Nice truck terror attack which killed 84, vowed to wage war against the Islamic State “by every means“.

“We are confronted with a group, Daesh, which has declared war on us,” Hollande said, using an alternative name for Isis. “We have to wage war, by every means, (but through) upholding the law, which is because we are a democracy.”

Hollande was speaking in a lightning visit to the northern French town of Saint-Etienne-du-Rouvray, just hours after the attack took place. Shortly after he spoke terror group Isis claimed responsibility saying that its “soldiers” had carried out the attack.

Read moreHollande Vows “All Out War” Against ISIS After Priest Killing