Coming to a country near you (very) soon…

Continue to prepare for (total) collapse.

Ukraine spirals into chaos
Poroshenko is a billionaire while Ukraine's per capita GDP drops 75% & there is no coal https://t.co/mLEragO61m pic.twitter.com/oYELRrlmMa 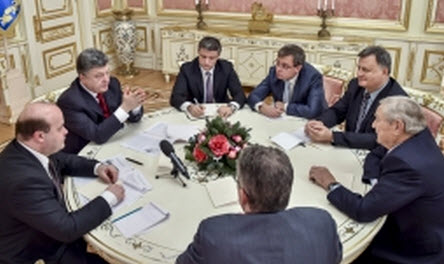 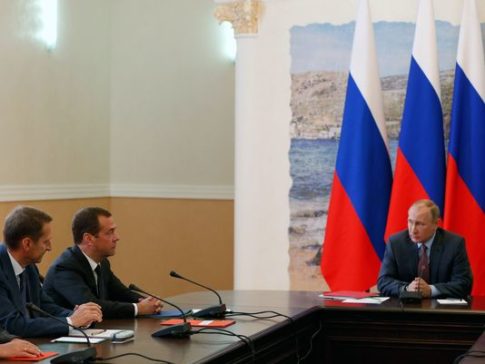 Putin chairs a meeting with permanent members of the Russian Security Council
at the Belbek airport near the Black sea port of Sevastopol, Crimea.

– Putin Flies Into Crimea As Ukraine “Prepares For An Invasion”:

At the same time that Russia is condicting its latest massive military drill on the border with Ukraine, and one day after the latest stark warning by Ukraine’ president Poroshenko that the simmering conflict with Russia may be set to explode again when he said on national TV that “the probability of escalation and conflict remains very significant” adding that “we don’t rule out full-scale Russian invasion”, Russian president Putin made a not so subtle point that Crimea will not be relinquished when he flew into contested territory on Friday, one day after staging war games there, and said he hoped Ukraine would see “common sense” when it came to resolving a diplomatic crisis over the peninsula.

Officially, Putin arrived on a working visit in Crimea, where he held a briefing with members of the Russian Security Council and visited the Tavrida international youth forum, a RIA Novosti correspondent reported Friday. The schedule of Putin’s visit to Crimea, at least his fifth in the past two years, also involves meetings with local officials, according to local media reports that broke news of the visit this week.

Read morePutin Flies Into Crimea As Ukraine “Prepares For An Invasion”

The last month has seen Russia pull out of peace talks (citing attacks in Crimea and detention of key individuals) and an increasing mobilization of Ukraine troops near the Russian border, and now, after the deadliest month since last August, Ukraine president Poroshenko has warned he isn’t ruling out a full-scale Russian invasion and may institute a military draft if the situation with its neighbor worsens.

Ukraine’s incredibly unpopular prime minister has finally resigned. He will probably be forever remembered by his nickname ‘Yats’ – given to him by the Assistant Secretary of State Victoria Nuland. Yatsenyuk’s failure in power speaks volumes about the many failures Ukraine has experienced since the illegal regime change two years ago.
CrossTalking with Michael Vlahos, George Szamuely, and Richard Sakwa.

And just in case somebody still doubts who started it …

And now he becomes governor in Ukraine. 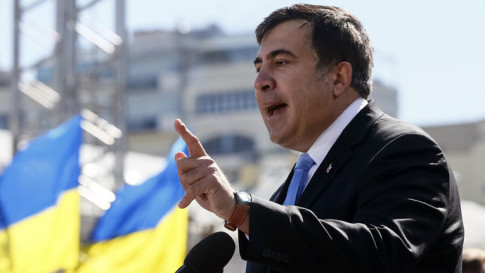 Georgia’s former President Mikhail Saakashvili, wanted by his country’s prosecutors for embezzlement, abuse of power and politically-motivated attacks, has been appointed governor of Ukraine’s Odessa region.

President Petro Poroshenko personally appointed Saakashvili to the post, saying the former Georgian leader is “a friend of Ukraine.” In a statement at Saakashvili’s nomination in Odessa, Poroshenko said the two had known each other for 25 years, since university days.

According to Poroshenko, Saakashvili “has proven with deeds, not words that he can not only give birth to creative ideas, but also put them into practice.” He added Georgia’s ex-president had changed his country “in the direction of transparency, effectiveness, anti-corruption, appeal for foreign investors, fair justice, protection of citizen’s rights, democracy,” something Poroshenko “would like to see very much” in Odessa.

– Poroshenko Threatens To Declare Martial Law In Ukraine Within Hours “To Demonstrate Readiness For War” (ZeroHedge, May 28, 2015):

In the case of any advance of Ukrainian army positions – and who is to say whether there is or not – Ukraine’s President Poroshenko says he will declare martial law across his country within hours. As RT reports, Poroshenko added that Ukraine will “demonstrate its readiness for war, for victory, for defense and for peace.”

For martial law to be enacted, the parliament has to approve a corresponding ruling by the Ukrainian president. It can be declared in the whole country or selected regions. And as RT reports,

OK, so somebody hand Porkoshenko a rifle and tell him that he will have to fight Russia on the front line then …

… and then let’s see how that will immediately change his rhetoric. 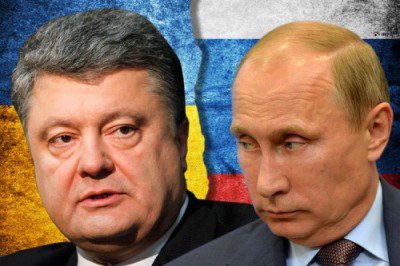 In an inflammatory statement to the BBC yesterday, Ukrainian President Petro Poroshenko declared that his regime, which enjoys political and military support from Washington and the European Union (EU), is at war with Russia.

“Can I be absolutely clear with you, this is not a fight with Russian-backed separatists, this is a real war with Russia,” Poroshenko said. He added that he expected renewed fighting in regions of east Ukraine held by pro-Russian separatist forces in the coming days.

Read morePoroshenko Says Ukraine Is At War With Russia 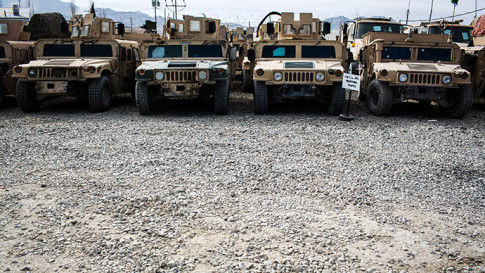 – US To Send Drones, Humvees To Ukraine, Boost Russia Sanctions As Moscow May “Deploy Nuclear Weapons In Crimea” (ZeroHedge, March 11, 2015):

So much for the second Minsk ceasefire. A few hours ago, the US returned to its strategy of escalating Russian “costs” when it placed sanctions on eight Ukrainian separatists and a Russian bank, warning that recent attacks by rebels armed by Russia violated a European-brokered ceasefire in the war-torn country. The Russian response to the latest sanction pending, but the response may have been hinted at earlier today when an official from Russia’s Foreign Ministery said the nation has the right to deploy nuclear arms in the Black Sea peninsula of Crimea. And finally, indicating that the semi-hot escalation between the US and Russia is close to getting out of control, Vice President Biden told Ukraine’s president Wednesday the U.S. will send more aid to the country, which U.S. officials said will include small drones and armored Humvees.

Secretary of State John Kerry confirmed US was to send Ukraine more non-lethal military aid, including drones and armored Humvees.

“We are today providing immediately some 75 million dollars of additional non-lethal assistance, immediately, to Ukraine in order to help them in non-lethal assistance,” Kerry told the Senate on Wednesday afternoon during a hearing concerning a proposed war powers act offered by the White House. “And, as you know, other things are currently under consideration.”

The aid has been discussed on the phone by Vice President Joe Biden and Ukrainian President Petro Poroshenkoduring a phone call, according to US officials, AP reported.