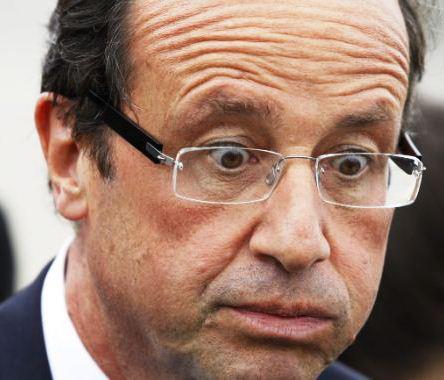 Filed under ‘what the f##k?’, French President Francois Hollande is preparing for air strikes in Syria in a somewhat mind-numbing approach to to stem a flood of refugees from the Middle East into Europe. Using the always-ready excuse of “grappling with the threat of terrorism,” Bloomberg reports Hollande’s response to Europe’s biggest refugee crisis since World War II by increasing the bombing of the very place from which the refugees are fleeing…

As Bloomberg reports, France is preparing for air strikes in Syria as President Francois Hollande seeks ways both to stem a flood of refugees from  the Middle East into Europe and grapple with the threat of terrorism.

Hollande is seeking a response to Europe’s biggest refugee crisis since World War II in tune with public opinion that remains largely hostile to a massive increase in immigration.

“I’ve asked the minister of defense to begin reconnaissance flights over Syria from tomorrow that would allow for strikes against the Islamic State,” Hollande said at a press conference in Paris on Monday. Hollande, who ruled out sending troops, said Syrian leader Bashar al-Assad is an impediment to peace in the country.

France has warplanes in Abu Dhabi and at a Jordanian air force base.

“These will be reconnaissance and intelligence flights,” Hollande said. “We want to know where the training and command sites are.”

German Chancellor Angela Merkel announced 6 billion euros ($6.7 billion) to help the thousands of migrants pouring into the country. Hollande said today that France will accept 24,000 refugees over two years. He estimates that there are 60,000 asylum seekers in France in 2015.

Hollande also called for “massive” aid to support camps in countries neighboring Syria so that refugees can stay as close as possible to home.

“Let’s face reality,” he said. There are four million refugees in camps in countries such as Jordan and Turkey and “if we want to avoid an exodus, what we have to do is supply massive aid” so that “these people can stay as close as possible to the country from which they are fleeing.”

Maybe it’s our cynicism shining through once again but does this not have the smell of the “Syrian Chemical warfare YouTube clips” debacle… Flood Europe with Syrian refugees, drowned children as collateral damage, gain empathy points with the media blaming it all on Assad once again… and enabling more airstrikes, military equipment, and devastation to be unleashed.