GARMISCH-PARTENKIRCHEN, Germany (AP) — Thousands of demonstrators packed a German Alpine resort town on Saturday to protest a wide range of causes, from climate change to free trade, before the arrival of the leaders of the Group of Seven industrialized democracies for a two-day summit.

Though the demonstration in Garmisch-Partenkirchen was largely peaceful, a small group of protesters clashed with police as they marched through the town, charging at officers who responded with pepper spray. At least two protesters had to be taken away by medics for treatment. Police said one officer was also injured by the pepper spray; there were no arrests.

And what about Fukushima??? 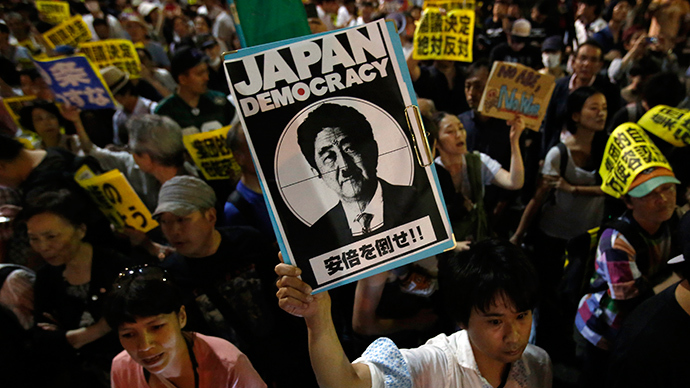 Thousands gathered outside the Japanese prime minister’s office to protest constitutional changes that would expand Japan’s military role and allow overseas deployment. It comes one day after a man set himself on fire in protest against a proposed law.

Protest organizers have estimated that 10,000 people – including students, pensioners, and women – attended the rally outside Prime Minister Shinzo Abe’s office in Tokyo. However, police put the number of participants at “several thousand.”

The demonstration comes on the eve of a cabinet meeting, where lawmakers are expected to endorse a resolution that would expand the use of Japan’s military by reforming the constitution.

Under Article 9 of its post-war pacifist constitution, Japan is blocked from the use of force to resolve conflicts except in the case of self-defense; but, as The BBC reports, Japan’s Prime Minister Shinzo Abe says he wants a new interpretation of the constitution to be agreed on. This has brought major protests in Japan, climaxing this weekend when a man set himself on fire in central Tokyo in protest at a proposed law which could allow Japan to deploy its military overseas. With stocks falling, JPY strengthening, an economy collapsing, and a surging disapproval rating, it seems Abe needs a 4th arrow – war?

Kiev, Ukraine (CNN) — They’ve given up their ground before — voluntarily, as a political concession. But that seems to be over.

After the deaths of 25 people in clashes a day earlier, Ukrainian protesters are prepared to stand and fight again Wednesday.

Police want to clear them out of central Kiev. Some of them died trying to stay put Tuesday — using projectiles and burning barricades to keep security forces at bay at Kiev’s Maidan, or Independence Square.

– This Is How Ukrainian Protesters Attack An Armored Personnel Carrier (ZeroHedge, Feb 18, 2014):

Watch as sparks fly between a Ukrainian military APC, possibly the same one we revealed earlier, as it gets into some blazingly close encounters with the Kiev protesters. It is unclear who won however it is quite clear that at this point the proxy war in Ukraine between Russia/Gazprom and the European Union/US State Dept/Saudi/Qatar can be upgraded to “hot.”

And the death and injury toll, which is rising by the hour:

Things have gotten a bit feisty in the Spanish city of Burgos, where violent protests have emerged in recent days over the decision to reduce the size of a road by half. It seems the protestors made a special point to vent their anger at a branch of Spanish bank Santander.

Don’t worry though, everything’s just fine. Nothing to see here serfs, move along. Recovery is proceeding as planned.

Thailand’s Finance Ministry has been taken over by more than 1,000 anti-government rioters, Reuters reported witnesses as saying. The leader of the protest movement has urged the demonstrators to seize other government buildings.

Across the city, around 30,000 protesters chanted “Get out!” and spread out across Bangkok to besiege government offices, military and naval bases and state TV channels.

Protest leaders estimated that at least 1 million anti-government protesters would gather near Democracy Monument for an organized march through the city. Latest police estimates showed that some 200,000 people have gathered on the streets, the biggest rally in three years. 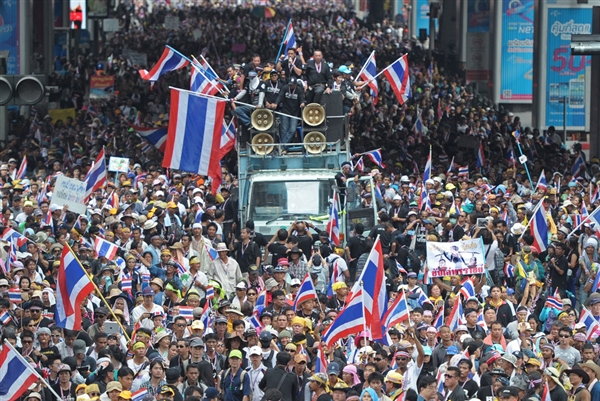 About 1,000 anti-government demonstrators forced their way into Thailand’s Finance Ministry on Monday and protest leaders called for the occupation of other government buildings in an escalating bid to topple Prime Minister Yingluck Shinawatra.

The swiftly rising political tension came as more than 30,000 demonstrators marched to 13 areas across the city, raising the risk of a clash with police, a day after about 100,000 gathered in the city’s historic quarter.

The protesters, led by the opposition Democrat Party, say Yingluck has become a puppet for her brother, former Prime Minister Thaksin Shinawatra, who was ousted in a 2006 military coup and convicted of graft two years later — charges that he says were politically motivated.

PHUKET: The hundreds of thousands of protesters in Bangkok’s streets will target television channels, the military and police today as concerns grow about Thailand’s future.

The decision to march on the media outlets turns the massive but peaceful street revolt in an unpredictable and potentially dangerous direction.

Many countries have issued travel advisories telling tourists to avoid the crowds in Bangkok. Today, with hundreds of thousands of people surging through the capital, those warnings are likely to become stronger.

Splintering the anti-government disturbance – by most estimates the protest brought between 500,000 and one million onto Bangkok’s streets on Sunday – leaves police in Bangkok being forced to deal with incidents on-the-run.

The protesters aim to topple the ”Thaksin Shinawatra regime” and end the corruption and nepotism now widely acknowledged under his government and subsequent ”Red” governments.

However, many previous ”Red” supporters have gone over to the traditionally ”Yellow” opposition, blurring color lines and leaving the government of Thaksin’s sister Yingluck, the present Prime Minister, increasingly exposed and liable to collapse at any moment.

Thirteen organisations and businesses have been nominated as the protesters’ targets today.

The media is being targetted for showing allegiance to the government. Protesters say figures revealing the true large scale of the demonstration have been suppressed and footage has been screened sparingly, if at all.

Anti-government protesters forced their way into Thailand’s Finance Ministry on Monday, laying out sleeping mats in its rooms and hallways in an escalating bid to overthrow Prime Minister Yingluck Shinawatra.

They also broke into the compound of the Foreign Ministry, a Reuters witness said.

The seizing of government buildings by protesters led by the opposition Democrat Party thrusts Thailand into a new chapter of political volatility three years after it was convulsed by its bloodiest political unrest in a generation.

The protesters say Yingluck is a puppet of her brother, former Prime Minister Thaksin Shinawatra, who was ousted in a 2006 military coup and convicted two years later of graft – charges that he denies. Thaksin lives in self-imposed exile but exerts enormous influence over his sister’s government.