It continues to go from bad to worse for Africa’s “deadliest ever” Ebola epidemic which has officially claimed well over 600 lives, and unofficially many more.

Following the death of a Liberian government worker two days ago who collapsed in the international airport of Nigeria’s 20-million megacity, Lagos which resulted in a “red alert” Nigeria clamping down into a quasi-quarantine state, sending specialists to airports and seaports fo containment, overnight we got an update on the other major Ebola story from last week, namely the female patient whose family broke her out of a hospital in Sierra Leone’s capital Freetown, and who had been on the loose of several days, leading to a nationwide hunt. She has passed away, dying in an ambulance on the way to hospital, Reuters reports.

Amadu Sisi, a senior doctor at King Harman hospital in the capital Freetown, from which the patient was taken, said on Saturday that police found her in the house of a healer. Her family refused to hand her over and a struggle ensued with police, who finally retrieved her and sent her to hospital, he said. “She died in the ambulance on the way to another hospital,” Sisi said.

Sierra Leone is now the African country with the highest number of Ebola cases, at least 454, surpassing neighboring Ginea where the outbreak allegedly originated in February. What is making things worse and is hindering the containment is that fear and mistrust of health workers in Sierra Leone, where many have more faith in traditional medicine. And over the past few days, this has culminated in crowds gathered outside clinics and hospitals to protest against what they see as a conspiracy, in some cases clashing with police as they threatened to burn down the buildings and remove the patients. 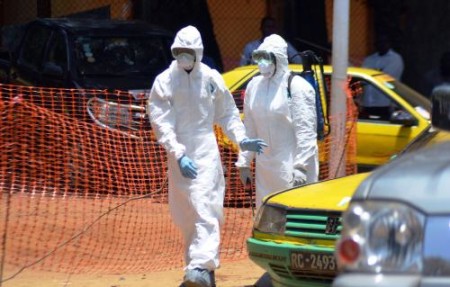 The hostility against the doctors is threatening the stability of the country itself:

Police were guarding the country’s main Ebola hospital in Kenema in the West African country’s remote east on Saturday, where dozens are receiving treatment for the virus.

Thousands had gathered outside the clinic the day before, threatening to burn it down and remove the patients. Residents said police fired tear gas to disperse the crowds and that a 9-year-old boy was shot in the leg by a police bullet.

Assistant Inspector General Alfred Karrow-Kamara said on Saturday the protest was sparked by a former nurse who had told a crowd at a nearby fish market that “Ebola was unreal and a gimmick aimed at carrying out cannibalistic rituals”.

He said calm had been restored to Kenema on Saturday, adding that a strong armed police presence was in place around the clinic and the local police station.

Some health workers from the clinic have been reported absent from work because of “misconceptions by some members of the community,” according to a local doctor.

It has gotten so serious, even the country’s president has had to intervene: President Ernest Bai Koroma said on Saturday the government planned to “intensify activities and interventions in containing the disease and stopping it spread” with a view to ending the disease within 60 to 90 days.

And while the US public has been generally unaware of the severity of the breakout, this may soon change following news that a 33-year-old US doctor working for relief organization Samaritan’s Purse in Liberia was the latest to test positive for the disease on Saturday. Telegraph reports:

The charity Samaritan’s Purse issued a news release Saturday saying Dr Kent Brantly was being treated at a hospital in Monrovia, the capital. DR Brantly had been serving as medical director for the aid organisation’s case management centre there.

Photos of Dr Brantly working in Liberia show him in white coveralls made of a synthetic material that he wore for hours a day while treating Ebola patients.

Brantly was quoted in a posting on the organization’s website earlier this year about efforts to maintain an isolation ward for patients.

“The hospital is taking great effort to be prepared,” Dr Brantly said. “In past Ebola outbreaks, many of the casualties have been healthcare workers who contracted the disease through their work caring for infected individuals.”

Dr. Kent Brantly (right) with colleagues Stephen Snell (left) and an unidentified doctor at center in a Facebook photo posted May 25, 2013 (via NYDailyNews) 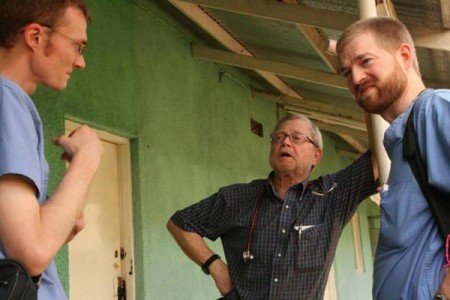 Kent Brantley pictured with his wife and children: 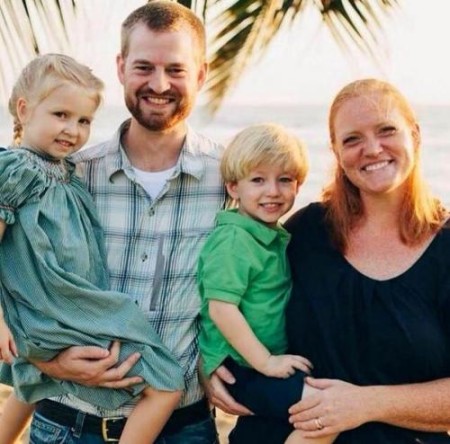 And a picture of the infected doctor wearing full protective garb (left) treating an infected patient: 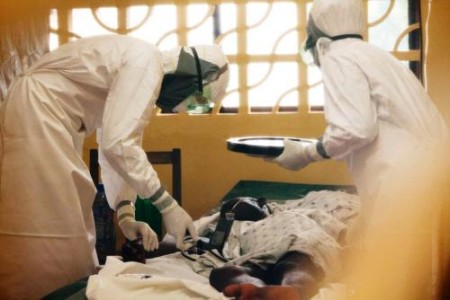 Is Dr Brantly’s infection a possible link to bring the African epidemic into the US? Unlikely, but his family is an open question: “Samaritan’s Purse spokeswoman Melissa Strickland says Dr Brantly’s wife and children had been living with him in Africa but are currently in the US.”

For now, one can only hope that even as the infection appears on the verge of breaking out of its west-African containment, that the local authorities will somehow magically prevent further spreading of the epidemic whose mortality rate is between 60% and 90%.