An earthquake in Papua New Guinea rattled ExxonMobil’s gas project on the island nation to the tune of $19 billion, and a backlash against the U.S. company’s activities is becoming more difficult to contain.

A group of locals are blaming the activities of Exxon and its local partners for the 7.5-magnitude earthquake that hit the island on February 26. Aftershocks after the initial quake compounded the effects of the natural disaster.

The project, known as PNG LNG, is recognized as one of the world’s most successful liquefied natural gas projects, but the foreign presence is becoming more and more unpopular amongst locals. The country’s Vice Minister for Petroleum and Energy, Manasseh Makiba told Reuters that Exxon should open an official inquiry to identify the causes of the aftershocks to address the locals’ concerns.

How irrelevant and desperate has the #ExxonKnew campaign become? Well, they’re now claiming that global warming caused the 1989 Exxon Valdez spill, and that Exxon should have known it would happen. The claims were made in yet another article written by graduate students at the Columbia Journalism School, which was published today in the Los Angeles Times.

The article – fit more for The Onion than the LA Times – claims that ExxonMobil had evidence that the Columbia Glacier was calving due to climate change, but allowed one of its tankers to put itself in the way of the icebergs anyway.

Anyone who has ever followed the story knows that the only ice responsible for the Exxon Valdez spill would be the ice cooling the captain’s many cocktails that night. But for anti-Exxon campaigners, no alternate theories (or should we say alternative facts?) are too outrageous to publish.

– There have been only two periods in the past 600 million years when it has been colder than today – Additionally, CO2 levels are very low 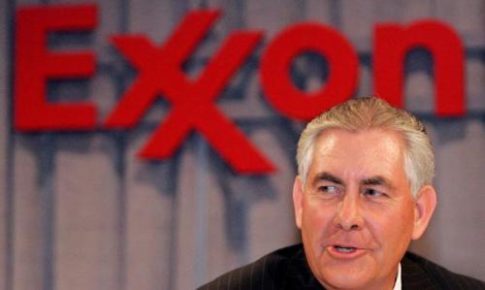 Read moreRex Tillerson To Sever All Ties With Exxon, Will Receive $182 Million

With Exxon Mobil sliding after earnings, Amazon’s market cap – for the first time ever – is now larger than the oil giant. Next stop AAPL…

– For The First Time Since The Great Depression, Exxon Mobil Loses ‘AAA’ Rating:

Exxon Mobil has been rate AAA by S&P since 1930 according to Bloomberg. Today that ended as the global crude explorer with sales that dwarf the economies of most nations was cut to AA+ (Outlook stable). Having been put on notice in February (negative watch), citing concern that credit measures would remain weak through 2018. XOM stock is sliding and weighing on The Dow (back below 18,000).

Last May, when the Obama administration was furiously cracking down on the Kremlin in the aftermath of the CIA-backed Ukraine presidential coup and the resulting “territorial expansion” by Russia which promptly took over the Crimea peninsula (and is on its way to annexing the Donetsk republic) with attempts to “isolate” Russia, one prominent US company dared to defy the White House embargo and extended its partnership with Moscow.

This is what we posted last May: “Several of the largest oil companies in the world are doubling down in Russia despite moves by the West to isolate Russia and its economy. ExxonMobil and BP separately signed agreements with Rosneft – Russia’s state-owned oil company – to extend and deepen their relationships for energy exploration. The U.S. slapped sanctions on Rosneft’s CEO Igor Sechin in late April, freezing his assets and preventing him from obtaining visas.

– How Lobbyists for Monsanto, Exxon Mobil, Microsoft and the Telecom Industry are Bundling Funds for Hillary (Liberty Blitzkrieg, July 21, 2015):

The pantsuit revolutionary is at it again. Once again demonstrating her populist chops by employing the services of lobbyists to bundle millions in campaign funds. It’s no wonder opinion polls on her have been plunging as of late.