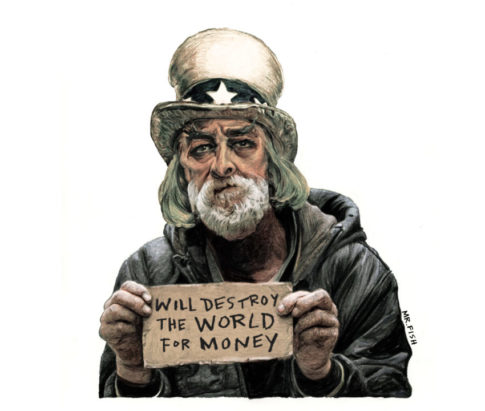 – The End of Empire:

The American empire is coming to an end. The U.S. economy is being drained by wars in the Middle East and vast military expansion around the globe. It is burdened by growing deficits, along with the devastating effects of deindustrialization and global trade agreements. Our democracy has been captured and destroyed by corporations that steadily demand more tax cuts, more deregulation and impunity from prosecution for massive acts of financial fraud, all the while looting trillions from the U.S. treasury in the form of bailouts. The nation has lost the power and respect needed to induce allies in Europe, Latin America, Asia and Africa to do its bidding. Add to this the mounting destruction caused by climate change and you have a recipe for an emerging dystopia. Overseeing this descent at the highest levels of the federal and state governments is a motley collection of imbeciles, con artists, thieves, opportunists and warmongering generals. And to be clear, I am speaking about Democrats, too.

The empire will limp along, steadily losing influence until the dollar is dropped as the world’s reserve currency, plunging the United States into a crippling depression and instantly forcing a massive contraction of its military machine.

– The Silencing Of Dissent:

The ruling elites, who grasp that the reigning ideology of global corporate capitalism and imperial expansion no longer has moral or intellectual credibility, have mounted a campaign to shut down the platforms given to their critics. The attacks within this campaign include blacklisting, censorship and slandering dissidents as foreign agents for Russia and purveyors of “fake news.”

No dominant class can long retain control when the credibility of the ideas that justify its existence evaporates. It is forced, at that point, to resort to crude forms of coercion, intimidation and censorship. This ideological collapse in the United States has transformed those of us who attack the corporate state into a potent threat, not because we reach large numbers of people, and certainly not because we spread Russian propaganda, but because the elites no longer have a plausible counterargument. 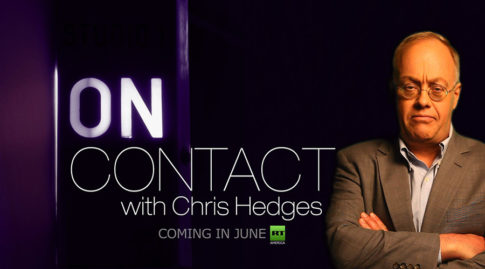 A Pulitzer Prize-winning journalist is joining the RT America team. Author and social critic Chris Hedges will host a weekly interview show called ‘On Contact,’ which will air “dissident voices” currently missing from the mainstream media.

Hedges will interview the black sheep of the establishment, leading discussions that can’t be heard anywhere else.

– Obama Explains Why ‘The Greatest Corporate Power Grab In History’ Is “The Right Thing For America”:

As president, my top priority is to grow our economy and strengthen the middle class. When I took office, America was in the middle of the worst recession since the Great Depression — but thanks to the hard work and resilience of the American people, our businesses have created 13.5 million jobs over the past 68 months, the longest streak of private-sector job creation in history. The unemployment rate has been cut nearly in half — lower than it’s been in more than seven years. We have come back further and faster from recession than nearly every other advanced nation on Earth.

That’s real progress. But as any middle-class family will tell you, we have more to do. That’s why I believe the Trans-Pacific Partnership is so important. It’s a trade deal that helps working families get ahead.

There is more truth about American journalism in the film “Kill the Messenger,” which chronicles the mainstream media’s discrediting of the work of the investigative journalist Gary Webb, than there is in the movie “All the President’s Men,” which celebrates the exploits of the reporters who uncovered the Watergate scandal.

The mass media blindly support the ideology of corporate capitalism. They laud and promote the myth of American democracy – even as we are stripped of civil liberties and money replaces the vote. They pay deference to the leaders on Wall Street and in Washington, no matter how perfidious their crimes. They slavishly venerate the military and law enforcement in the name of patriotism. They select the specialists and experts, almost always drawn from the centers of power, to interpret reality and explain policy. They usually rely on press releases, written by corporations, for their news. And they fill most of their news holes with celebrity gossip, lifestyle stories, sports and trivia. The role of the mass media is to entertain or to parrot official propaganda to the masses. The corporations, which own the press, hire journalists willing to be courtiers to the elites, and they promote them as celebrities. These journalistic courtiers, who can earn millions of dollars, are invited into the inner circles of power. They are, as John Ralston Saul writes, hedonists of power.

Read moreChris Hedges: The Myth Of The Free Press

Update: On May 19 Cecily McMillan was sentenced to three months in jail and five years of probation, plus community service. Click on the word Guardian and the words Huffington Post to see articles on the sentencing.

RIKERS ISLAND, N.Y.—Cecily McMillan, the Occupy activist who on Monday morning will appear before a criminal court in New York City to be sentenced to up to seven years on a charge of assaulting a police officer, sat in a plastic chair wearing a baggy, oversized gray jumpsuit, cheap brown plastic sandals and horn-rim glasses. Other women, also dressed in prison-issued gray jumpsuits, sat nearby in the narrow, concrete-walled visitation room clutching their children, tears streaming down their faces. The children, bewildered, had their arms wrapped tightly around their mothers’ necks. It looked like the disaster scene it was.