American constitutional experts say that Obama is worse than Nixon.

The Obama administration has prosecuted more whistleblowers than all other presidents combined.

And it goes out of its way to smear whistleblowers, threaten reporters who discuss whistleblower information and harass honest analysts.

Journalism is not only being criminalized in America, but investigative reporting is actually treated like terrorism. 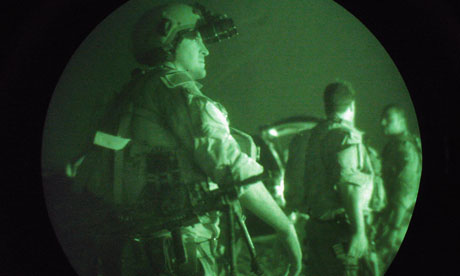 US Navy Seals on a night mission in the Middle East. Seal Team 6, which killed Osama bin Laden, is a secret elite unit that works closely with the CIA. Photograph: John Moore/Getty Images

The film Dirty Wars, which premiered at Sundance, can be viewed, as Amy Goodman sees it, as an important narrative of excesses in the global “war on terror”. It is also a record of something scary for those of us at home – and uncovers the biggest story, I would say, in our nation’s contemporary history.

Though they wisely refrain from drawing inferences, Scahill and Rowley have uncovered the facts of a new unaccountable power in America and the world that has the potential to shape domestic and international events in an unprecedented way. The film tracks the Joint Special Operations Command (JSoc), a network of highly-trained, completely unaccountable US assassins, armed with ever-expanding “kill lists”. It was JSoc that ran the operation behind the Navy Seal team six that killed bin Laden.

Drones on domestic surveillance duties are already deployed by police and corporations. In time, they will likely be weaponised 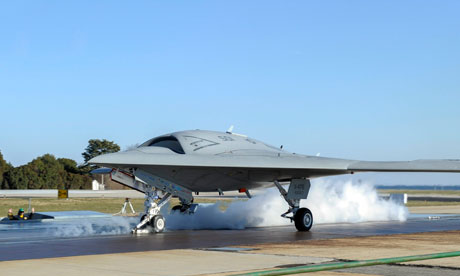 By 2020, it is estimated that as many as 30,000 drones will be in use in US domestic airspace. Photograph: US navy/Reuters

People often ask me, in terms of my argument about “ten steps” that mark the descent to a police state or closed society, at what stage we are. I am sorry to say that with the importation of what will be tens of thousands of drones, by both US military and by commercial interests, into US airspace, with a specific mandate to engage in surveillance and with the capacity for weaponization – which is due to begin in earnest at the start of the new year – it means that the police state is now officially here.

In February of this year, Congress passed the FAA Reauthorization Act, with its provision to deploy fleets of drones domestically. Jennifer Lynch, an attorney at the Electronic Frontier Foundation, notes that this followed a major lobbying effort, “a huge push by […] the defense sector” to promote the use of drones in American skies: 30,000 of them are expected to be in use by 2020, some as small as hummingbirds – meaning that you won’t necessarily see them, tracking your meeting with your fellow-activists, with your accountant or your congressman, or filming your cruising the bars or your assignation with your lover, as its video-gathering whirs. 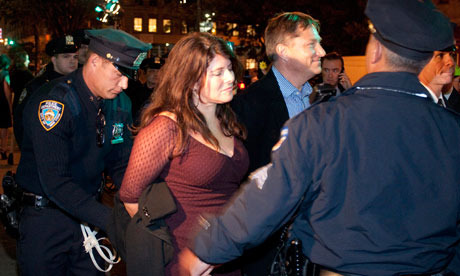 Naomi Wolf, the celebrated feminist author and campaigner, has been arrested at an Occupy Wall Street protest outside an awards ceremony held to honour New York’s governor.

Wolf and a companion were led away in handcuffs from the street in front of Skylight Studios in Manhattan.