Since the 2006 coup that toppled his autocratic regime, Thaksin has been represented by US corporate-financier elites via their lobbying firms including, Kenneth Adelman of the Edelman PR firm (Freedom House, International Crisis Group, PNAC), James Baker of Baker Botts (CFR), Robert Blackwill of Barbour Griffith & Rogers (CFR), Kobre & Kim, and currently Robert Amsterdam of Amsterdam & Peroff (Chatham House). Meanwhile, his “red shirts” UDD street mobs have received rhetorical support by US-funded NGOs like Prachatai which has recently been exposed as almost exclusively funded by the US government through the National Endowment for Democracy, USAID, George Soros’ Open Society Institute, and a myriad of other globalist foundations.

Quite obviously, the UDD, Thaksin, and Prachatai, all now confirmed to be consorting with, funded, and supported by the US government via its subversive National Endowment for Democracy and the Fortune 500 corporate-fascists that direct them, are most certainly not pursing “democracy.” Beyond high treason, and literally selling out one’s country, there is no explanation as to why the UDD would consult with the US-ASEAN Business Council comprised entirely of Fortune 500 corporations, over “concerns on the prospect of [a] coup, and [their] deep desire to see elections that are free and fair.”

Thai people have been lied to, they have been lied to big. The letter posted below has been taken directly from the “Red Shirts for Democracy” blog and now explains fully why the Thai government has been jailing what disingenuous, US-funded propagandists like Prachatai have been portraying as “political prisoners.” Clearly, they are not “political prisoners” but traitors in every sense of the term, openly, even proudly consorting with foreign corporate-financier interests in exchange for backing and support to return Thaksin Shinawatra to power at the expense of Thailand’s national, political, cultural, and economic sovereignty. More egregious is that they do so under the disingenuous guise of promoting democracy, human rights, and freedom.

The recent scandalous Thai elections where Thaksin’s own sister came to power, hand-picked by him to run openly as his proxy (as he remains abroad evading a two-year jail sentence) has been jealously defended as a sweeping democratic mandate by the Western corporate-media. Such overt duplicity on the part of the Western media, coupled by stern warnings from the CFR and the Economist for Thailand to accept the election results, along with a concerted effort by the mainstream media to leverage Wikileaks cables to undermine Thailand’s establishment, all serve as the obvious manifestation of the support UDD leaders were in Washington securing last April.

Below is a signed confession that UDD’s Sunai Chulapongsatorn, Tanet Charoenmuang, and Jaran Ditapichai traveled to Washington D.C. and openly consorted with the notorious National Endowment for Democracy and America’s largest corporations for support in their bid to return their ousted criminal leader, Thaksin Shinawatra to power. The results of this treason can expect to look like a similar US-backed “pro-democracy movement” in Egypt where John McCain, flanked by corporate magnates, prepare to squat on Egypt and plunge their parasitic probosces into the Egyptian economy. 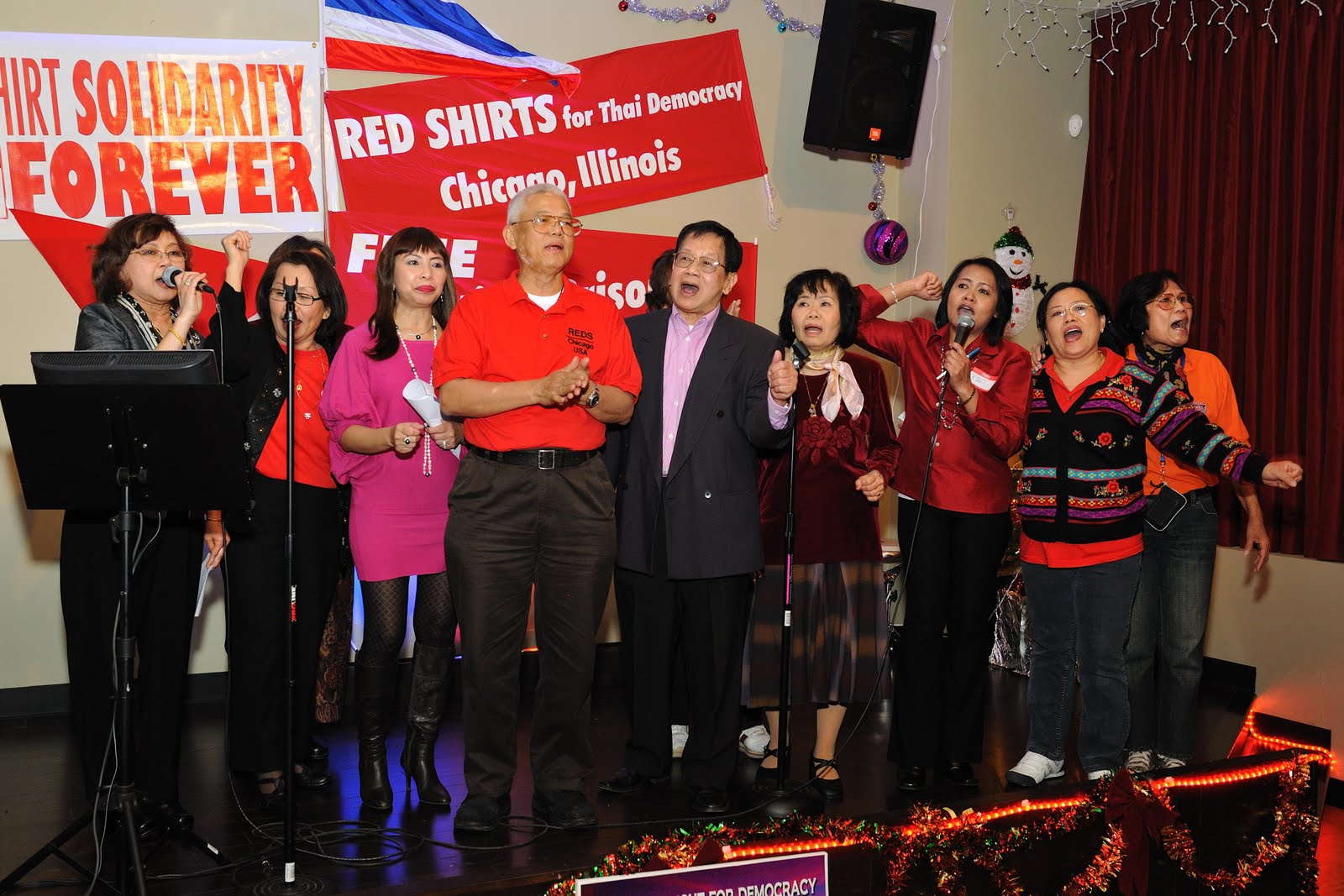 Union for Thai Democracy Chicago, Illinois U.S.A.
April 26, 2011
Dear Red Shirt Brothers and Sisters, and Friends of Thai Democracy:Please take this letter as an urgent appeal for your help in Lobbying, Campaigning the governments throughout the world NOT TO RECOGNIZE the Coup Government, should there be one. We believe this is a strong possibility.

This prospect scares the ruling elite in many concrete ways. Sins, including massacre have been committed by the military and the ruling elite. They are riding a tiger and cannot back down. The Red Shirts and pro-democracy movement are likely to be targeted.

Couple with these — there are signs of wide spread intimidation of pro-democracy movement with threats. The military showdown in the past week may not be about Dr. Somsak Jeamteerasakul or those alleged critics of Les Majeste Laws or anti-monarchy movement. It could be a show of forces in preparation for a much more serious matter.

The clashes at the border in the past week are not about the conflict with Cambodia. It appears to be part of the plan for a serious domestic situation. Red Shirts radio stations also have been raided.

The rumors of coup are widespread, but for what purposes — because the prospect of former PM Thaksin returning when Pheu Thai wins; this would create trouble for the military top brass including Tharit Phendit; Succession issues?

One thing we know, we cannot afford to see more regression of Thai politics. We urge you to form Lobbying and Campaigning groups throughout the world to do what you can to prevent another coup.

We are happy to report that while visiting Washington DC this past week with Dr. Sunai Chulapongsatorn, Dr. Tanet Charoenmuang, and Dr. Jaran Ditapichai; we had opportunities to meet Human Rights Watch, National Democratic Institute for International Affairs (NDI), National Endowment for Democracy (NED), and the U.S. – ASEAN Business Council. We discussed a wide range of issues. Most dear to us, we expressed our concerns on the prospect of coup, and our deep desire to see elections that are free and fair.

The world knows now that in the age of Globalization, only true democracy can ensure stability. The old model of supporting dictatorship and/or absolute monarchy for stability is obsolete.

Dear Brothers and Sisters, there is no time to waste. We need to educate the public and the government sectors in your countries now.

Please join force with Red Shirts in America to say NO TO COUP; NO TO MILITARY DICTATORSHIP; YES TO ELECTIONS.

We know it is not easy but if we work together, we can achieve it. We thank you for your time and your kind consideration.

The Thai translation can also be found here