Looking where Nibiru is right now? Possibly the only place from which you can really see it (until it is almost too late). 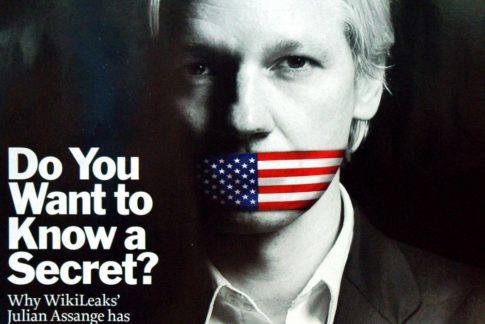 The following tweets posted by WikiLeaks yesterday set off a massive bout of speculation over the fate of Julian Assange who has been holed up in the Ecuadorian embassy in London for nearly 4 years.  There has been much speculation that the sudden change in support for Assange from the Ecuadorian government was prompted by political leverage being asserted by the Obama administration to thwart the release of emails that are proving to be very damaging to the Hillary presidential campaign.

Julian Assange’s internet link has been intentionally severed by a state party. We have activated the appropriate contingency plans.

Now, just this morning, WikiLeaks sent the following tweet, quoting “multiple US sources,” saying that, in fact, John Kerry personally asked the Ecuadorian government to shut down Assange and his leaks of Clinton’s emails.

It will likely not come as a surprise that just one day after George Soros slammed Russian president Putin for “heinous crimes against humanity“, giving the greenlight to the media and policymakers to follow suit, moments ago the paragon of non-interventionist foreign policy, US Secretary of State John Kerry, said that Russia and Syria should face a war crimes investigation for their attacks on Syrian civilians.

When making the statement, Kerry alleged that Syrian forces struck another hospital overnight, killing 20 people and wounding 100, adding that Russia and Syria owe the world “more than an explanation” about why they keep hitting hospitals and women and children.

“Russia and the regime owe the world more than an explanation about why they keep hitting hospitals, medical facilities, children, women,” Kerry said after meeting with the French Foreign Minister Jean-Marc Ayrault on Friday. “These are acts that beg for an appropriate investigation of war crimes.”

In the latest, and most dramatic – if perhaps entertaining – escalation of diplomacy between the US and Russian, earlier today Secretary of State John Kerry threatened to cut off all contacts with Moscow over Syria, unless Russian and Syrian government attacks on Aleppo end. Kerry issued the ultimatum in a Wednesday telephone call to Russian Foreign Minister Sergey Lavrov. Kerry told Lavrov the U.S. was preparing to “suspend U.S.-Russia bilateral engagement on Syria,” including on a proposed counterterrorism partnership, “unless Russia takes immediate steps to end the assault on Aleppo” and restore a cease-fire.

Excellent reporting from Ethan Barton at The Daily Caller.

Good thing the taxpayers paid for John Kerry’s daughter’s venture because he’s only ‘worth’ $300 million himself. (Officially. It’s probably a lot more.)

(From The Daily Caller)

More than $9 million of Department of State money has been funneled through the Peace Corps to a nonprofit foundation started and run by Secretary of State John Kerry’s daughter, documents obtained by The Daily Caller News Foundation show.

– US Won’t Release Text Of Secret Deal With Russia To Bomb Syria:

“At one point we’re going to be asked to support in greater detail this Russo-U.S. plan, so to do that we will need to have all the information,”

France is calling on the United States to share details of a deal it struck with Russia on Syria, saying the information—pertaining to a temporary cease-fire followed by joint airstrikes on militants—crucial to ensure extremists and not mainstream rebels are targeted. However, Washington refuses, with a State Department spokesperson saying there are “legitimate concerns” that releasing the details could derail a plan.

– Thirteen hospitalized in Chicago after AC goes down:

Almost 30 U.S. Postal employees were treated Saturday morning for heat-related illnesses after the air conditioning went down in a postal office in Chicago.

Thirteen employees were hospitalized and multiple others sent home.

– Petition to remove air conditioning from all US State Property:

You know it makes sense — air conditioners are as dangerous as suicide bombers. They must be stopped. Next up, refrigerators…

Here’s a petition you can support:  Do it for the children, for the future.

Remove air conditioning from all US State Department property. 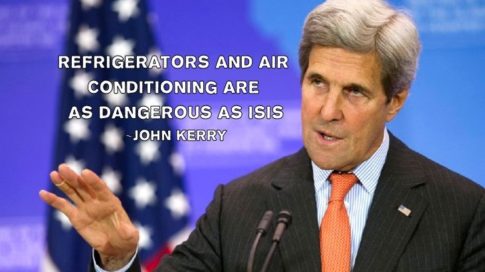 WHEREAS, Secretary of State John F. Kerry has suggested that air conditioners are as big a threat as ISIS, and

WHEREAS, it is the duty of our elected and appointed government officials to lead by example,

Read morePetition to Remove Air Conditioning From All US State Property

– Air conditioners as big a threat as ISIS, says Kerry:

With nincompoops like this in charge, I fear for civilization itself.

“Secretary of State John Kerry said in Vienna on Friday that air conditioners and refrigerators are as big of a threat to life as the threat of terrorism posed by groups like the Islamic State,” says this article.

Kerry wants to phase out hydrofluorocarbons (HFCs) from basic household and commercial appliances like air conditioners, refrigerators, and inhalers.

EPA Administrator Gina McCarthy is one of the U.S.’s lead negotiators in the discussions in Vienna, says The Washington Examiner. “She said Thursday that one of her goals is to move the HFC agreement into force by the end of the year.”