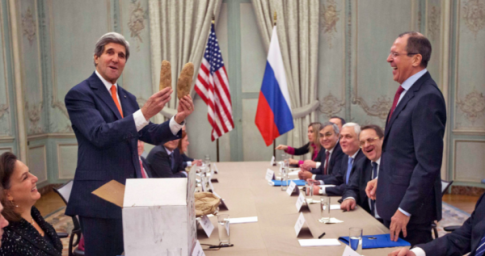 – An Exasperated John Kerry Throws In Towel On Syria: “What Do You Want Me To Do, Go To War With The Russians?!”

“Russian and Syrian forces intensified their campaign on rebel-held areas around Aleppo that are still home to around 350,000 people and aid workers have said the city – Syria’s largest before the war – could soon fall.”

Can you spot what’s wrong with that quote, from a Reuters piece out today? Here’s the problem: “could soon fall” implies that Aleppo is on the verge of succumbing to enemy forces. It’s not. It’s already in enemy hands and has been for quite some time. What Reuters should have said is this: “…could soon be liberated.”

While we’ll be the first to admit that Bashar al-Assad isn’t exactly the most benevolent leader in the history of statecraft, you can bet most Syrians wish this war had never started and if you were to ask those stranded in Aleppo what their quality of life is like now, versus what it was like in 2009, we’re fairly certain you’ll discover that residents aren’t particularly enamored with life under the mishmash of rebels that now control the city.

In any event, Russia and Iran have encircled Aleppo and once it “falls” (to quote Reuters) that’s pretty much it for the opposition. Or at least for the “moderate” opposition. And the Saudis and Turks know it.

So does John Kerry, who is desperate to restart stalled peace negotiations in Geneva. The problem for the US and its regional allies is simple: if Russia and Iran wipe out the opposition on the battlefield, there’s no need for peace talks. The Assad government will have been restored and that will be that. ISIS will still be operating in the east, but that’s a problem Moscow and Tehran will solve in short order once the country’s major urban centers are secured.

As we noted on Saturday, Riyadh and Ankara are extremely concerned that the five-year-old effort to oust Assad is about to collapse and indeed, the ground troop trial balloons have already been floated both in Saudi Arabia and in Turkey. For their part, the Russians and the Iranians have indicated their willingness to discuss a ceasefire but according to John Kerry himself, the opposition is now unwilling to come to the table.

“Don’t blame me – go and blame your opposition,’” an exasperated Kerry told aid workers on the sidelines of the Syria donor conference in London this week.

America’s top diplomat also said that the country should expect another three months of bombing that would “decimate” the opposition, according to Middle East Eye who also says that Kerry left the aid workers with “the distinct impression” that the US is abandoning efforts to support rebel fighters.

In other words, Washington has come to terms with the fact that there’s only one way out of this now. It’s either go to war with Russia and Iran or admit that this particular effort to bring about regime change in the Mid-East simply isn’t salvageable.

“He said that basically, it was the opposition that didn’t want to negotiate and didn’t want a ceasefire, and they walked away,” a second aid worker told MEE.

“‘What do you want me to do? Go to war with Russia? Is that what you want?’” the aid worker said Kerry told her.

MEE also says the US has completely abandoned the idea that Assad should step down. Now, apparently, Washington just wants Assad to stop using barrel bombs so the US can “sell the story to the public.” “A third source who claims to have served as a liaison between the Syrian and American governments over the past six months said Kerry had passed the message on to Syrian President Bashar al-Assad in October that the US did not want him to be removed,” MEE says. “The source claimed that Kerry said if Assad stopped the barrel bombs, Kerry could ‘sell the story’ to the public, the source said.”

Of course Kerry won’t be able to “sell” that story to the Saudis and the Turks, or to Qatar all of whom are now weighing their oppositions as the US throws in the towel. “Kerry’s mixed messages after the collapse of the Geneva process have put more pressure on Turkey and Saudi Arabia,” MEE concludes. “Both feel extreme unease at the potential collapse of the opposition US-recognised Free Syrian Army.”

And so, as we said earlier this week, it’s do or die time for Riyadh, Ankara, and Doha. Either this proxy war morphs into a real world war in the next two weeks, or Aleppo “falls” to Assad marking a truly humiliating defeat for US foreign policy and, more importantly, for the Saudis’ goal of establishing Sunni hegemony in the Arabian Peninsula.

The only other option is for John Kerry to face the Russians in battle. As is evident from the sources quoted above, Washington clearly does not have the nerve for that.