Advertising billboards similar to those seen in the film Minority Report, which can recognise passers-by, target them with customised adverts and even use their names, are being developed by computer engineers. 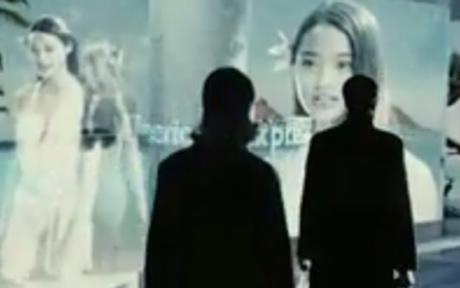 The billboards being developed by NEC, the Japanese technology, company also use facial recognition software as seen in the movie.

Researchers at IBM have revealed they are working on technology which will lead to consumers being shown tailor made adverts that reflect their personal interests.

Digital advertising screens are already appearing in train stations, on bus stops and on the sides of buildings, but currently they only show generic adverts for a handful of products.

The new advertising hoardings will behave like those in the film Minority Report, starring Tom Cruise, in which Cruise’s character is confronted with digital signs that call out his name as he walks through a futuristic shopping mall.

“John Anderton. You could use a Guinness right about now,” one billboard announces as he walks past.

IBM claims that its technology will help prevent consumers from being subjected to a barrage of irritating advertising because they will only be shown adverts for products that are relevant to them.

The system works by using the same kind of wireless technology tags found in Oyster Cards – the travel cards used on the London Underground.

These tags, which are known as RFID chips are increasingly also being incorporated into credit cards and onto mobile phones.

By encoding these chips with information about the individual, digital advertising boards could identify a person as they pass by and show them an advert according to what is known about their shopping habits and personal preferences.

Brian Innes, a research scientist at IBM’s innovation laboratories in Hursley, near Winchester, said: “In Minority Report, the billboards recognise passers-by and play adverts that are specific for the individual.

“In the film, the billboards rely on scanning the person’s eyeball, but we are using RFID technology that people are carrying around with them, so they can have a tailor made message.”

The billboards are being developed as part of IBM’s Smarter Planet programme that aims to use technology to make people’s lives easier and more efficient.

Engineers in Japan have already developed a billboard that is capable of identifying a shopper’s age and gender as they walk past to offer them products that are more accurately suited to them.

The signs, developed by Japanese electronics company NEC, use basic facial recognition software and cameras to determine if someone is male or female and their rough age range before showing an advert that matches their demographic.

The IBM system would take this a step further by allowing adverts to be shown that are specific to an individual.

Advertisers have welcomed the technology as it will help reduce costs that are passed onto the consumer by reducing the amount of poorly targeted advertising.

A spokesman for the Advertising Association, the industry body that represents advertisers, said: “Outdoor RFID advertising is an exciting prospect for the industry. Ads can be made more relevant to the consumer and it will boost interest in the medium”.