President Obama outraged food activists last week when he signed into law a spending bill with a controversial rider that critics have dubbed the “Monsanto Protection Act.” The rider says the government must allow the planting of genetically modified crops even if courts rule they pose health risks. The measure has galvanized the U.S. food justice movement, which is now preparing for its next fight when the provision expires in six months. We host a discussion on the “Monsanto Protection Act” and the safety of genetically modified foods with two guests: Gregory Jaffe, director of the Biotechnology Project at the Center for Science in the Public Interest, a nonprofit consumer advocacy organization that addresses food and nutrition issues; and Wenonah Hauter, executive director of Food & Water Watch and author of the book, “Foodopoly: The Battle Over the Future of Food and Farming in America.” On Wednesday, Hauter’s group is releasing a major new report called “Monsanto: A Corporate Profile.” [includes rush transcript]

This is a rush transcript. Copy may not be in its final form.

AARON MATÉ: President Obama outraged food activists last week when he signed into law a spending bill with a controversial rider attached. Critics have dubbed the rider the “Monsanto Protection Act.” That’s because it effectively says the government must allow the planting of genetically modified crops even if courts rule they pose health risks. The provision calls on the U.S. Department of Agriculture, the USDA, to, quote, “grant temporary permit(s) or temporary deregulation,” unquote, to the crop growers until an environmental review is completed. In other words, plant the GE crop first and assess the impact later.

AMY GOODMAN: One of the biggest supporters of the provision was Republican Senator Roy Blunt of Missouri, Monsanto’s home state. Blunt reportedly crafted the bill’s language with Monsato’s help.
On the other side was the lone member of the Senate who’s also an active farmer, Democrat Jon Tester of Montana. Senator Tester tried to remove the rider when the budget bill made its way through Congress last month. Speaking on the Senate floor, Tester said the provision would undermine judicial oversight and hurt family farmers.

SEN. JON TESTER: The United States Congress is telling the Agricultural Department that even if a court tells you that you’ve failed to follow the right process and tells you to start over, you must disregard the court’s ruling and allow the crop to be planted anyway. Not only does this ignore the constitutional idea of separation of powers, but it also lets genetically modified crops take hold across this country, even when a judge finds it violates the law—once again, agribusiness multinational corporations putting farmers as serfs. It’s a dangerous precedent. Mr. President, it will paralyze the USDA, putting the department in the middle of a battle between Congress and the courts. And the ultimate loser will be our family farmers going about their business and feeding America in the right way.

“In an outrageous betrayal of all Americans, President Obama just signed the so-called “Monsanto Protection Act” into law.

This law gives Monsanto authority over federal courts and allows it to plant experimental GMO crops even if they pose an extreme risk to human health and environmental health.” 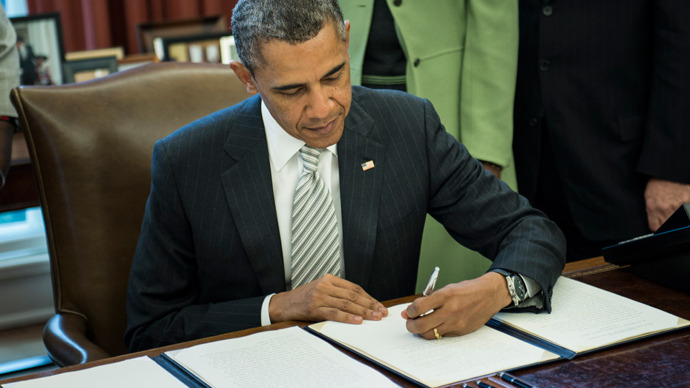 United States President Barack Obama has signed a bill into law that was written in part by the very billion-dollar corporation that will benefit directly from the legislation.

On Tuesday, Pres. Obama inked his name to H.R. 933, a continuing resolution spending bill approved in Congress days earlier. Buried 78 pages within the bill exists a provision that grossly protects biotech corporations such as the California-based Monsanto Company from litigation.