Over the weekend, in a repeat of rumors that were widespread last year, Forbes ‘reported’ about Project Chrome, a massive corporate reorganization for IBM that would see Big Blue cull over a quarter of its staff – in real terms that means over 110,000 employees, as early as next week. IBM stocks surged higher on this ‘great’ news… and then, disappointment started as “the largest corporate restructuring in history” was denied by the company…

“IBM does not comment on rumors, even ridiculous or baseless ones,” a spokesman said.

“If anyone had checked information readily available from our public earnings statements, or had simply asked us, they would know that IBM has already announced the company has just taken a $600 million charge for workforce rebalancing. This equates to several thousand people, a small fraction of what’s been reported.” 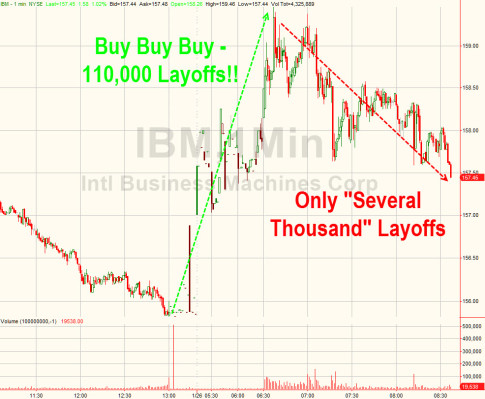