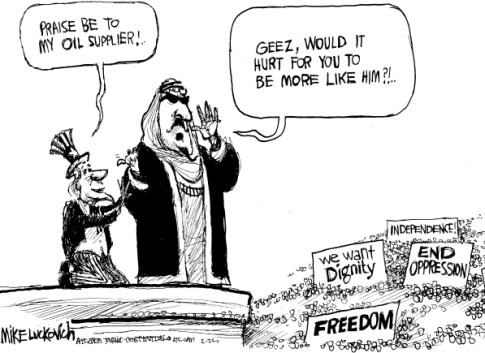 Chairman of the Joint Chiefs, General Martin Dempsey has, according to Politico, asked The National Defense University to establish an essay and research competition focused on the Middle East in honor of Saudi Arabia’s late King Abdullah. How very generous for America’s top uniformed military leader to recognize such a leader of another nation… Though no details of the prize are available, we thought we would take a stab (figuratively) at an essay...

“The writing competition will focus on issues related to the Arab-Muslim world and is intended to contribute to strategic thinking and meaningful research,” the university said in an announcement.

Dempsey called the competition “an important opportunity to honor the memory of King Abdullah bin Abdulaziz, while also fostering scholarly research on the Arab-Muslin world.”

Dempsey, President Barack Obama, Defense Secretary Chuck Hagel and other leaders offered their condolences after Abdullah’s death, calling him a key U.S. ally and a force for moderation in the oil-rich kingdom. And Obama is cutting short his trip to India Tuesday to fly to Saudi Arabia to meet with the new King Salman.

The NDU, located near Fort McNair in Southwest Washington, is a high-level graduate school for U.S. and international military leaders, Defense Department civilians and defense industry executives. Obama went there in 2013 to give a speech in which he called for scaling back or normalizing some aspects of the long-running war against terrorism and in which he acknowledged openly that the U.S. uses drones to kill terrorists overseas.

And so, here is our entry – courtesy of Liberty Blitzkrieg’s Mike Krieger,

The Saudi regime has come under severe criticism here at Liberty Blitzkrieg over the last couple of years for several reasons. First, more and more evidence has emerged concerning Saudi Arabia’s role in the attacks of 9/11. A role that both the Bush and Obama administrations have gone out of their way to conceal. In late 2013, I published a post titled, Two Congressmen Push for Release of 28-Page Document Showing Saudi Involvement in 9/11. Here are some excerpts:

But earlier this year, Reps. Walter B. Jones, R-N.C., and Stephen Lynch, D-Mass., were given access to the 28 redacted pages of the Joint Intelligence Committee Inquiry (JICI) of 9/11 issued in late 2002, which have been thought to hold some answers about the Saudi connection to the attack.

“I was absolutely shocked by what I read,” Jones told International Business Times. “What was so surprising was that those whom we thought we could trust really disappointed me. I cannot go into it any more than that. I had to sign an oath that what I read had to remain confidential. But the information I read disappointed me greatly.”

The public may soon also get to see these secret documents. Last week, Jones and Lynch introduced a resolution that urges President Obama to declassify the 28 pages, which were originally classified by President George W. Bush. It has never been fully explained why the pages were blacked out, but President Bush stated in 2003 that releasing the pages would violate national security.

While neither Jones nor Lynch would say just what is in the document, some of the information has leaked out over the years. A multitude of sources tell IBTimes, and numerous press reports over the years in Newsweek, the New York Times, CBS News and other media confirm, that the 28 pages in fact clearly portray that the Saudi government had at the very least an indirect role in supporting the terrorists responsible for the 9/11 attack. In addition, these classified pages clarify somewhat the links between the hijackers and at least one Saudi government worker living in San Diego.

Considering we have given up so many civil liberties in response to that horrible tragedy, you’d think it might be appropriate to declassify documents showing one of America’s closest allies had ties to the attacks. You’d think that, but you’d be wrong.

As if ties to the worst terrorist attack on American soil isn’t bad enough, the close alliance with such an autocratic, feudal, and oppressive monarchy makes American claims to care about democracy and human rights a complete and total undeniable fraud.

Murtaza Hussain at the Intercept had some choice words about this incredible hypocrisy:

After nearly 20 years as de facto ruler of the Kingdom of Saudi Arabia, King Abdullah ibn-Abdulaziz al-Saud died last night at the age of 90. Abdullah, who took power after his predecessor King Fahd suffered a stroke in 1995, ruled as absolute monarch of a country which protected American interests but also sowed strife and extremism throughout the Middle East and the world.

In a statement last night Senator John McCain eulogized Abdullah as “a vocal advocate for peace, speaking out against violence in the Middle East”. John Kerry described the late monarch as “a brave partner in fighting violent extremism” and “a proponent of peace”. Not to be outdone, Vice President Joe Biden released a statement mourning Abdullah and announced that he would be personally leading a presidential delegation to offer condolences on his passing.

It’s not often that the unelected leader of a country which publicly flogs dissidents and beheads people for sorcery wins such glowing praise from American officials. Even more perplexing, perhaps, have been the fawning obituaries in the mainstream press which have faithfully echoed this characterization of Abdullah as a benign and well-intentioned man of peace.

Above all, he was not a leader who shied away from both calling for and engineering more conflict in the Middle East.

In contrast to Senator McCain’s description of Abdullah as “a vocal advocate of peace”, a State Department diplomatic cable released by Wikileaks revealed him in fact directly advocating for the United States to start more wars in the region.

Personally, I’m so moved by this cruel man’s death, I want to do my part to pay tribute. I will do this by providing links demonstrating what is considered routine behavior in the House of Saud. Bear in mind, this list is by no means comprehensive, it just comprises of several heinous events I have covered.

Record Beheadings and the Mass Arrest of Christians – Is it ISIS? No it’s Saudi Arabia

We wonder what the prize is?