Christmas is approaching and those bonuses are getting bigger that way.

– The Buyback Of Things: IBM To Repurchase Another $5 Billion In Stock In Next Two Quarters (ZeroHedge, Oct 28, 2014):

When all else fails, and there is no growth, what you gonna call? Buybackbusters!

A week after IBM reported atrocious earnings, due to a variety of issues but most of all because it simply repurchased the least amount of stock in the past  quarter in years (as it was approaching the limit of its buyback authorization), Big Blue is back to doing the one thing it does well: the buyback of things, in this case revealing its board has just authorized $5 billion in stock buybacks through April 2015 which means that with the $1.4 billion still under authorization, IBM is set to purchase about $3.2 billion in Q4 2014 and Q1 2015, each. And then, in April 2015, IBM will ask for an even bigger stock buyback authorization from its board. Which, clearly, the board – whose IBM stock will promptly rise as a result – will grant.

The IBM (NYSE:IBM) board of directors today declared a regular quarterly cash dividend of $1.10 per common share, payable December 10, 2014 to stockholders of record November 10, 2014. With the payment of the December 10 dividend, IBM will have paid consecutive quarterly dividends every year since 1916.

The board today also authorized $5 billion in additional funds for use in the company’s stock repurchase program. IBM said it will repurchase shares on the open  market or in private transactions from time to time, depending on market conditions.

Ginni Rometty, IBM chairman, president and chief executive officer said, “We will continue to make the investments and changes necessary to manage our business for the long term and to shift to higher-value offerings. At the same time we remain fully committed to returning significant value to shareholders.”

The only question is whether IBM will have enough cash flow to fund these buybacks organically, or if it will need to issue even more debt. Which could be problem, because one of these days the rating agencies will finally look at the charts below and downgrade IBM to junk, thereby ending the “buyback of things” party first at IBM, and soon, at all other so-called Investment Grade companies. 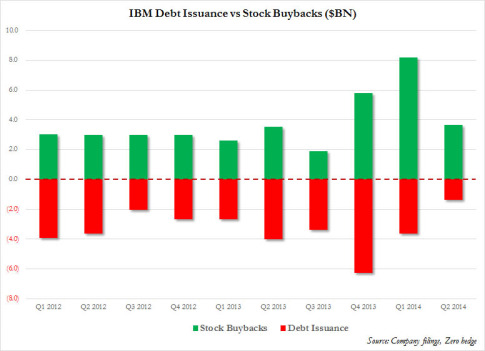 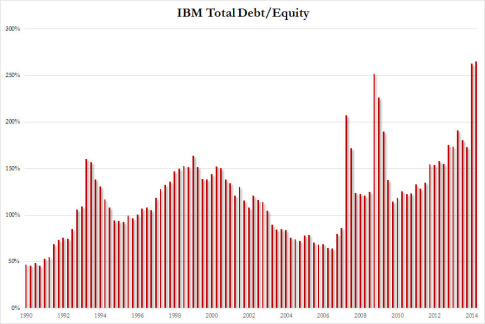 1 thought on “The Buyback Of Things: IBM To Repurchase Another $5 Billion In Stock In Next Two Quarters”