Toys “R” Us Inc., the largest US toys retailer, filed for bankruptcy late on Monday night, as a result of a crushing post-LBO debt load and relentless competition from warehouse and online retailers. With assets of $6.9 billion, it’s the second-largest retail bankruptcy, trailing the filing in 2002 by Kmart, which had $14.6 billion in assets.

– Toys “R” Us To File Bankruptcy Any Minute; Bonds Crash

It’s official – the US ‘retail apocalypse’ has moved north as Sears Canada (and some of its subsidiaries) have applied to Ontario Superior Court of Justice for protection under the companies’ Creditors Arrangement Act (CCAA), in order to continue to restructure its business.

– Puerto Rico Files For Bankruptcy Protection In Largest Ever US Municipal Debt Restructuring: 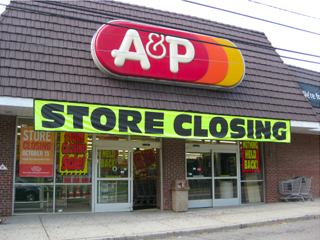 Back in December 2010, we were “stunned” when we learned that in a what was a clear case of a supermarket chain unable to pass through costs to consumers, the Great Atlantic & Pacific Company (“Great Atlantic”, “A&P” or the “Debtors”), which in 1936 became the first national supermarket chain in the US, would file for bankruptcy adding that “it is ironic that instead of passing through costs supermarkets are instead opting out to default”. Although perhaps even back then it was clear to A&P that the capacity of US consumer to shoulder higher prices is far worse than what the mainstream media would lead everyone to believe.

(Hognose) The media love the idea that the firearms market is in a state of collapse. This propaganda theme is being fed to them by Bloomberg-funded gun-ban groups, and by Bloomberg’s own propaganda arm, Bloomberg News, and, like any good propaganda campaign, it reinforces the presuppositions, biases, and slants of the intended targets (in this case, Acela Corridor newsmen) with a Narrative® that’s Too Good To Check™.

One writer who didn’t check his Narrative®, or much of anything else, was David Francis at Foreign Policy, the magazine/website that’s expert in strategy because it employs Beltway drones with degrees from The Right Schools. (Most of whom can only function overseas where Loud Slow English is understood).

The unintended consequences of a money-printed, credit-fueled, mal-investment-boom in commodities (prices – as opposed to physical demand per se) and the downstream signals that sent to any and all industries are starting to bite. The Baltic Dry Index has plunged once again to new record lows and the collapse of the non-financialized ‘clean’ indicator of the imbalances between global trade demand and freight transport supply has the real-world effects are starting to be felt, as Reuters reports the third dry-bulk shipper this month has filed for bankruptcy… in what shippers call “the worst market conditions since the ’80s.” 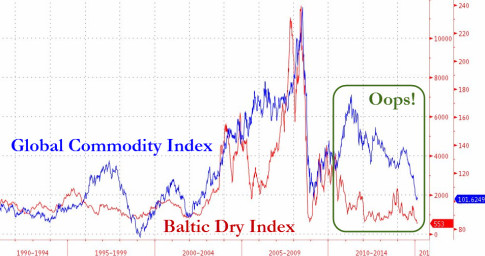 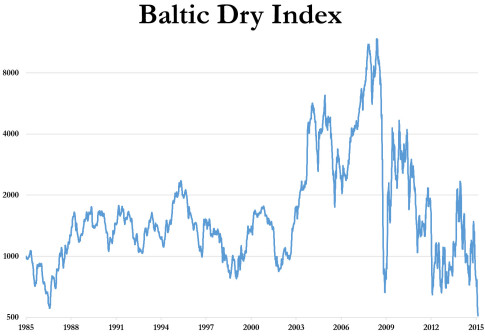 A third dry cargo shipper has filed for bankruptcy this month following a collapse in freight rates to historic lows in what shippers call the worst market conditions since the 1980s.

– RadioShack files for bankruptcy; Sprint to take over some stores (Reuters)

As credit markets have been indicating for 15 months, 94-year-old consumer-electronics chain RadioShack has finally pulled the ripcord…

RadioShack lists $1.2bn in assets and $1.38bn in debt. Additionally, Bloomberg reports that a post-bankruptcy deal is being worked on with Sprint.

On Sunday, a private company that drills in Texas, WBH Energy LP, and its partners, filed for bankruptcy protection, saying a lender refused to advance more money. There are many more to come.